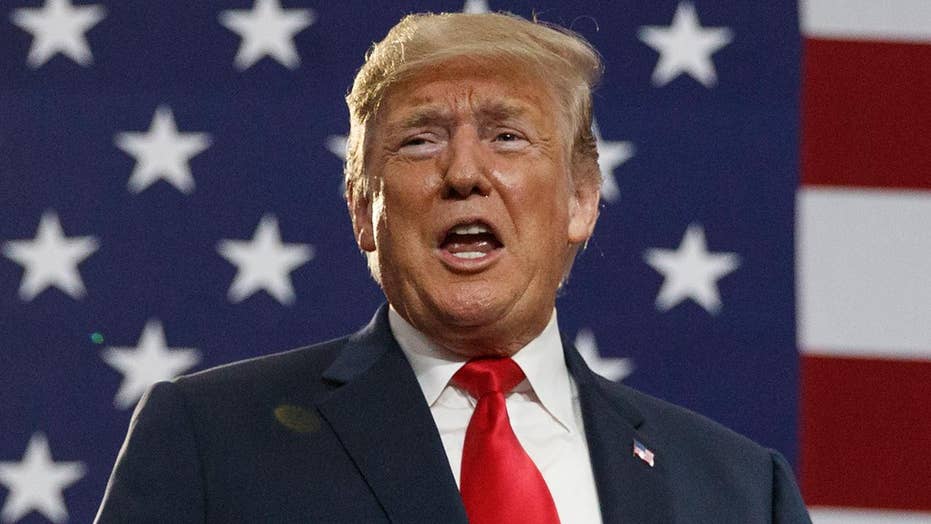 Georgia gubernatorial candidate Brian Kemp says the president's endorsement was like 'pouring gasoline on a fire.'

Results from voting Tuesday showed once again that few things have more power in American politics than an endorsement from President Trump. Empirical evidence proves it.

The Trump endorsement has changed the trajectory of races, given a tailwind to outsiders and unseated one incumbent while saving another. During this election cycle, nearly 90 percent of Trump-endorsed candidates won their primaries or special elections – a powerful record. But the topline doesn’t tell the whole story. The details do.

At the end of July, Iraq War veteran John James, a candidate in the Michigan Republican primary for the U.S. Senate that was held Tuesday, was losing to opponent Sandy Pensler. James began to make headway in the polls by mid-July, leading Pensler by 7 points, but President Trump’s endorsement increased his lead dramatically. Post-endorsement, James jumped in the polls before going on to secure a near 10-point victory in the primary.

In primaries (as opposed to special elections), President Trump’s endorsement has proven to be a lightning rod. Look no further than outsider Brian Kemp’s victory in Georgia’s Republican gubernatorial primary.

Lt. Gov. Casey Cagle was the frontrunner, maintaining a 7-point lead in one poll and falling behind by 3 points in another. President Trump’s endorsement was decisive, with Kemp climbing to an 18-point lead in polls and an eventual 39-point victory.

How does a candidate take a 3-point spread and turn it into an astonishing 39-point victory? The answer is simple: a Donald Trump endorsement.

New York’s 11th Congressional District Republican primary reveals a similar pattern. In late May, former Rep. Michael Grimm had a 10-point advantage over his competitor, incumbent Rep. Dan Donovan, in a race that became “a de facto contest of who will be the most loyal Trump supporter in Congress.”

Ultimately, Donovan scored the endorsement of President Trump, and in doing so, the overwhelming faith of voters in the district, who elected him as their nominee by a 27-point margin over the previously leading Grimm.

The tale of the incumbents is likewise illustrative of the power of a Trump endorsement.

The average re-election rate for congressional incumbents is typically above 95 percent in any given election cycle. In other words, unseating an incumbent member of Congress is an exceedingly difficult task – nearly impossible.

But in South Carolina’s 1st Congressional District, an impossible task was made possible by a Trump endorsement. In a shocking turn of events, Rep. Mark Sanford lost the Republican nomination to Trump-backed Katie Arrington by approximately 4 percent.

Though President Trump withheld his endorsement in the June primary, he endorsed Roby before the runoff – “a move that Roby backers say put the incumbent in early control of the runoff,” according to Politico. Roby eventually soared to victory with 67 percent of the vote.

The Trump endorsement is a powerful force to be reckoned with in races across the country. With the President’s pledge to campaign several days a week leading up to the November elections, Democrats ought to be nervous as America sees the Trump effect play out across the country. It has the power to turn a blue wave into a red tsunami.