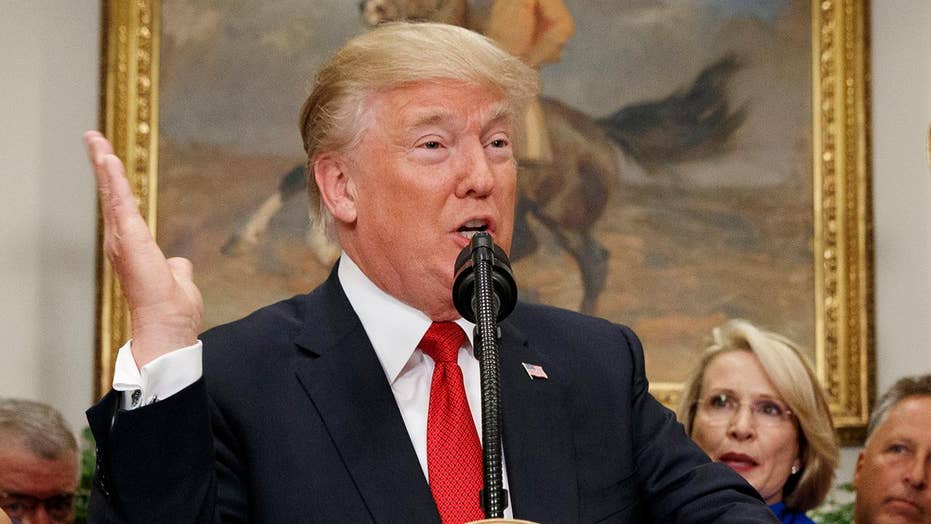 Trump seeks a new strategy for dealing with Iran

Now that President Trump has decertified the Iranian nuclear deal and asked Congress to decide if the U.S. should snap back economic sanctions on the Islamic Republic, he is faced with a critical decision on what future U.S. policy toward Iran should be.

Following an administration review of U.S. policy toward Iran now underway, the president should make a commitment to show greater support for the Iranian people in their struggle for freedom against the brutal and oppressive extremist regime that governs their nation.

The outlines of what future U.S. policy to Iran might look like point to positive and long overdue changes. The president’s speech before the United Nations General Assembly last month was one of several preliminary signs that the U.S. will be more assertive with the Iran, even to the point of promoting domestically driven regime change.

Trump’s U.N. speech pointedly described the Iranian regime as an enemy of its own people and a major contributor to regional instability. Responding to the speech, the head of the pro-democracy coalition known as the “National Council of Resistance of Iran” – Maryam Rajavi – characterized Trump as the first American president to ever “underscore the need for regime change in Iran by the Iranian people.”

Regardless of the specific steps that the Trump administration takes in the weeks and months ahead, there should be little doubt of the need for dramatic change. President Trump has already spearheaded a notable shift away from the conciliatory policies that led to the Iran nuclear deal and that effectively swept other issues, including ballistic missile development and human rights abuses, under the rug.

In a series of remarks delivered before his decertification of the Iran deal, President Trump said the Tehran regime is at odds with the aspirations of its own people – a position diametrically opposed to the Obama administration’s abandonment of the popular opposition to the regime, particularly since June 2009.

President Trump has said the Tehran regime is at odds with the aspirations of its own people – a position diametrically opposed to the Obama administration’s abandonment of the popular opposition to the regime, particularly since June 2009.

Perhaps the centerpiece in decades of flawed U.S. policy toward Iran is an overarching inattention to the Iranian people. President Trump’s U.N. speech already put more emphasis on these forgotten figures than any previous American president. He said, for instance, that “the day will come when the people will face a choice: Will they continue down the path of poverty, bloodshed and terror, or will the Iranian people return to the nation's proud roots as a center of civilization, culture and wealth, where their people can be happy and prosperous once again?”

The Trump administration has previously pointed to the desirability of regime change, with Secretary of State Rex Tillerson even telling a congressional committee in June that American policy should include “support of those elements inside of Iran that would lead to a peaceful transition of that government.”

But neither Tillerson nor any other White House official has gone as far as outlining the means by which this might be done.

There are some things that we should expect if the Trump administration is serious about following up on its preliminary statements regarding “peaceful transition” and the future choices that the Iranian people will face. The U.S. government must be prepared to make more concrete gestures of support for the entire citizenry of that country and, by extension, the opposition movement.

Toward that end, perhaps the most imperative such gesture is American leadership in the push for an international inquiry into past Iranian government crimes against the nation’s pro-democracy movement.

In the summer of 1988, approximately 30,000 Iranian political prisoners were executed, in response to a fatwa from Ayatollah Ruhollah Khomeini, the founder of the Islamic Republic. Human rights organizations have recognized the incident as a crime against humanity, but it has been largely ignored in Western media and certainly within Western policy circles.

The world has also ignored the Iranian government killings of protesters and opposition figures in Iranian Kurdistan, the Ahwaz province and in Iranian Balushistan. Add to it the brutal repression of the Green Revolution and the several assassination plots against Iranians in exile as well as the killing and torturing of demonstrators during the June 2009 protests in Tehran and other cities

President Trump has already proven himself willing to break the silence on the topic of regime change in Iran. It is not much of a stretch to ask him to also break the silence on some of the most blatant human rights violations in modern history. There is no more essential means of showing solidarity with the Iranian people than to join their call for justice on this issue, while also pushing for recognition of such crimes as representing the nature of the Iranian regime.

There is considerable reason for optimism about the Trump administration’s intentions, but until the veil is lifted on its policy review of our relationship with Iran, it remains important for concerned citizens and policy advocates throughout the world to keep up the pressure on the U.S. and its allies to make the necessary broad and dramatic changes.