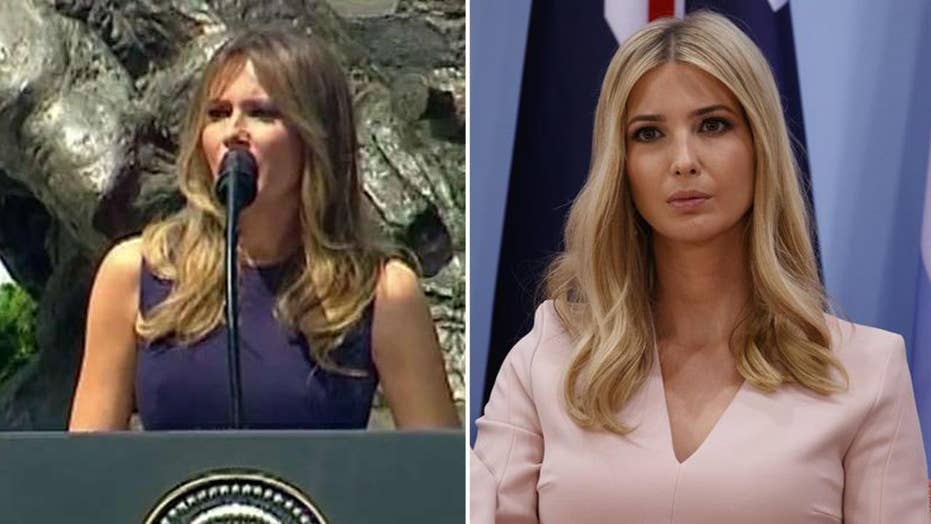 Melania and Ivanka Trump in focus during G-20 summit

Mark my words – the wind is turning.  Donald and Melania Trump are leaders – persistent, consistent, from the heart.  Some expected this, many did not.  But underestimating these two would be a profound mistake.

The first clear turn signal was the Inauguration speech.  It was concise, incisive, blunt and uncompromising.  No more blah-blah and calculated pampering, national self-derision or happy talk for the sake of media approval.  No more pretending personal differences and sincere opinions were bad, individual character and national sacrifice irrelevant, honor and history no longer material.

To those who wished America would again be proud of who we are, the speech affirmed that long tunnels do end and light does exist, even after years of economic and moral malaise, even with security threats mounting and international respect declining.  The future is what we make it; it should be an extension of our proud past, not a departure from it.

Then came the disciplined and bipartisan State of the Union speech.  Those clad in white on the Left, who dared not clap or stand, could barely believe their ears.  The president was compelling, honest, and inclusive.  He spoke to all Americans, not just supporters.  He validated them, offered answers, summoned higher angels.  The Left was confused.

Next came the Middle East Peace speech – direct and sincere and hopeful that leaders, Shia, Sunni, Jewish and Christian, might lay down swords for a moment, and imagine what might be possible.  Take a look at what those leaders said after that speech. Not in decades had such hope been entertained.  America’s pledge to lead is believed.  It should be.

Then came the Kennedy Center speech on July 1. Here, the president made a bold promise – to all Americans.  Faith – whatever your faith – will be respected.  "My administration will always … defend your religious liberty.”  He added, “We don't want to see God forced out of our public square," and “no one is going to stop you from practicing your faith or saying what's in your heart."

Then, the speech on Wednesday in Poland – a speech about what really matters, a signal as clear as Revere’s lantern from the Old North Church.  He spoke of Poland’s intergenerational commitment to freedom, holding democracy dear, living by faith and courage, preserving Western values.  And he spoke of America’s historic role in doing the same.

The continuity and progression of this president’s unfolding worldview as revealed in these speeches shows one of hope, expectation, impatient for results, and insistent on accountability.

How soon we forget – that leaders come from all walks, and that many are underestimated long before being appreciated.

Ronald and Nancy Reagan were “just B movie actors” – remember?  He was no “intellectual,” would trigger “Armageddon,” and was hopelessly sold on “American exceptionalism.” Nancy was even worse – just a former starlet.

The result of their leadership?  The most robust economy in decades, 18 million new jobs, a tax cut for all Americans, the end of the Soviet Union, and respect for America in the world.

Today, we have a new president and First Lady, again underestimated.  He has vision, lives by hope, and is willing to risk all for it.  He has done and said more in six months than most presidents in an entire term.

And Melania Trump, like Nancy Reagan, has been deliberately underestimated and diminished, her depth and talent unacknowledged.   Yes, she is a model.  Yes, she is a devoted mother.

She was also born in Tito’s Soviet-dominated Yugoslavia, in Slovenia; secretly baptized, strived, survived and became an American citizen.  She speaks six languages, including English, French, Italian, German, Serbo-Croatian, and Slovene.  How many of her liberal detractors can speak even three?  Or know anything like the hardship of her youth?  How many have her patience and poise?

Which brings us back to that “new wind” blowing, and what it means.  The Trumps are a team, like the Reagans.  And what they bring America may have been best foretold by another underestimated leader, one who ended up saving Western civilization.  “Kites rise highest against the wind, not with it,” Winston Churchill said. May we all.