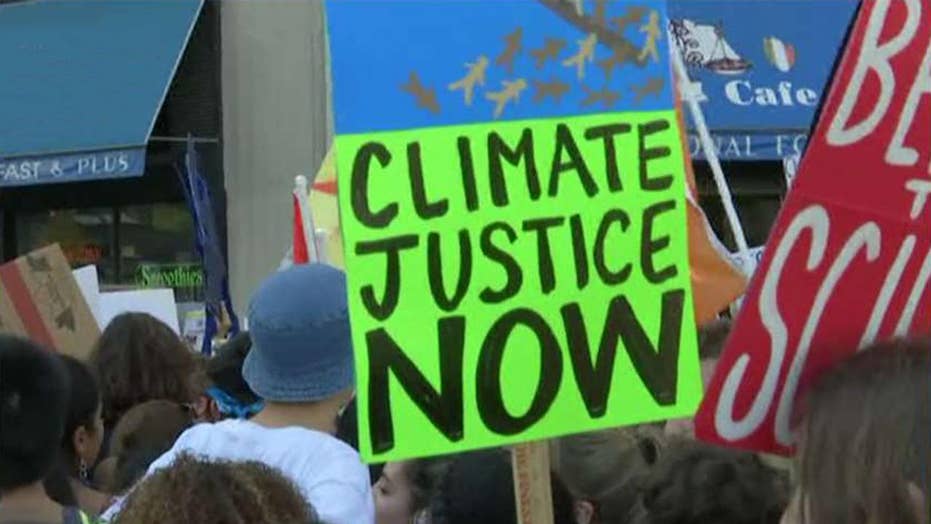 NYC students recently cut class for a climate change strike as more and more young people want to bring attention to the issue.

The United Nations and its thousands of ambassadors, staffers, non-governmental organizations (NGOs) and world community experts are all gathering in New York. And there is nothing the United Nations does better than meet.

They are terrible, for example, at peacekeeping. In parts of Africa, the U.N. peacekeepers are the ones raping the refugees. The U.N. has been unwilling or at least unable to stop the practice.

The U.N. takes human rights as seriously as they take peacekeeping. The United States withdrew last year from the U.N. Human Rights Council, which then-Ambassador Nikki Haley called “a protector of human rights abusers, and a cesspool of political bias.” The council, which has as members such bastions of human rights as China, Cuba, and Saudi Arabia, has passed resolutions condemning Israel more than every other nation combined.

CAROL ROTH: STOP SCARING OUR KIDS – THE WORLD IS NOT ABOUT TO END AND WE ARE NOT ALL ABOUT TO DIE

But what the U.N. does best, meet, it also does often. With annual expenditures hovering around $50 billion, there’s plenty of money for some great meetings. And there is no other cause more worthy of international meetings than climate change.

It’s an existential threat, as the 2020 Democrat candidates have often repeated. And we only have 12 years left to fix it.  Or 11. Maybe 10. Regardless of the science, or lack thereof, one thing is certain: in order to tackle climate change, the U.N. needs a lot of meetings.

Less than a year ago, 30,000 people attended a two-week event in Poland focused on climate change. With workshops, breakout sessions, soaring speeches, and weighty panels, the conference had a carbon footprint equivalent of an 8,000-person town for an entire year. One would hope those thousands of people accomplished something significant to justify such emissions.

So, they met again in April at a U.N. Climate Expo in Korea, but that was after the Nairobi U.N. Climate Assembly, held a month earlier in March which attracted 5,000 people from 179 nations.

What the U.N. does best, meet, it also does often. With annual expenditures hovering around $50 billion, there’s plenty of money for some great meetings. And there is no other cause more worthy of international meetings than climate change.

Those climate change activists sure are racking up the frequent flier miles!

After Korea came the June Abu Dhabi U.N. Climate Conference.  There, thousands of concerned jet-setting eco-warriors gathered around the central purpose: “to take stock of progress so far.”

Regardless of the science, or lack thereof, one thing is certain: in order to tackle climate change, the U.N. needs a lot of meetings.

They must not have been happy with the results because three weeks later was the next U.N. Climate Conference in Bonn. Put away the hummus and get out the Schnitzel.

The stated goal of the Germany conference was, and this is no joke, “to set the stage for raising ambition.”

The U.N. calls climate change “the greatest threat to human rights,” but seeing how their peacekeepers and human rights commissioners act, it’s not surprising their actions are more like HR meetings and corporate icebreakers.

After an entire year of “taking stock” and having “set the stage” on multiple continents at magnificent resorts, here we are in New York City.

And this time it’s serious. Maybe this U.N. conference will inspire us to “get on the same page” or “test the waters.” Regardless of the jargon, there will be meetings and memos and PowerPoints. And lunches and dinners and banquets. I looked online at the top 10 hotels in the city. Every one of them is booked solid.

Nothing prepares climate-change warriors for a conference like high-thread-count sheets.

Just in case the New York City conference doesn’t achieve all of its goals, fret not. The next U.N. Climate Conference is already on the books for December in Santiago, Chile. There, during an entire week, thousands of climate-change activists will do what they do best: meet. And that meeting may even generate a resolution.

It certainly will generate more meetings.

The fear-mongering rhetoric on climate change will continue to ramp up during our 2020 presidential election. More politicians will call for bans on meat, on coal, on cars. You will be told to alter your life, give up your property, change your diet. And in the midst of that radical posturing, as you are told of an imminent end of civilization, remember the world leaders, the ones who care the most about the issue, the ones leading the very charge, are unable to jump on a conference call.

Next time you are told to put down your cheeseburger by politicians who arrived in your town on a chartered jet, tell them they should leave the campaign trail and go work for the U.N. At least that way they get to be hypocrites and see the world.