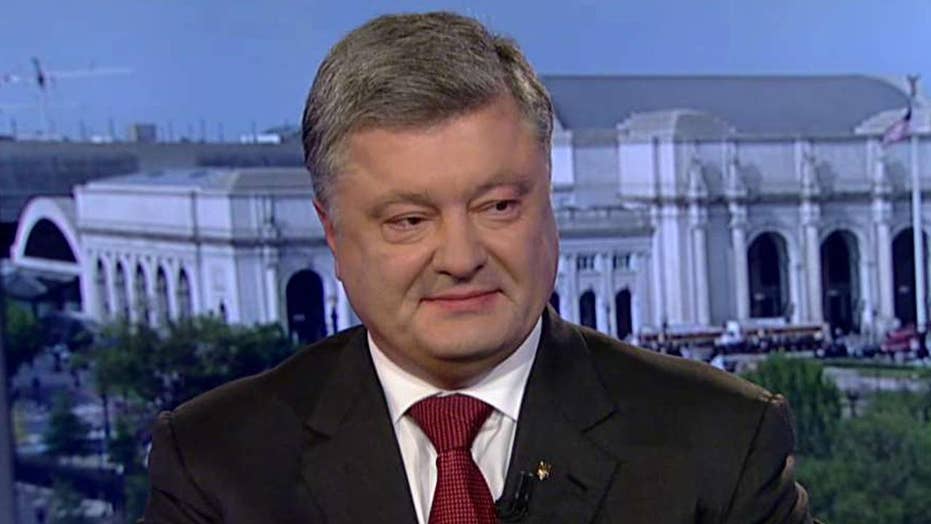 Ukraine’s President Petro Poroshenko called upon the United States and other nations to increase pressure on Russia to withdraw from Crimea and other territory it seized in its 2014 invasion by continuing the economic sanctions against Moscow and sending an international peacekeeping force to stop Russian soldiers and weapons from entering the country.

Speaking at the opening of the 14th annual Yalta European Strategy conference in Kiev, Ukraine’s president delivered a hard-hitting speech criticizing Russian president Vladimir Putin and calling upon the U.S. and other Ukrainian allies to supply more advanced weapons to counter Russia’s aggression. “History teaches us that Russia cannot be trusted,” he said.

Poroshenko said he intended to call for the creation of an international “friends of Occupied Crimea” when he addresses the United Nations General Assembly next week in New York. Aides to the president declined to elaborate on the proposal, or say what, specifically, such a group would do. But Carl Bildt, Sweden’s former prime minister and foreign minister, said he thought the proposal was aimed at “keeping the issue of Crimea’s occupation front and center.”

The president also alluded to his country’s plans next week to issue its first dollar denominated debt since Russia’s annexation of Crimea. The $2 and a half billion dollar bond issue is widely seen as a test for Ukraine’s reformed economy and the international financial community’s appetite for higher yielding sovereign debt. A billion of the bonds would be new money and the rest is a refinancing that would help the country to smooth its debt repayment schedule in the next few years. Giovanni Salvetti, of Rothschild, which is advising the Ukrainian Ministry of Finance on the bond issue, called the step “very significant and tangible evidence of the normalization of the Ukrainian economy and the vector for further investments.”

Ukraine has repeatedly appealed to the U.S. to do more to pressure Russia, in particular by supplying it with “defensive” weapons.

Despite Russia’s occupation of roughly a quarter of its territory, Ukraine’s economy has improved of late. Anders Aslund, an expert on Ukraine and Russia at the Atlantic Council, said that in the first quarter of this year, Ukrainian exports had increased by 25 percent, construction by 16 percent, and retail sales by 8 percent. Its deficit was now “under control” and the country has begun to enjoy modest economic growth, no small achievement given the political challenges it faces.

But Poroshenko has come under heavy pressure from Ukraine’s robust civil society and its foreign and domestic business community to do more to end endemic corruption in the country and, in particular, to stop government raids on private business that threaten to frighten away potential investors and stymy the country’s economic recovery. In a closed-door meeting Thursday with members of the American Chamber of Commerce and other business groups, Poroshenko pledged that such raids would end, but a business executive who attended the meeting but asked not to be quoted said the business community remained skeptical about the president’s willingness to implement that promise.

Ukrainian President Petro Poroshenko delivers a speech as he attends the 12th Yalta European Strategy Annual Meeting in Kiev, Ukraine, September 11, 2015. REUTERS/Ukrainian Presidential Press Service/Pool ATTENTION EDITORS - THIS IMAGE HAS BEEN SUPPLIED BY A THIRD PARTY. IT IS DISTRIBUTED, EXACTLY AS RECEIVED BY REUTERS, AS A SERVICE TO CLIENTS. FOR EDITORIAL USE ONLY. NOT FOR SALE FOR MARKETING OR ADVERTISING CAMPAIGNS. - GF10000201361 (REUTERS)

Ukraine has repeatedly appealed to the U.S. to do more to pressure Russia, in particular by supplying it with “defensive” weapons, but in a recent meeting in Washington, President Trump declined to do so, a refusal that was repeated by Defense Secretary Mattis in his visit to the Ukrainian capital this past week.

America has helped Ukraine meets its energy demands by supplying the country with coal once supplied by Russia. Over the weekend, Ukraine received its first delivery of American coal, some 62,000 tons of a promised 700,000 tons, at its port in Odessa.

In his remarks to the YES conference Friday morning, a gathering of over 350 diplomats, current and former government officials, analysts and journalists, Poroshenko said Ukraine would never accept Russian’s occupation of part of his country.

Noting that this annual conference was once held in Yalta, which Russia has annexed and vowed never to relinquish, Poroshenko vowed to hold next year’s conference in its traditional location. “Next year in Yalta,” he told the gathering. Crimea, he said, was “our Jerusalem.”

As he spoke, Russia was conducting the largest military exercises since the Cold War in neighboring Belarus near the border of Eastern Europe, a massive mobilization of forces that has prompted concern among American and European officials alike.

While several former officials attending the conference supported the president’s strong stand against Russian aggression, they criticized him for failing to tackle the corruption that has diminished his political popularity and credibility.

Former Secretary of State Kerry, criticizing Poroshenko’s proposal to establish a special office in his country’s Supreme Court to fight corruption, replied: “In our country, every court is an anti-corruption court.”