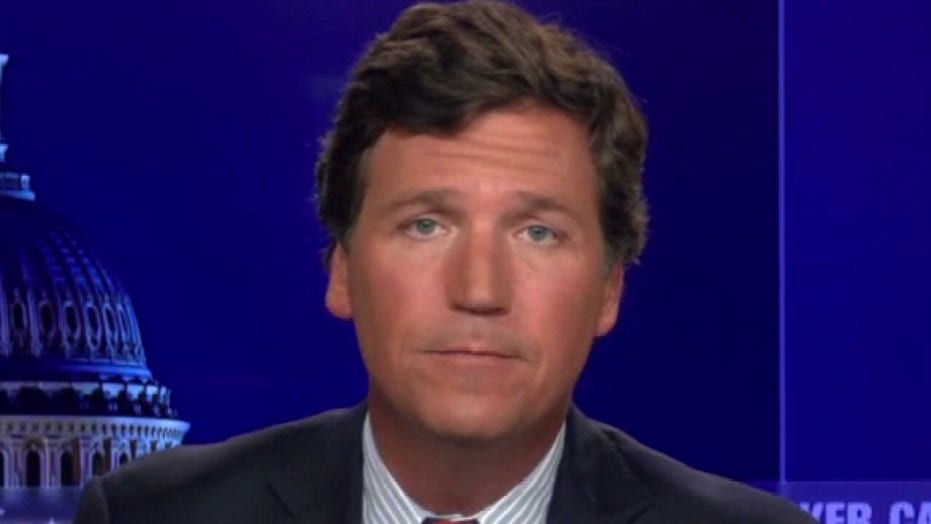 Tucker: Biden's making a mess of US economy

There are a lot of unprecedented things happening, but not all of them are shocking. For example, it probably shouldn’t surprise you that, once they got their hands on real power, the same lunatics who don’t believe in human biology immediately made a serious mess of our economy. It took them less than six months to do it. First, they acted like the U.S. dollar had no value. They spent money like they’d just printed it for the occasion, which, needless to say, they had. Predictably, we wound up with frightening levels of inflation, which for the record they still deny exists. But inflation does exist, as you well know if you live here. Corn prices, to name just one example of a staple commodity that’s now out of control, have risen by 50 percent just since January. But that wasn’t bad enough. The lunatics decided to make it worse. They paid millions of Americans more than they make at work, to stay home and do nothing. To justify doing this, they used the word "COVID" quite a bit, but it had nothing to do with the pandemic. They just wanted to break the system. And so they did. And the rest of us immediately wound up with a bewildering combination of rising unemployment in the middle of a severe labor shortage. So, at the very same time, we found ourselves with too many workers, and also too few workers. That doesn’t even make sense, but thanks to their policies, that’s now exactly what we have. And then, finally, in case 2021 didn’t remind you enough of a grimmer version of the 1970s, we now have serious gas shortages, in a country that just recently was energy independent. All along the east coast of the country today, people couldn't fill up their cars. The footage looks like Venezuela.

NBC NEWS: Gas shortages now reported in at least six states and expected to grow. They stretching down the highways as customers wait at the pumps. The Governor of North Carolina has declared a state of emergency. This station there ran out of fuel.

GAS STATION WORKERS: We are completely out of diesel and gas.

CBS NEWS: The shutdown of the pipelines is already putting airports in Baltimore, Charlotte and others on the east coast at risk of low supply.

An emergency? No. If they ran out of weed that would be an emergency. Don’t worry, says the New York Times. None of this is real, it’s a conspiracy theory. Your eyes are lying to you. You’re hysterical.

In a piece today, the New York Times reported that, quote, "Since the pipeline shutdown, there have been no long lines at gasoline stations." Then, apparently, someone in the New York Times newsroom found a working television and the paper deleted that line from the article a few hours later, without acknowledging it had included the line in the first place.

But for their readers on social media, who presumably will believe absolutely anything, the Times didn’t even bother to change the lie. That tweet is still up.

"Since the shutdown, there have been no long lines or major price hikes at gasoline stations."  Right. None at all.

In North Carolina, it was eight and a half percent. In metro Atlanta, the biggest city in the south, more than a fifth of all gas stations had no gasoline to sell. That’s an energy crisis.

Why is it happening? The official explanation is that some mysterious gang of cybercriminals hacked the software at a major American fuel supplier called Colonial Pipeline.

Colonial Pipeline handles more than two million barrels a day, that’s roughly half the East Coast's supply of diesel, gasoline, and jet fuel. That’s not a small problem in a country — like every country on earth — that still relies almost entirely on fossil fuels to survive. But don’t worry, says our new energy secretary, Jennifer Granholm, formerly the incompetent governor of Michigan.

LARRY KUDLOW: CYBER HACKING OF THE COLONIAL PIPELINE AND 'HAMAS SHOOTING WAR ON ISRAEL' ARE LINKED

"It’s not that we have a gasoline shortage. It’s that we have this supply crunch." Oh. It’s a supply crunch. And that’s very different from a shortage, at least in some theoretical way that’s apparently important to Jennifer Granholm.

So what is the White House doing to do about this "supply crunch" that is not a shortage?  Well, here's the answer from Anne Neuberger, the confirmed non-genius who serves as the deputy national security advisor for cyber and emerging technologies:

ANNE NEUBERGER, DEPUTY NATIONAL SECURITY ADVISOR FOR CYBER AND EMERGING TECHNOLOGIES:  So first we recognize that victims of cyberattacks often face a very difficult situation. They have to just balance off in the cost-benefit when they have no choice with regard to paying a ransom. Colonial is a private company and we’ll defer information regarding their decision on paying a ransom to them.

REPORTER: Did the administration offer any advice on whether or not to pay a ransom?

ANNE NEUBERGER: Typically, that is a private sector decision and the administration has not offered further advice at this time. Given the rise in ransomware, that is one area we’re definitely looking at now to say what should be the government’s approach to ransomware actors and to ransoms overall.

TUCKER CARLSON: BIDEN'S ECONOMY WILL MEAN NO ELECTRICITY OR SMALL BUSINESSES, BUT AMAZON MAY PAY YOU MORE

That’s the person protecting you from the cybercriminals. Colonial Pipeline, Anne Neuberger would like to remind you, is a, "private company." As a matter of principle, the White House doesn’t get involved in the affairs of private companies, unless of course, its employees were to use the wrong pronouns in a sentence, in which case the FBI would arrive with a swat team and make televised arrests. But in cases where the mere fuel supply of the entire Eastern Seaboard is at stake, Anne Neuberger and her friends at the White House strongly prefer a hands-off approach. They’re situationally libertarian that way.

What is this about? Well, you know. On some level — let’s be honest about it — the White House approves of this disaster. 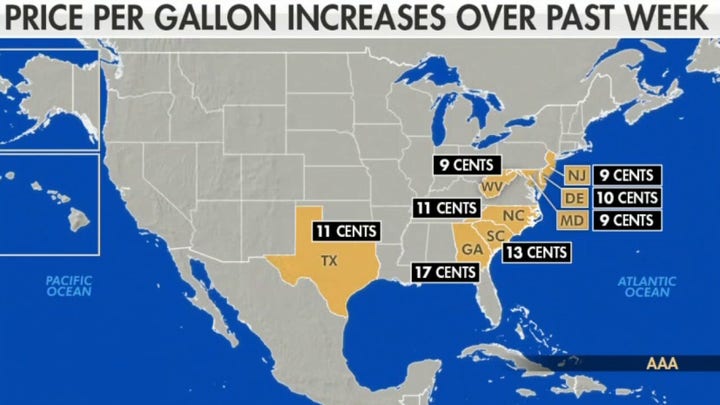 Yes, some gas stations are closed tonight. But soon enough, the lunatics plan to close them all — every gas station in the entire United States, shuttered forever, to make way for some new, as-yet-undefined means of transportation that will magically replace the gasoline engines we’ve used for more than 100 years. This is a green revolution. So who cares about some old pipeline?

Remember that on his first day in office, Joe Biden shut down a pipeline, that’s the first thing he did. It was the massive Keystone XL. Biden didn't wait for mysterious hackers to shut it down. He shut it down himself. And more than 11,000 people lost their jobs. And, by the way, gas prices went up. In case you haven’t noticed, gas prices have never gone down.

Nationally, Americans are paying about $45 billion dollars more for gas overall than they were last year.

Why? This is the result of policy decisions made by the new administration. This is the Green New Deal. We’ve got it already. And if you love gas shortages and electricity blackouts and $80 plywood, this is the program for you.

Tomorrow, the administration's Bureau of Labor Statistics will release new "official numbers" on inflation in America. A key part of that statistic is the Consumer Price Index, which measures the prices of a carefully curated selection of goods and services. If tomorrow’s Consumer Price Index number is flat, people on TV will tell you it's proof that inflation isn't real. Should you believe them? Well, before you take their word, take note of what is not included in the official consumer price index. Lumber, for example. Because no one in America buys building materials. So you should ignore this:

REPORTER: In a recent study by Fortune.com, the average price of lumber is now 280% higher than what it was pre-pandemic – which is causing the cost of construction to also increase by 30-40%. In a statement from the Division President of Homes by Towne Jenn Pemstein, he says for a typical 1,500 square foot home, just the rough lumber used for framing has increased from $14,000 per home to $29,000.

Typically, in the material world, where the laws of nature apply when the price of something jumps that quickly and that high, you’ve got a supply problem. Because it’s supply and demand. There isn’t enough of that thing to go around. Does that apply to lumber? Are there fewer spruce trees out there than there were a year ago? Are those trees growing more slowly than they once did? Have we seen a 280% in new houses being built? The answers: no, no and no. The answer, as you may have guessed, is that bad federal policies are distorting the price of everything in this country, from two by fours, to diesel fuel to corn dogs. None of this is an accident. Just as it wasn’t an accident when the power went out in Texas over the winter. It wasn’t a cold snap that did it, it was a federal policy that encouraged the state to rely on windmills that don’t actually work. So, it’s not a natural cycle. Somebody did this to us on purpose.

This article is adapted from Tucker Carlson's opening commentary on the May 11, 2021, edition of "Tucker Carlson Tonight."