Sinaloa is a province in northwest Mexico. It's directly across from the bottom of Baja California. It's not that far for the United States, and that's a bad thing because Sinaloa, Mexico may now be the single largest producer and distributor of the synthetic opioid fentanyl. Cartels are making fentanyl in mass quantities in Sinaloa now, but they're not making it for domestic consumption within Mexico. They're making it to export here. And you can see why. In the capital of Sinaloa, 11 pounds of fentanyl typically sells for around $15,000. In the United States, that same amount of fentanyl sells for more than $100,000. So you can see the incentive.

How much fentanyl is that? Well, just two milligrams of the drug can be lethal to a human being. That means 11 pounds contains nearly two and a half million fatal doses of fentanyl. Again, there's a major financial incentive for the drug cartels, which run huge parts of Mexico, to produce this drug and ship it north. And they are. If cocaine was the drug of the 1980s, we are now living in the fentanyl era, and the numbers show it.

Not so long ago, between October 2012 and October 2013, Customs and Border Protection seized just two pounds of fentanyl total at our southern border. Compare that to what we're seeing now. In the first eight months of this year – first eight months – the U.S. government seized more than 7,200 pounds of fentanyl, the highest amount seized by far. And keep in mind, that's likely just a small percentage of the fentanyl that came over the border since it is odorless and difficult to detect.

According to a recent report by the U.S. Sentencing Commission, "Since fiscal year 2015, the number of fentanyl offenders reported to the commission more than doubled each fiscal year, resulting in a 3,592%  increase."

Meanwhile, federal authorities recently announced that they have seized nearly 10 million counterfeit pills, and many of them were laced with fentanyl. That was all in a single year. News reports from Chicago say, as they do in so many cities, fentanyl has become an epidemic.

REPORTER: The pill on the left is Xanax. The one on the right is counterfeit. Not knowing the difference can be deadly. … The Drug Enforcement Administration warns of a dramatic increase in fake prescription pills flooding the market from criminal drug networks in Mexico. The drugs made to look like Oxy or Adderall are laced with fentanyl or meth – often in deadly doses. The DEA has seized more than 9.5 million counterfeit pills this year. And the head of the Chicago Division says they've seized more than 600 pounds of fentanyl.

So why are we telling you all this about fentanyl? Because the rise in the consumption of fentanyl mirrors the rise in the availability of fentanyl, which is causing the massive rise in deaths by fentanyl ODs. And all of that is a result of the Biden administration's immigration policy. When you open the borders, it's not just people who come in, it's massive amounts of fentanyl and other illegal drugs.

LEVIN: MIGRANT FLIGHTS ‘ALL ABOUT POLITICS,’ TARGETING SUBURBS: ‘THEY'RE NOT GOING TO NEWARK OR CAMDEN’

The latest data from the CDC shows that drug overdose deaths in the United States hit a new high, almost 100,000 deaths of American citizens during the 12-month period that ended in March of this year. How much more is that from last year? It's a 30% increase in one year.

So there are a lot of reasons this is happening, but one of the main reasons is government policy, which has made the population sedentary and depressed. Our government spent the last year, in case you haven't noticed, locking everyone inside their homes. And the result of that is that drugs are everywhere and major American cities are now unrecognizable. Take a look at this report from San Francisco's local news station. Watch.

REPORTER: The rate of accidental drug overdoses, hospitalizations and deaths is outpacing teams of crisis intervention specialists. … Fentanyl, a highly addictive synthetic opioid, much cheaper than heroin, entered the SF drug market a few years ago.

SF HEALTH OFFICIAL: Fentanyl has been the large driver for this increase in accidental overdose deaths

REPORTER:  The powerful narcotic was responsible for more than 500 deaths last year. It’s become the drug of choice for many users in San Francisco. KTVU has been documenting the epidemic for months. Many experts believe social isolation from the coronavirus may be contributing to the death toll.

So what we refer to habitually as our homeless crisis, which is bigger than it's ever been in American history, is not primarily about homes, it's not even primarily about mental illness, strictly speaking. It's mostly about drugs and drug addiction. 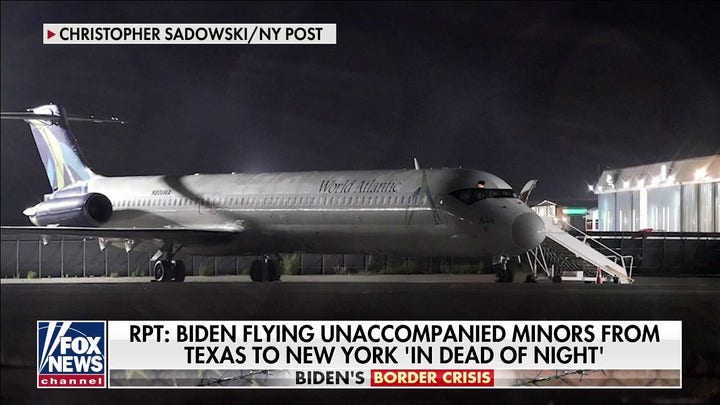 None of this should really surprise us. Our leaders have spent the last year dividing Americans from each other. The result is loneliness. They closed the churches, they closed the gyms. They forced people to stay apart from their family, friends and the people they're closest to. At the very same moment, the Biden administration has opened the border, allowing a massive wave of this highly addictive, deadly synthetic opioid to enter this country.

So what do you think happened? Well, an awful lot of people died, and this was a result of bad policy. But the Biden administration isn't simply ignoring the problem. They're not apologizing for it, of course. They're doing something even more destructive. They're making it worse. They're making it less possible for the U.S. government to control what comes across our border. You remember, they blamed the Border Patrol for daring to patrol the border on horseback.

Now they've nominated a genuine radical, an extremist call Chris Magnus, to lead Customs and Border Protection. How extreme is Chris Magnus? Well, during his confirmation hearings in Congress yesterday, Magnus was asked repeatedly whether what is happening at the border is a crisis. And repeatedly, he refused to say that it was. Tens of thousands of Americans are dying because of this border policy. And yet here's the man who the Biden administration would like to run the border responded.

SENATOR YOUNG: Do you believe we have a crisis at the southern border, yes or no?

MAGNUS: Senator, does it really matter whether we call it a major challenge, a crisis, a big problem?

SENATOR YOUNG: Do we have a crisis on the border? Yes or no?"

MAGNUS: Senator, let me assure you that no one believes there is greater urgency to this matter than I do.

SENATOR YOUNG: Are you saying there is not a crisis at the border?

SENATOR YOUNG: Is there a crisis or is there not a crisis at the border?

MAGNUS: Senator, I would say that my highest priority at this point …

SENATOR YOUNG: I didn't ask your priority. I asked to characterize the situation at the border. Is there a crisis at the border?

MAGNUS: What I’m certainly trying to convey is how serious I take the border and the amount of work that I want to put into addressing it.

So here's a guy who's totally beholden to the radical nonprofits, the NGOs, many funded by George Soros that control our immigration policy. He's so beholden to them that he can't tell an obvious truth under oath for fear of offending them. They're his real constituency, not you or anyone else who lives in this country. It's the radical NGOs that would like to open the border, knowing full well that doing so will result in the deaths of many thousands of Americans from the drugs that are also coming across the border.

But our leadership class is so decadent that they don't even acknowledge that drug use is a problem or a crisis, as Chris Magnus refused to say. They think it's fine.

So Chris Magnus says he's going to take the border very seriously, as you well know that he is going to do his level best to allow as many foreign nationals to come here as possible, and many will be bringing drugs. So this is more than just irresponsible, it's more than just ideological. It is reckless, it is dangerous. It is criminal.

The role of the federal government is not to protect economic migrants from Haiti. It is not to improve the living standards in other countries. It is not to pack the electorate on behalf of a specific political party. It has only one role and one role alone. It is to protect American citizens. It is to serve their interests. But they're not doing that. They're doing exactly the opposite.

This article is adapted from Tucker Carlson's opening commentary on the October 19, 2021 edition of "Tucker Carlson Tonight."