Tucker: America is splitting into two before our eyes

Some states are using science to guide their decisions and cautiously beginning to relax their lockdowns. But power-drunk politicians in the other half of the country are tightening their lockdowns even now.

The country appears to be splitting into two hemispheres before our eyes: There are those places where public officials are allowing science to guide their decisions; states like that are cautiously beginning to relax their lockdowns and finding no spike in illness as they do it. Those are the free states.

And then there’s the other half of the country, the places where you’re glad you don’t live right now. In those places, power-drunk politicians crow about science but resolutely ignore its findings.

They don’t read studies. They don’t care what the data say.

TUCKER CARLSON: LEADERS SHOULD BE THRILLED ABOUT ENDING CORONAVIRUS LOCKDOWNS. BUT THEY ONLY CARE ABOUT POWER

Their decisions are driven by ambition, political calculation and the pure animal joy of controlling other people’s lives.

Places like that are tightening their lockdowns even now.

Maybe no place in the country represents the authoritarian approach, the Chinese approach, more starkly than Los Angeles does.

L.A. County has more residents than New York City. But while New York has had close to 200,000 confirmed coronavirus cases, L.A. has had only about 35,000 in the whole county.

Now, the real figure is certainly much higher than that, that’s what we find every time widespread testing takes place. But that’s the point: so few people in LA have died, relatively speaking, that we’re not certain how many are infected.

We know they’re not sick enough to crowd hospitals. The city’s health care system has never come close to collapsing.

In Los Angeles, the curve is now flat, and it has been flat for weeks. It could reopen tomorrow and it should and it would if its leaders were following the science.

But it’s not reopening.

Just the opposite is happening. 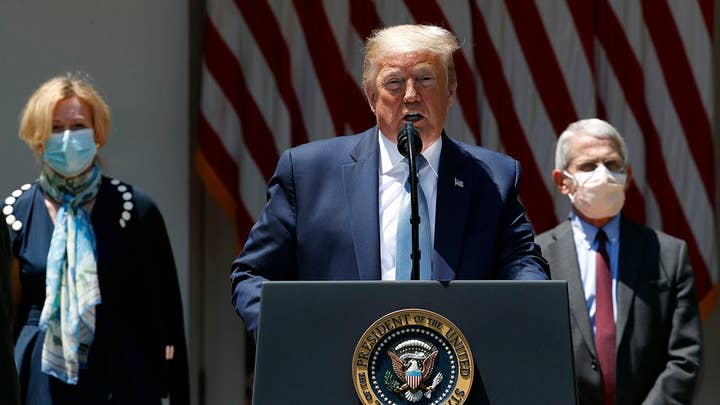 Los Angeles Mayor Gil Garcetti has now extended the lockdown through the end of July, which means at least two and a half more months of it.

Police say they’ve brought criminal charges against at least 60 “non-essential” businesses for the crime of going to work.

Countless other businesses have shut forever. They’re not coming back.

The citizens who remain stuck in Los Angeles are effectively hostages of the mayor.

Garcetti has demanded that anyone who goes outside, for any reason, as the heat rises in L.A.,  must wear a mask.

It goes without saying there no science to back up this order — or any of Garcetti’s so-called health decisions.

In fact, it’s possible that requiring masks outside will not prevent a single from being infected in Los Angeles.

But Garcetti doesn’t care. Anyone who disobeys this order will be punished.

But it’s just the beginning of Garcetti’s thoroughly bizarre restrictions. The more you know, the weirder it is.

Watch, for example as Garcetti explains that anyone who goes to the beach must make certain not to touch dry sand. Wet sand is fine. Dry sand is now illegal:

MAYOR ERIC GARCETTI: Beaches will open up this week for exercise and active recreation only -- in the wet sand, I guess, is a good way of thinking about it, not hanging out and tanning in the dry sand.

What’s the science behind this? Once again, of course, there is none. None.

This isn’t reasoned thoughtful policymaking. It’s the expression of an autocrat who decided he must look tough by “doing something” to get elected president which has always been Eric Garcetti’s primary goal.

It’s scary if you think about what this means. It means that America’s second-largest city has fallen under the total control of a neurotic megalomaniac, who’s terrified of dry sand.

It makes you think of the final days of Nicolae Ceaușescu in Romania: ranting at his subjects from the podium, imposing his strange obsessions on a helpless population.

America’s second-largest city has fallen under the total control of a neurotic megalomaniac.

It would not be surprising to learn that Garcetti is a compulsive hand-washer with a very strange personal life.

Guys like this are always the same once you scratch the surface.

So how long will Los Angeles have to live like this? Possibly forever, Garcetti announced this week:

GARCETTI: We’ve never been fully closed, we’ll never be completely open until we have a cure. But I do believe that we can take steps, but monitor those numbers, listen to the scientists and the medical professionals, and make the tough calls even when there’s criticism.

Now you may mock Los Angeles, and in some cases, it’s deserved, there are some flaky people who live there. -- Barbra Streisand’s in Malibu. But there are also an awful lot of normal, decent people in Los Angeles. Millions of them.

Some of them understand where Garcetti is taking them and their city and they’ve had enough.

A couple of days ago, a group of them came together. It’s totally bipartisan. Some of them are well-known liberal Democrats. Some are conservative Republicans and have been all their lives.

Others are labor leaders or middle-class voters.

The one thing they all have in common is the dead-certain knowledge that Mayor Eric Garcetti is poison.

Garcetti has allowed tens of thousands of mentally ill drug addicts to live on Los Angeles sidewalks and under overpasses – if you’ve been there recently, you know about this.

He’s also tolerated flagrant corruption in his own administration.

Now he’s shut the entire city down simply because he feels like it.

This group of citizens is going to try to bounce Garcetti from the mayor’s office. And they can! Under California law, politicians can be recalled by voters.

You remember that Californians did it to their governor, Gray Davis, 17 years ago. It worked.

Now a recall petition in California requires 330,000 signatures. And that, unfortunately, is where Garcetti has the advantage.

Thanks to his extended shelter in place orders, citizens aren’t allowed to gather these signatures.

So, under the guise of public health, Garcetti has stopped his political opponents from opposing him. And he’s not the only one. You’ve seen this happen in many states, Michigan, New Jersey, others.

Politicians around the country are doing this. As long as there is no vaccine, for the Wuhan coronavirus, they can remain in power -- unchallenged -- forever. It’s nice for them. They’re enjoying it.

But in Los Angeles Garcetti may have gone too far. The future of the city is at stake.

The recall-Garcetti forces are taking the issue, the issue of signatures, to court, trying to win the right to gather the signatures online. We’ll keep you posted on how they do because it’s important. But the bigger point is, these people not passive.

These are Americans who understand what has been taken from them, and they are trying to get it back. As they should.

We’re seeing this happening around the country, thank God.

In New Jersey, for example, citizens are still banned from assembling to worship together as they choose. That’s a direct violation of the First Amendment to the U.S. Constitution.

We asked the governor of New Jersey, Phil Murphy, about this when he came on our show. He said he wasn’t even really even thinking about the Bill of Rights when it comes to controlling his population because it’s in the way.