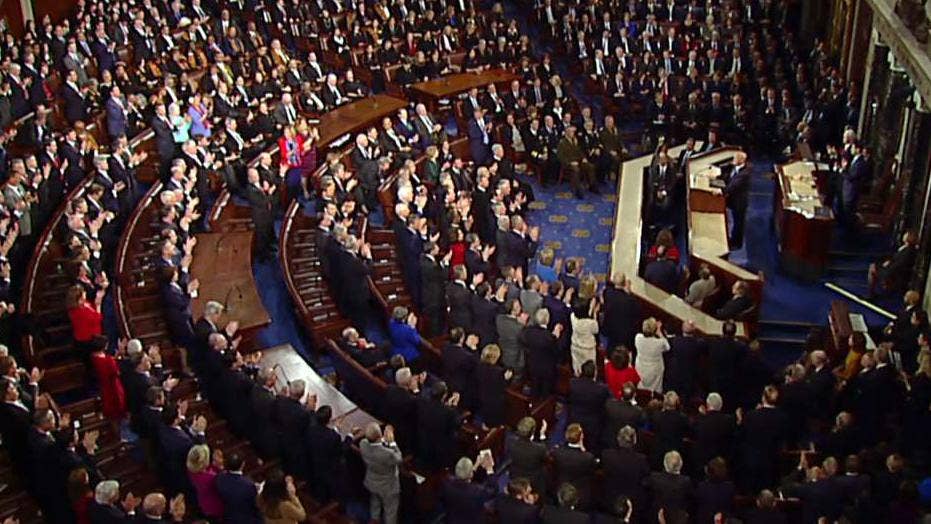 Part 1 of President Trump's 2018 State of the Union Address

President Trump salutes the heroism of America's first responders, calls upon lawmakers to deliver for the American people and touts the strength of the U.S. economy.

Tuesday night, President Trump delivered his first State of the Union address to Congress and to the nation.

The president highlighted his administration’s successes in its first year, touting the growing economy and the recent passage of the Republican tax overhaul. The president also shed light on his plans for policy-making going forward, specifically in the areas of infrastructure, immigration, and trade policy.

In full, this address was a departure from how President Trump has governed, being much more optimistic, and was clearly an attempt to avoid being tagged with the label of simply governing to satisfy his base.

This change in approach is welcome, important, and essential.

Clearly, the United States cannot be strong globally if we are divided, and President Trump’s first year proved he cannot get things done if he governs only from the right and demonizes his opponents.

That being said, it is now up to President Trump – as well as both parties – to put words into action, especially on immigration.

In President Trump’s own words, his immigration proposal is designed to protect and defend all Americans “because Americans are dreamers too.”

This bipartisan outreach should be applauded, but we need concrete action and process to achieve this goal, not just rhetoric.

Indeed, we are all Americans, we are the United States of America, and it is only by approaching our most critical issues with an inclusive notion that we can succeed and be the nation and the people we have always been and hopefully always will be.

It was strikingly clear at Davos that America’s global influence is fading as China is rapidly rising as a leader on the world stage. This was evident as leaders such as President Michel Temer of Brazil and Prime Minister Shahid Khaqan Abbasi of Pakistan praised Chinese investment in their countries and announced plans to partner more closely with China.

In light of the United States’ rapidly diminishing influence in the global economy, it is absolutely necessary that lawmakers on both sides of the aisle dispense with the political posturing and waffling, and instead work towards meaningful progress on both the national and international scale.

This means that President Trump must focus and engage on the issues he addressed in his State of the Union, rather than wavering on each new bill and decision. Likewise, the Democrats, especially Senate Minority Leader Chuck Schumer, must commit to compromises instead of abandoning opportunities to enact reforms at the eleventh hour.

This also requires that our leaders refocus on policy and stop waging politically-driven, partisan shouting matches.

To this point, Tuesday night’s State of the Union seemed to be a step in the right direction, as Trump used the highly anticipated speech to discuss his top policy proposals.

As the president said on Monday, “For many, many years they've been talking immigration and never got anything done. We’re going to get something done, we hope. It's got to be bipartisan, because the Republicans really don't have the votes to get it done in any other way.”

This sentiment was echoed in his State of the Union address, as he spoke about how the divisiveness that has defined Washington for too long—particularly around immigration policy – is simply not working.

Moreover, the Trump administration’s walk-back on the status of Dreamers demonstrates a willingness to turn this rhetoric into action, and work towards a compromise on immigration that satisfies both Democrats and Republicans.

President Trump’s focus on infrastructure is similarly promising for bipartisan collaboration, as well as for advancing national interests generally.  In Tuesday night’s address, the president gave more details about his long-standing promise to invest more than $1 trillion to revamp and rebuild key infrastructure throughout the country.

Though Democrats and Republicans diverge on the exact details of what they believe this effort should entail, both parties should be able to come together in support of improving infrastructure.

Senator Chuck Schumer has in fact affirmed his support for a broad infrastructure project—under certain conditions.

In an op-ed in published in The Washington Post earlier this week, Schumer wrote, “On Tuesday, if President Trump chooses a real, direct, federal investment in infrastructure, he will have a chance to pass an effective, bipartisan bill. We Democrats will gladly work with him on it.”

Ultimately, high-quality infrastructure and the vast number of jobs that such a project would create is not partisan or controversial and represents an opportunity for Washington to showcase its ability to make meaningful, beneficial progress.

Further, President Trump’s notable shift in his rhetoric on trade during his address tonight is promising in terms of both promoting bipartisan cooperation, as well as rebuilding the United States’ global economic reputation.

Though his speech at Davos and his State of the Union address both reinforced his administration’s tough stance on trade deals that they perceive as unfair, his latest rhetoric also reveals his willingness to move beyond his previous protectionist messages and work towards policies that allow the United States to benefit from global trade significantly, such as by potentially re-entering a renegotiated version of the Trans-Pacific Partnership.

Ultimately, President Trump’s apparent readiness to collaborate with both Republicans and Democrats to create positive policies that both sides can agree is exactly the kind of work that needs to be done.

Now, as he enters his second year in office, it is incumbent upon the president to actually honor these words, and not to waver and resort to the same divisive, hardline, bombastic rhetoric that we have repeatedly seen from him in the past.

Similarly, it is up to the members of Congress, both Democrat and Republican, to work with the president and with one another in order to create meaningful reforms that help everyday Americans and put the United States at the forefront of the global economy once again.