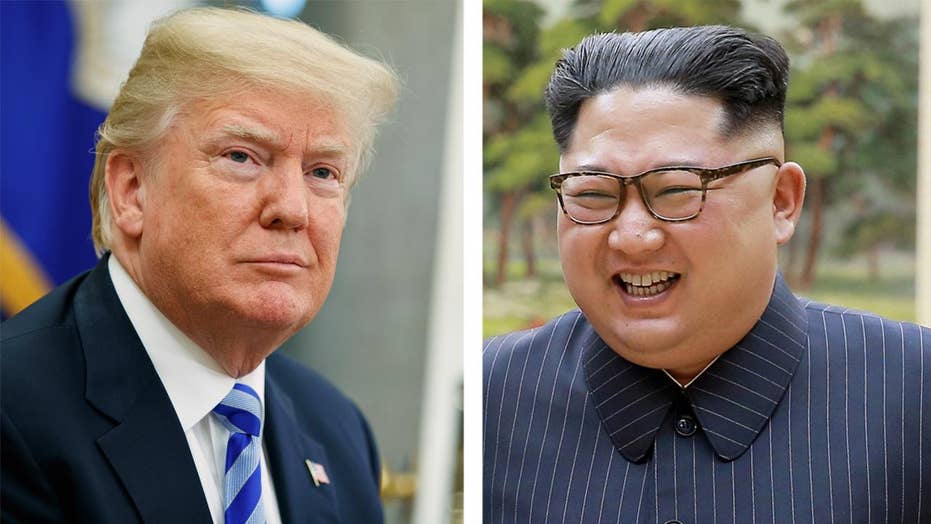 Let's make a deal: Trump-Kim summit back on

Analysts hope for major break-through with North Korea after a historic meeting inside the Oval Office; reaction from 'The Five.'

At the historic summit in Singapore with North Korean dictator Kim Jong Un, now back on for June 12, President Trump should demand that Kim make a commitment to begin working toward nuclear disarmament. This should be the single focus of the meeting.

Such a pledge by Kim needs to be credible, realistic and verifiable. Despite the siren song of making history, if President Trump smells a trap – that Pyongyang is once again stringing us along, making only aspirational promises that won’t ever be fulfilled – he should do what he has promised: cancel the summit again or walk out in the middle of it.

In an Oval Office meeting Friday with Kim Yong Chol – a vice chairman of North Korea’s Central Committee and one of Kim Jong Un’s most trusted advisers – President Trump agreed to hold the June 12 summit that he had canceled just a week earlier.

Significantly, President Trump tamped down expectations that the summit would end with a landmark agreement by North Korea to get rid of all its nuclear weapons, never build them again, and allow international inspectors into the country to verify its promises.

Instead, the president said his meeting with Kim Jong Un would be part of “a process” and could result in multiple high-level meetings.

Traditionally, presidential summits have been highly choreographed events where the U.S. president and the leader of another nation sign agreements already reached by their negotiators. President Trump has turned the process on its head, making the summit the opening round rather than closing one for what are sure to be very complex negotiations.

“It will be a beginning,” President Trump said Friday. “I don't say and I've never said it happens in one meeting. You're talking about years of hostility; years of problems; years of, really, hatred between so many different nations. But I think you're going to have a very positive result in the end.”

All of that is true. This means that President Trump and Kim are at the start of what could be years of talks on an array of issues. Dealing with these complex issues would take even the most seasoned of U.S. administrations years – if not decades – to try and solve.

But despite the long road ahead, the Trump administration must forge a bedrock foundation for any future agreements: an iron-clad pledge that North Korea will indeed surrender its nuclear weapons and long-range missiles in an agreed timeframe that includes rigorous inspections.

But I would argue that there is a plan to get us there – and keep America and our allies safe from North Korea’s growing nuclear and missile arsenal.

The next few days, heading into the summit, are going to be of historic significance. President Trump is at Camp David this weekend, getting briefings to prepare for the summit. And work is almost certainly underway by the U.S. and North Korean officials on a joint statement or declaration they can issue at the end of the summit spelling out what the two nations have agreed on.

The U.S. side must insist that such a joint statement lay out a path that concretely commits Pyongyang to getting rid of its nukes and the missiles that can send these horrible weapons of mass destruction to the U.S. homeland, potentially killing millions of Americans. Nothing less is acceptable.

The Kim regime has likely pressed Washington on this point, unwilling to make such a pledge before any potential meeting, demanding a summit as the price of such a pledge.

The president, if my theory is correct, made an important concession to save the summit. The challenge now is to ensure that Kim keeps is his word – something he, his father and his grandfather have not done on past agreements.

History tells us that this is where things with North Korea usually go wrong. We know the Kim family diplomatic playbook: stall for time and take as long as possible in any negotiation, ensuring that the North’s nuclear weapons and long-range missiles become even more deadly with each passing day.

Team Trump should make it clear to the North Koreans that such tactics won’t work this time because we are wise to their old tricks. That would also mean the summit could still fall apart, with President Trump canceling it again.

And the Trump administration must remain leery of the North even it gets an agreed upon text before June 12 for a joint statement to be issued at the end of the summit. That’s because North Korea could surprise us during the summit by demanding important changes to the text of a joint announcement. These changes could water down any nuclear disarmament agreement and turn concrete pledges into statements of intent that are meaningless.

This is where President Trump must stand firm, not falling into another obvious North Korean trap. He must insist that Pyongyang needs to keep its word. There’s always a first time for anything.

If Kim Jong Un persists in backing off from a strong nuclear disarmament pledge, President Trump must channel his inner Ronald Reagan, get up from the negotiating table and walk out. That’s exactly what President Reagan did in nuclear disarmament talks with Soviet leader Mikhail Gorbachev, forcing Gorbachev to back down.

While it might be tempting to push off a tough negotiation over North Korea’s nuclear program, we must remember it was that program that nearly brought East Asia – and perhaps the world – to the brink of nuclear war.

North Korea needs to know that the price of being a member of the international community is giving up its nuclear arms. President Trump must not waver on that.

And like a boxer entering the ring, President Trump must keep his guard up when he meets with Kim Jong Un, remembering that he is confronting a ruthless adversary who will try to take advantage of him in any way possible.