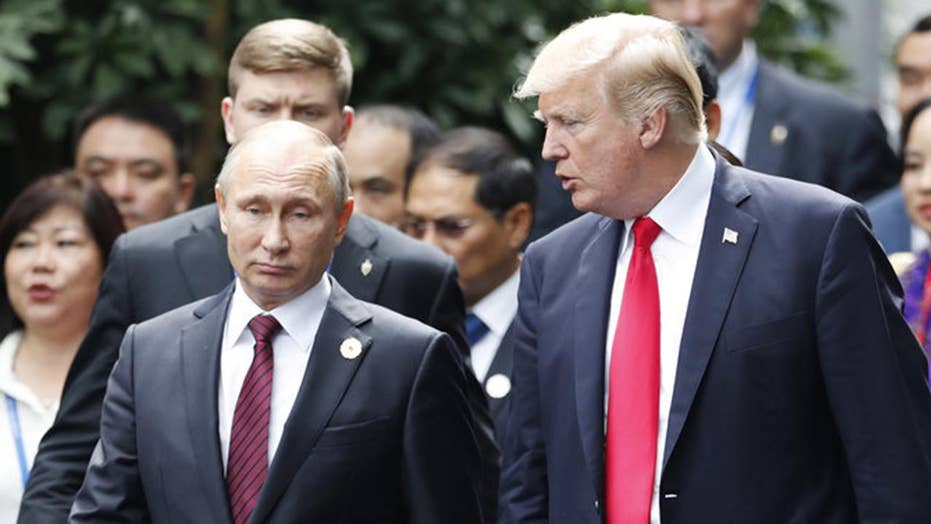 Will Trump ever get credit for cracking down on Russia?

Stephen Cohen, professor of Russian studies at New York University, says on 'The Ingraham Angle' that the goal posts are always being moved when it comes to how tough Trump needs to be on Putin.

Even the most diehard, anti-Trump partisan will have to admit that President Trump’s imposition Friday of tough economic sanctions against powerful Russian business and government leaders with ties to President Vladimir Putin is the very antithesis of someone “colluding” with Russia.

And any Russian officials who harbor false illusions about President Trump going soft must confront a harsh reality: Donald Trump does what’s best for America and is unafraid of standing up to Russia.

The impact of this bold move is likely to be considerable. Here is why:

First, the target list includes a state-owned Russian company called Rosoboronexport and another company with ties to Syria. President Trump’s message for Putin in sanctioning these companies is: We know what you are up to and will not be complicit in your profiting from instability in Syria.

Russia has prolonged the bloody Syrian civil war. It is supporting brutal Syrian dictator Bashar Assad, who has used chemical weapons against his own citizens, violates international law with impunity and is effectively responsible for the deaths of nearly half a million people.

As in Ukraine, Georgia, and when Russia tried to divide Americans against themselves through meddling in our last presidential election, Putin’s aims in Syria are indefensible.

America’s goal in Syria was to eradicate a threat to regional security, the so-called ISIS “caliphate.” President Trump, Defense Secretary Jim Mattis, members of the U.S. military and determined allies have nearly completed that job.

Russia’s goal in Syria has been expansionist, opportunistic, geopolitically divisive and – apparently – tied to financial gain for those around the autocratic Russian leader.

Notably – Putin’s recent sham election margin aside – most Russians do not want to be involved in Syria, even if Putin and his wealthy, profiteering and oligarchic friends do. Maybe this set of sanctions will give Putin another reason to rethink his involvement there.

President Trump’s second message to Putin with the new sanctions is more direct: Stay out of our elections. Putin and his cadre of neo-Soviet ne’er-do-wells have meddled enough, and President Trump himself knows the pain that intrusion on our sovereignty has caused him.

Russian interference in our 2016 presidential race has threatened to distract our entire nation from larger purposes, historic unity, and our common identity, goals and ideals. Putin is no friend of American democracy.

Friday’s sanctions also hit at least one wealthy oligarch who was reportedly close to the disgraced, short-lived former Trump Campaign Manager Paul Manafort. That oligarch is Oleg Deripaska. President Trump’s apparent message in targeting Deripaska is that corruption is indefensible – and he won’t defend it.

The fourth message to Russia nested in new U.S. sanctions is broader. It should give Putin a stutter step. President Trump is saying “this is not over.” The carrot of a presidential meeting with Putin exists, but sticks in our pile are many and will be used – with increasing frequency.

By imposing sanctions, President Trump is telling Putin that Russia must get its mental, moral and legal house in order; stop saber rattling in the Baltics, Middle East and around the world; stop the belligerent military build-up in Kaliningrad; stop hyping maps of mock missile attacks on Florida; and start acting like a responsible permanent member of the United Nations Security Council.

In short, President Trump is prepared to treat Russian leadership as the good Russian people deserve to be treated – with respect. But he will not counsel or be party to further destabilization of the world order.

The truth is often persuasive, and should be here. Modern-day Russia is not the Soviet Union, even if former KGB agent Vladimir Putin wants it to be so, for whatever prestige that idea might offer him.

Putin is an Old World autocrat and he is making Russia persona non grata around the world by allying himself with Iran, North Korea, Assad’s Syria and publicly corrupt leaders on the world stage.

Putin makes no points in the free world by encouraging instability in Serbia, Macedonia, Albania and Bosnia; stirring ethnic Russian minorities in neighboring nations to be loyal to Russia rather than the countries where they live; reportedly approving shadowy assassinations; and refusing to reverse illegal assaults on the sovereignty of Ukraine and Georgia.

Russian trade with the United States is one twentieth of our country’s trade with China. Russian oil is plentiful, but we don’t need it. American oil and natural gas are more plentiful, and we are prepared to strike deals to support NATO allies, including the beleaguered Baltic
States.

Russia is increasingly isolating itself, and is also increasingly viewed by the Trump White House and Europe as a belligerent. True to Putin’s KGB past, he is reinforcing this caustic and ignoble view at every turn. What Friday’s sanctions say is: Mr. Putin, you are digging yourself a geopolitical hole. Time to reverse course.

Here is the kicker, a savory irony to beat all ironies. These latest Trump sanctions on Russia suggest – despite the mainstream media’s wish to minimize, mitigate and ignore facts – that the Trump White House and Special Counsel Robert Mueller, along with Russia’s critics in Congress, increasingly see the world through one prism.

The color Russia is painting itself, for all of them, is dark and darker, not brighter. While Putin aims to divide Americans, he is in fact uniting us.

President Reagan denounced the Soviet Union as an “evil empire.” Putin’s aggressive behavior around the world has once again earned his government that unseemly title.