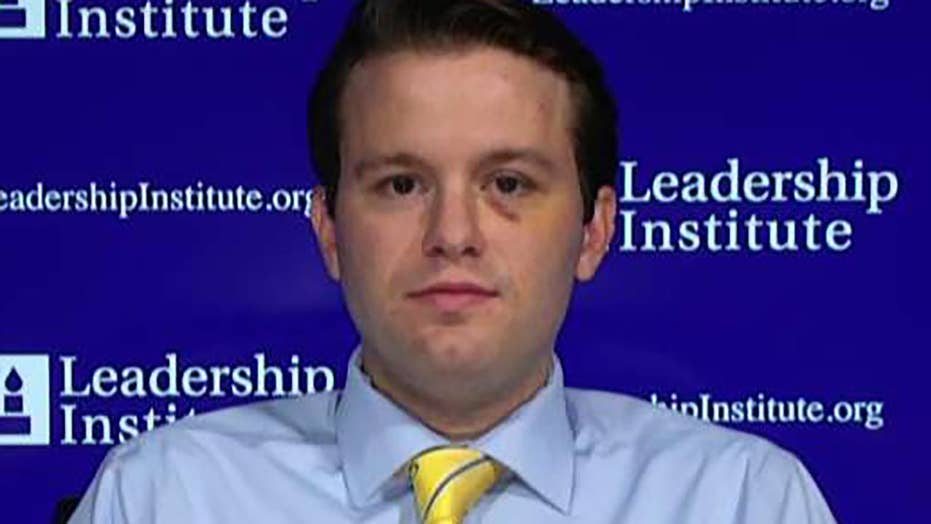 Police arrested a suspect Friday in an attack on the University of California-Berkley campus against a volunteer for the conservative organization I head. This is very welcome news – violence against anyone for his or her political views must not be tolerated.

The attack last week on Hayden Williams was caught on video. Williams was on the university campus peacefully recruiting students for Turning Point USA – the conservative grassroots activist network on college campuses that I founded in 2012 and lead as executive director.

Police identified the suspect they arrested as Zachary Greenberg, 28. Arrest records show he was charged with assault with a deadly weapon and attempting to cause great bodily injury.

Williams was doing nothing wrong when he was attacked. The unprovoked attack on him was graphic. The face of his attacker was clearly visible.

The incident was so graphic it produced the kind of video that news programs typically love to air over and over. But before Friday’s arrest, NBC News, CBS News and ABC News effectively ignored the story. It’s been largely left to Fox News to shine a spotlight on this violent and hate-filled attack.

I went to the Berkley campus Tuesday to support our student organization leaders and members. I asked the question: What kind of response would there have been if a person wearing a Make America Great Again hat – worn by supporters of President Trump – had punched a liberal activist?

The truth is that while those on the left – particularly the far left – claim to be tolerant and welcoming of diversity, in reality many are quite intolerant of anyone not embracing their radical views.

The answer is obvious. A hysterical anti-Trump media would have blamed the president for motivating the attacker, saying the assault was all Trump’s fault. There would be countless commentaries condemning the president.

The lack of media coverage for the Berkeley attack before Friday’s arrest isn’t a surprise. The left-wing media support the overall movement to tear down traditional American values. An assault like the one experienced by Williams doesn’t reflect well upon opponents of traditional values – so it gets little notice.

More to the point, the assault makes it all too clear how many on the far left are filled with intense rage at supporters of traditional values.

Against prevailing winds, The Washington Post published a story Wednesday about the attack. The newspaper included a quote from Williams given in a Fox Business interview. Williams said: “There is a certain culture that is especially hostile on Berkeley’s campus, and across the country, to conservative students. They’re willing to use violence if they think you’re being too controversial.”

This is a sentiment that I have heard and witnessed many times since President Trump took office. The president has become such a lightning rod for everything those on the left despise that some feel justified in saying or doing whatever they please under the premise President Trump is worse – so anything goes!

The kind of intolerance that was captured on video at Berkeley isn’t something new. Some on the left detest the idea of an America that is centered on free markets and constitutional principles. Some go so far as to embrace socialism and a radical restructuring of our society to give government far greater power over our lives and diminish individual liberty.

I’ve experienced this intolerance in many forms since I started Turning Point. Conservatives are branded bigots and we are falsely accused of hate speech when we express traditional values and ideas that have made America the greatest country on Earth.

What is new is having a president of the United States who will not pander or cower in the face of false attacks and smears from the left. President Trump identifies the hatred and intolerance expressed by his radical opponents and names it for what it is.

President Trump is performing a political exorcism on those who prefer to turn the U.S. into a socialist country – a country where the American Dream would become the American Nightmare.

The president understands the growing embrace of socialism by many Democrats is a threat to our very way of life and would destroy our economy and rob us of our freedoms – and make it impossible for future generations to enjoy a way of life that is the envy of people around the world.

President Trump does not want to see America become Venezuela or Cuba. Two socialist failed states in our hemisphere are enough.

I have said before that the left hates the idea that some people have other ideas. That’s a great little soundbite that works on T-shirts and social media, but it means something much deeper.

The truth is that while those on the left – particularly the far left – claim to be tolerant and welcoming of diversity, in reality many are quite intolerant of anyone not embracing their radical views.

Flying the socialist banner, these radicals are on a mission to eradicate everything in the country that does not conform to their world view. They are blinded to reality by the failed socialist ideology that has oppressed and impoverished people around the world.

One of the tactics of exorcism is the repetition of prayers. Perhaps we at Turning Point should have our students on campus stand and repeat in unison: “One nation, under God, indivisible, with liberty and justice for all.”

Those words more than any others ought to cause the demon that makes a person detest everything about America and Western Civilization to show itself. Those words make the demon angry.

Those words can help to expose to every American just how great the threat is and why it is so important to stand together against anyone who tries to strike a blow, physically or otherwise, against American values.