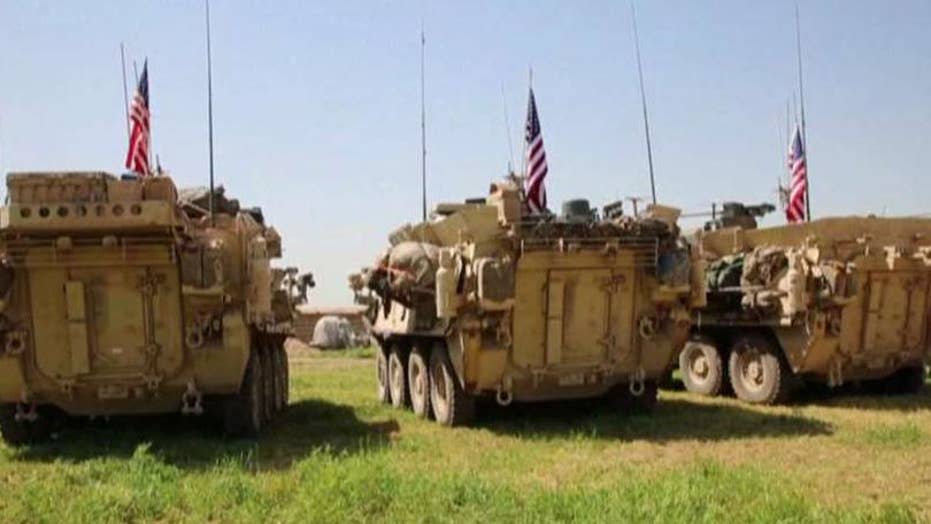 White House: US mission in Syria coming to 'rapid end'

In written statement, White House says U.S. and its partners are committed to eliminating remaining ISIS presence in Syria not yet eradicated by the American-led coalition; reaction and analysis from Fox News senior strategic analyst Gen. Jack Keane.

The announcement by the White House on Wednesday that “the military mission to eradicate ISIS in Syria is coming to a rapid end” is the right approach to take. President Trump understands that the last thing we need is to get sucked into another Middle East war that could go on for decades.

The White House announcement came shortly after the Washington Post reported: “President Trump has instructed military leaders to prepare to withdraw U.S. troops from Syria but has not set a date for them to do so, according to a senior administration official.”

But exactly when U.S. troops will withdraw completely from Syria remains unclear, with some comments from the White House contradicting others.

For example, the New York Times reported: “The White House said on Wednesday that the United States is committed to continuing to fight the Islamic State in Syria, signaling a retreat by President Trump from his insistence that the 2,000 American forces there quickly return home from the conflict.”

It seems clear that there’s division in the Trump administration – leave Syria soon, or leave later. But leave we must, and it would be a mistake for the president to yield to those favoring a prolonged exit.

President Trump – at least if you read over his statements and policy goals during the presidential election campaign and as commander in chief – has always made it clear he did not want to follow our long wars in Afghanistan and Iraq with involvement in yet another long war in the region.

There are many reasons why the president is right to favor an exit from Syria.

First, America has fulfilled its primary mission of defeating and destroying the Islamic State. With ISIS now occupying little to no physical space in Syria or Iraq, we must now focus on other ways this terrorist organization could strike America and its allies.

For example, ISIS has become a powerful force online, trying to win followers and inspire terrorist attacks and fear around the world. Washington’s strategy must change, going from military strikes where ISIS operated to waging a war in cyberspace.

Second – and this a key point – President Trump is in many respects a foreign policy realist. And that realism demands a prudent and tough assessment of America’s foreign policy moves and expenditure of resources.

Washington is engaged on a global chessboard that include staring down Russia in Europe, battling China across multiple domains in Asia, trying to confront a growing North Korean nuclear threat and many other challenges around the world.

While other nations in the Middle East have the resources and wealth to settle into a long-term nation-building and peacekeeping mission in Syria – something that is in their very clear national interest – Washington has global challenges that sadly take precedent.

And then there are America’s challenges in Asia, which are intense and will likely occupy the bulk of the Trump presidency’s foreign policy capital for almost all of his hopefully eight-year term.

Over the long term, Washington faces a rising China that seems determined to dominate the Asia-Pacific and bigger Indo-Pacific region. This challenge – which must be addressed with the majority of America’s economic, military and diplomatic might for perhaps decades – must come first.

North Korea, for the short- to medium-term, will also need to be addressed. It was just last year that Washington was staring down a very real challenge when Pyongyang tested over 20 advanced missile platforms and a hydrogen bomb, and the prospect of military conflict was high.

And while North Korean dictator Kim Jong Un is offering to meet with President Trump, this newfound sense of détente is most likely a play for more time, to make sure North Korea truly has a nuclear weapon that can strike the U.S. homeland in the months to come.

There is, however, a bigger point in President Trump’s eventual withdrawal of U.S. forces from Syria, as clearly illustrated above. While the United States is a global superpower with a military that is likely the most powerful in all of history, America is not able to do everything, all the time, for everyone. In fact, such a message resonated with the American people, and is one the reasons I and millions of other Americans support the president.

Our nation has been at war, in one form or another, since the Twin Towers fell in the Sept. 11, 2001 terrorist attacks. Our armed forces, and the people deployed overseas and around the world, have borne an incredible burden.

But after all these years, America has given far too many of its brave men and women to wars in the greater Middle East that have gone on for too long, while nations around the region are happy to stay on the sidelines.

What must happen now is for Team Trump to organize a grand coalition of partners to ensure that ISIS never returns and that the Syrian civil war comes to an end quickly.

This means working with nations around the region that are friends, but also rivals – like Russia and Iran – that also have a stake in this critical geographic region. The goal should be to make sure stability returns, that the people of this war-torn nation can return to their homes, and that they truly have something to come back to. Otherwise, chaos will fill the void – no matter how many troops are on the ground, from any nation.

But above all else, America must resist the siren song of doing everything for everyone in all places around the world – and we must focus on our core national interests. For if we don’t, Washington will never achieve any of its goals, and will become fated to bankruptcy along with a populace that is warn out by war. It is a fate that we must avoid –at all costs.