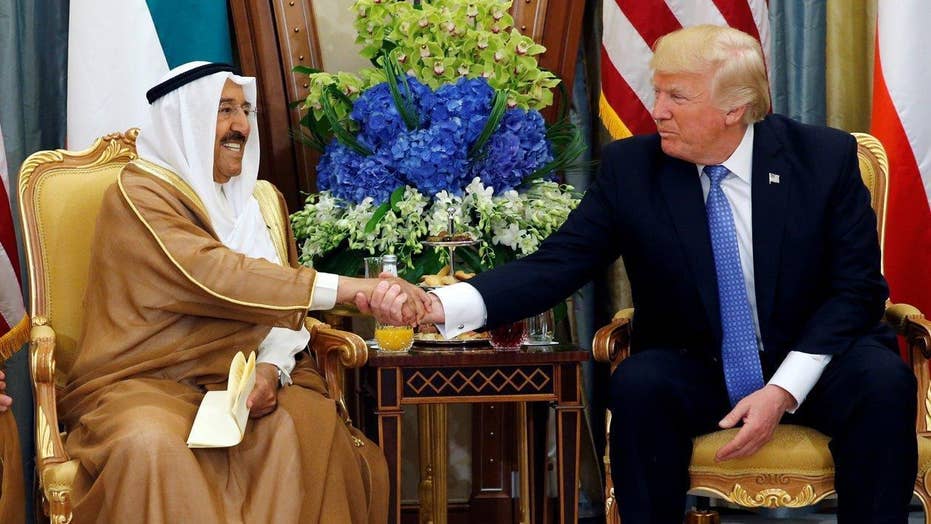 'In the Land of Invisible Women' author weighs in

President Trump’s trip to one of the most conflicted regions in the world reveals a far-sightedness, focus and pragmatism that few detractors can discredit. Within the region - where I have traveled recently - the President’s visit is welcomed as a thrilling and meaningful opportunity by both the people and leaders in the Middle East.

During a visit to Giza, Egypt, last month, I was approached by a number of uniformed Egyptian Army officers, Kuwaiti officers in civvies and non-military Arab men in trendy jeans, neon T-shirts and fresh-from-the-barber buzz-cuts. When I asked them what they thought of President Trump, I was greeted with beaming smiles and thumbs-up all round.

Trump's first foreign tour represents a longed-for shift in foreign policy from the eight years of the Obama Doctrine, which was viewed in the Middle East as a policy of pandering to the Shia Islamist superpower of Iran at the expense of traditional Sunni allies.

A few days later, I visited Al Azhar University’s Observatory in Cairo and again, I asked about the American president.

“We know Candidate Trump is not President Trump,” I was told by one scholar and university leader.

During my time in Egypt, I repeatedly encountered similar responses: President Trump is respected and seen as a welcome change to his predecessor. And his first foreign tour represents a longed-for shift in foreign policy from the eight years of the Obama Doctrine, which was viewed in the Middle East as a policy of pandering to the Shia Islamist superpower of Iran at the expense of traditional Sunni allies.

President Trump’s dramatic tour and speech condemning extremist terror is no less welcome than President Obama’s speech at the University of Cairo in June 2009. Obama’s speech, however – in spite of its rhetorical splendor – was not matched by action. Many of America’s traditional allies were horrified to see the Muslim Brotherhood come to power in Egypt and the U.S. seek an accommodation with Iran under Obama’s leadership.

This is why President Trump has been so well received in the region. Unlike Obama, Trump is seen to possess ‘wasta,’ best translated from Arabic as “influence,” or, more crudely, “pull.”

In the Middle East, wasta matters more than guns, gold or even lineage. And President Trump, with his non-rhetorical, pragmatic and business-like approach, is viewed as someone who knows where to throw his wasta.

The president arrived in Saudi Arabia as the final $100 billion of a $300 billion arms deal was finalized. The new armaments will be focused on curbing the hidden hands of Iran, both in deterring ISIS at the Kingdom’s northern borders and taming the Houthi insurgency that is devastating next-door Yemen.

In Israel, reassurances of a U.S. commitment to contain and disempower the over-confident Islamic Republic of Iran will be welcome. An Israeli minister and a former IDF General have openly called for the assassination of Iran’s ally Assad after the revelation that his regime is using crematoria to conceal and/or accelerate the execution of protestors.

The contrast between President Obama’s debut in the Middle East and President Trump’s could not be greater. Where Obama was about oratory, Trump is about execution. Love him or hate him, President Trump leaves a besieged White House behind to find solidarity in one of the world’s most conflicted and complex regions.

As the president goes about his business – exercising America’s wasta to best effect – let us hope we Americans at home will hopefully gain a refreshing perspective, both of the Middle East, and of ourselves.