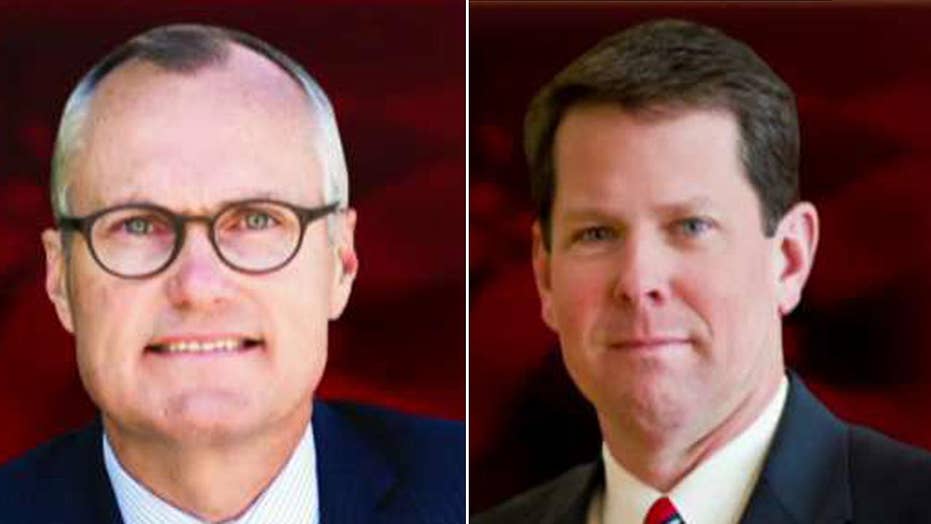 Lt. Gov. Casey Cagle of Georgia, a Republican who spent most of the past 12 years building up political chits under two different GOP governors, expected to become governor himself this year.

With 99.9 percent of precincts reporting, Kemp became the state's Republican gubernatorial nominee with 69.5 percent of the vote – while Cagle captured only 30.5 percent.

Vice President Mike Pence campaigned in Georgia over the weekend for Kemp. And now – despite the prognostications of some pundits – Kemp is the odds-on favorite to win election as Georgia’s next governor in November. He will face Democrat Stacey Abrams, who hopes to become the first female African-American governor in the nation.

Trump tweeted on Kemp’s behalf, including one saying: “Brian Kemp, who is running for Governor of Georgia and has my full endorsement, is campaigning tonight with VP @mike_pence. Brian is very strong on Crime and Borders. LOVES our Military. Vets and the 2nd Amendment. He will be a GREAT Governor!”

That and similar presidential tweets no doubt were persuasive.

Trump’s endorsement alone may not be enough to carry any candidate to victory. In the races where it has appeared to make a difference, it has come as late as Election Day.

But with the president enjoying overwhelming favorability among Republican voters -- 88 percent job approval, according to a Wall Street Journal/NBC News poll released this week -- it’s clear that, in the primary at least, it is better to have him on your side than against you.

Though he started the race with the highest name recognition of any candidate on the GOP side in a multi-candidate field and the backing of outgoing Republican Gov. Nathan Deal and the National Rifle Association, Cagle couldn’t pull off a win.

Normally, those endorsements – merging the support of the powerful and entrenched interests dominating the scene in the state Capitol in Atlanta with the Second Amendment enthusiasm common to rural Georgians – should have been enough for Cagle to romp to victory.

Instead it was Kemp -- who based his campaign on Trump-like themes like the need to crack down on “criminal illegals” -- who prevailed.

Another factor was a leaked audiotape in which, as Fox News’ Gregg Re reported, Cagle could be heard saying he “helped pass a ‘bad public-policy bill’ for political gain.” The tape focused attention on Cagle’s ties to the political establishment in Atlanta that, like the establishment Trump faces in Washington, is out of favor with many Republican voters.

The gubernatorial runoff race was not without its ups and downs, but things likely turned more on voters’ perceptions of the two candidates and which one would fight harder on behalf of their interests.

The campaign was also not without moments of levity, such as when disgraced GOP state Rep. Jason Spencer – who had already been defeated in his bid for renomination – appeared literally with his pants down on entertainer Sasha Baron Cohen’s new television program.

Spencer had endorsed Kemp. The Cagle campaign attempted without success to make an issue out of Spencer’s use of a racial slur against black people on Cohen’s TV show and his other shocking behavior, but the voters wouldn’t bite.

There were also two Democratic runoffs for congressional seats in the state. Lucy McBath defeated Kevin Abel in the 6th District, and Carolyn Bourdeaux defeated David Kim in the 7th District.

While Kemp walked away with the GOP gubernatorial nomination, President Trump came out a winner as well, showing that he has the political clout to move the electorate to his favored candidate. That must have been welcome news for the president.