The leaders of North and South Korea will hold a three-day summit beginning Tuesday in the North Korean capital of Pyongyang, accompanied by several hundred officials from their two governments – indicating significant progress may be made in efforts to gradually move toward denuclearization of the Korean Peninsula.

This is a move we should all welcome – and it could lead to a second summit between President Trump and North Korean dictator Kim Jong Un. An agreement coming out of that meeting between the U.S. and North Korean leaders could change history and lead to a Nobel Peace Prize for President Trump, an idea I suggested in an op-ed for Fox News last spring. Maybe Trump and Kim could even share the prestigious prize.

Importantly, President Trump will need to be careful to not let his enthusiasm for progress toward North Korean denuclearization get ahead of reality. Kim – and his father and grandfather who ruled before him – all have broken promises to move toward a peaceful path. 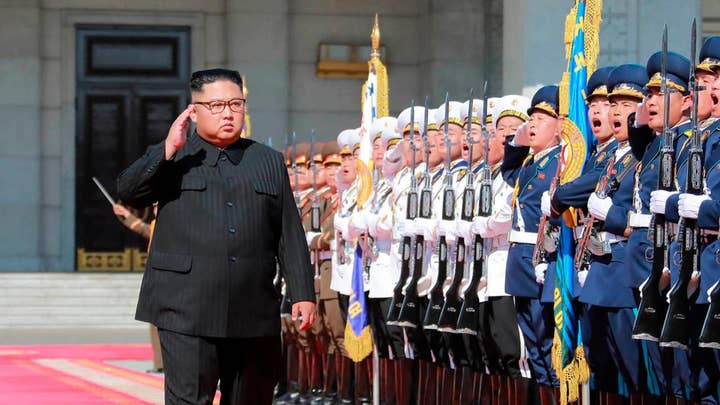 Consequently, any promises Kim makes must be verified, tested and checked over and over to ensure he is honest and that his intentions are clear. If he meets with Kim again, President Trump would be wise to be accompanied by U.S. experts on North Korea who can carefully scrutinize everything Kim says.

South Korean President Moon Jae-in recently sent a negotiating team to craft the agenda for his summit with Kim. South Korean officials described the meetings as positive and said they were told that Kim would like to denuclearize by the end of President Trump’s current term in office in January 2021.

Kim no doubt has a long list of big concessions he will want from the U.S. and South Korea in exchange for giving up his prized possessions – North Korea’s approximately 65 nuclear bombs. The North Korean leader won’t get rid of all his nukes at once – he wants concessions for every step he takes along the way. Expecting him to do otherwise is not realistic.

Kim could be in a mood for compromise because of President Trump’s show of strength in recently cancelling a proposed visit to the North by Secretary of State Mike Pompeo. Realizing that the détente he has set up is now at risk of falling apart, Kim may be trying to inject new energy into negotiations.

While the Singapore Summit on June 12 between Presidents Trump and Kim was successful in creating a pathway to diplomacy, there has been little progress since then on denuclearization that is truly concrete and irreversible.

But just a quick look at the evidence suggests that this month could be a historic time for not only inter-Korean relations, but the eventual signing of a peace declaration ending the Korean War once and for all. Fighting in that war was halted by an armistice in 1953, but a peace treaty has never been signed.

One indication of major progress from the Kim-Moon summit would be for Kim to agree to provide Seoul and Washington with a full accounting of the size of his nuclear warhead stockpile and missile arsenal in exchange for a peace treaty ending the Korea War. It seems clear President Trump would embrace such a proposal.

With talk just recently that Moon and Kim could jointly attend the U.N. General Assembly meeting later this month in New York City, the occasion would provide the perfect setting for them to be joined by President Trump to sign a peace treaty formally ending the war on their divided peninsula.

In just the past few weeks, Kim has toned down his anti-American rhetoric and sounded more willing to take serious steps toward denuclearization and a de-escalation of tensions with America and South Korea.

As first noted in an article in 38 North, scholar Robert Carlin points out that recent media reports out of the North say that Kim hopes “to completely remove the danger of armed conflict and horror of war from the Korean peninsula and turn it into the cradle of peace without nuclear weapons and free from nuclear threat.”

That’s a far cry from Kim’s past declarations that he would never give up his nuclear weapons – what the North has referred to as its “treasured sword” – and threating to fire missiles near Guam or perhaps even detonating a nuclear weapon in the atmosphere.

In another positive move, Kim cancelled his annual display of North Korea’s latest and greatest missiles at a military parade earlier this month. While many skeptics have said the move to keep intercontinental ballistic missiles out of the parade was no big deal, President Trump clearly appreciated it.

Kim was under pressure to display his weapons at a time when the North Korean economy is feeling the pinch of economic sanctions. With a gross domestic product the size of Vermont and a population that can’t even feed itself, Kim’s long-range missiles and nuclear weapons are the only things the so-called “hermit kingdom” can claim as national achievements.

Kim likely faced stiff resistance from his top military brass and inner circle to show off the missiles, but he decided to make a gesture of goodwill. Considering the occasion in question was the 70th anniversary of the founding of the North Korean state, such a gesture shouldn’t be casually dismissed.

On the U.S. side, President Trump may want to compromise with Kim to get something he could claim as a foreign policy triumph before the Nov. 6 midterm elections and at a time when Trump has faced criticism growing out of Bob Woodward’s new book, an anonymous op-ed in The New York Times by a senior official in his administration, and the continued Russia probe by Special Counsel Robert Mueller.

Also, with the President Trump getting ready to take on China – perhaps slapping Beijing with $200 billion in tariffs – Beijing will surely back off any assistance in the “maximum pressure” campaign of economic sanctions that Washington has waged against North Korea. Since China accounts for almost all of North Korea’s foreign trade, U.S. and international economic sanctions against the North are meaningless without Chinese cooperation.

And as Washington shifts its Asia policy more and more to take on a rising China – an infinitely bigger threat than North Korea – a deal on with Kim will look increasingly attractive to the Trump administration.

While we await the results of the Kim-Moon summit, the good news is that for once there are reasons to be optimistic about the possibility of denuclearization of the Korean Peninsula. Even Republican foreign policy hawk Sen. Lindsey Graham of South Carolina told Fox News recently that he is optimistic that a compromise with North Korea can be found.

I also find myself – despite my concerns about the speed at which North Korea is becoming a dangerous nuclear power – having more reasons to be hopeful that a peaceful solution is possible.

Who knows, maybe we will see President Trump getting the Nobel Peace Prize. And if he succeeds in getting North Korea to abandon its nuclear weapons he will surely deserve it.