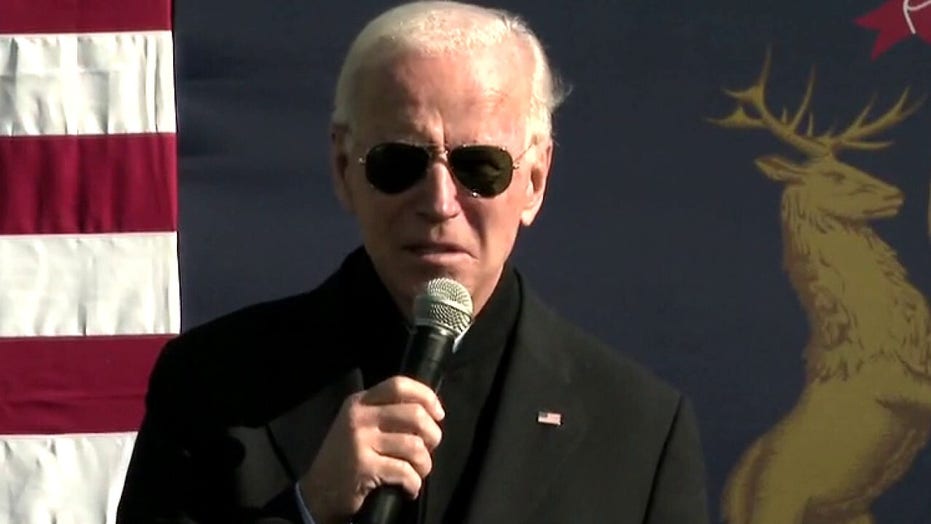 Biden and Obama make their first joint campaign appearance of the year in Michigan on Oct. 31, 2020.

The American people appear to have caught on to the conman in chief who occupies the Oval Office. President Trump is trailing Democratic presidential nominee Joe Biden in the polls because millions of Americans are tired of Trump’s lies, incompetence, ignorance and dismal record of failure upon failure — particularly regarding his response to the coronavirus pandemic.

More than 9 million Americans have been infected with the coronavirus and more than 229,000 have tragically died. No, Mr. President, we haven’t turned the corner on this virus. The pandemic is getting worse, and the White House has been absolutely nonresponsive.

And no, President Trump, hospitals aren’t at capacity simply because the American people have more access to testing. The truth is that our hospitals are filling up because more and more Americans are getting COVID-19, and as a result they are showing up at emergency rooms in droves.

We are not flattening curve on the pandemic, no matter how many times Trump claims that to be the case at his super-spreader rallies with thousands of unmasked supporters. COVID-19 is a clear and present danger and the American people are paying with their lives.

Already, more than 90 million Americans have cast ballots in the election that concludes Tuesday. Trump is responsible for the early voting, because his horrific mishandling of the coronavirus pandemic has convinced many of us that if we show up at the polls on Election Day we could risk contracting COVID-19.

It may take weeks for us to know the election results. That is because of both the heavy mail-in balloting and the multiple legal challenges Trump has mounted and is expected to mount to keep mail-in ballots from being counted.

Trump’s unwillingness to hear the voices of everyday Americans struggling with health deficiencies, unemployment and other economic woes is breathtaking. He continues his war on ObamaCare, and his administration will soon argue before the Supreme Court that the health care law should be thrown out — harming millions of Americans, especially those suffering with preexisting conditions.

I cast my vote for former Vice President Joe Biden with the acknowledgment that he is not the perfect candidate — nor does he claim to me.

Both Biden and Trump are older than the average American and have policy positions in their past that make them unpalatable to many in the American electorate. However, 2020 isn't actually about likeability. I voted for Biden and vice-presidential nominee Sen. Kamala Harris, D-Calif., because this election is about decency, civility, problem-solving, and a leader’s effectiveness and competence.  On all those marks, Biden has Trump beat by leaps and bounds.

The former vice president’s crystal-clear messaging and willingness to speak truthfully about the coronavirus and how to deal with it make him a natural choice for voters looking for commonsense solutions.

Biden accepts science, listens to experts and reads his briefings. Trump does none of these things, spouting one nonsensical claim after another based on misinformation.

Struggling American families are looking for leadership that will flatten the curve of COVID-19 infections, develop a national strategy, and bring some sanity to the White House. Trump has failed to provide it. Biden will be able to.

For the past seven months, educators, parents, and students alike have been living the COVID-19 reality that Trump and his White House have ignored. If you take a moment to listen to these long-suffering Americans, you would quickly find out that for them, we aren't turning the corner on COVID-19 — we are digging ourselves into a deeper ditch.

Whether it be the continually changing COVID-19 guidelines for returning to school, the haphazard re-openings and pandemic-induced closings, or the lack of a strategy around virtual learning, these often-ignored Americans live with COVID-19 as part of their daily reality.

As a nation, we need to deal with the facts: COVID-19 will be here for a while. It has had a negative impact on all of our lives. Teachers, parents, students, people who have lost their jobs and businesses, and millions of us mourning the unnecessary deaths of loved ones can’t ignore the pandemic just because Trump tells us we should.

COVID-19 has also laid bare the economic reality that is being faced by far too many Americans. Not only has this pandemic and Trump's mismanagement of it dismantled our economy — it has crippled the most vulnerable American families and the communities where they live and work.

Trump, a billionaire, is focused on the stock market. But only 55 percent of Americans are invested in the stock market. Many Americans are more focused on the supermarket and wondering how to afford groceries because they are living paycheck to paycheck — or no longer getting paychecks. They are struggling desperately to avoid both homelessness and hunger — as if they live in a Third World country and not the United States of America.

Because so many Americans still depend on unemployment insurance, food pantries and the help of friends and neighbors to survive, the lack of a real economic vision and fiscal stimulus from Washington is outrageous.

But Trump has given up on negotiating with Democrats to provide badly needed aid to American families, businesses, and state and local governments. He would rather spend his time holding super-spreader events that infect more Americans with COVID-19 and claim the pandemic is just about to end and a vaccine will be available “momentarily.”

Without a clear closing argument or a coherent strategy, Trump is losing this election and losing it badly. In 2016, he tapped into the frustrations and grievances of millions of unheard and forgotten Americans. But today, Trump's lack of empathy and sympathy, and his unwillingness to hear the American people's stories, have left him in a lurch.

Deafened by the cheers from his super-spreading campaign rallies, Trump is transfixed on the pre-COVID economy of yesterday, while most Americans are trying to figure out what they will do tomorrow.

Trump’s lack of concern and quickness to turn the page have opened the door for the naturally sympathetic Joe Biden to take center stage.

America is described by some as a land of milk and honey — rich with boundless opportunity. Others describe it as a bittersweet country trying to do the right thing in the face of inequity and imbalance. These two definitions characterize the state of this election and its potential outcome.

Truth be told, the results of the election will fall in between those two perspectives. I believe the race will be much closer than most pollsters and pundits have predicted. That’s why to determine the outcome of the election we must look no further than what’s happening to the American people and how ongoing developments affect their ballots. It’s not just about evaluating the candidates.

It takes little effort to look at Trump's record and assume that he will not be reelected. In addition to his dismal record or COVID-19 and the economy, he has supercharged racial hatred in this country by blowing far too many dog whistles and racial bullhorns to even count.

But sadly, Trump’s many failings and disgraceful behavior might not be enough to evict him from the White House. He continues to have a strong appeal to his base — witnesses the many people who continue turning out at his super-spreader rallies, endangering their lives and the lives of their loved ones and others they come in contact with.

The American people have been left to fend for themselves, with no leadership from Donald Trump and his White House. This should disgust all American voters and slingshot them to the polls. Millions of Americans are over Trump’s mismanagement and it’s time to let him know.

If you haven’t voted yet, I urge you to do so. Vote for Joe Biden — not because he is perfect, but because he is the most equipped to lead our nation during this turbulent time.

Richard Fowler currently serves as a contributor to FOX News (FNC), joining in September 2016. In his role, Fowler provides political and cultural analysis across FNC’s daytime and primetime programming as well as the network’s Sunday media analysis program MediaBuzz with Howard Kurtz. He also has appeared as a guest co-host on The Five (weekdays, 5-6 PM/ET).