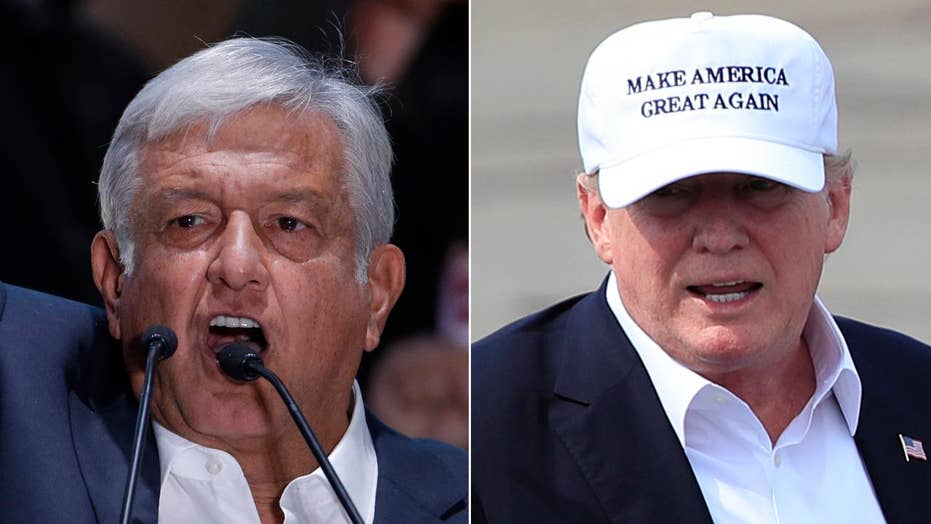 Andres Manuel Lopez Obrador, an outspoken critic of President Trump, sweeps to victory in Mexico; Dan Henniger, editorial page deputy editor at the Wall Street Journal and Fox News contributor, on what this means for key issues like trade and immigration.

When Mexican President-elect Andres Manuel Lopez Obrador takes office Dec. 1, President Trump will have the opportunity to improve relations with our southern neighbor and build his long-promised border security wall. He should take advantage of it.

As a candidate, President Trump pledged repeatedly to build the wall. But expecting Mexico to pay for the construction of the wall, as candidate Trump called for, was never a realistic option. On the other hand, paying Mexico to help the U.S. build the wall might conceivably gain Mexican support.

President Trump could require any increased foreign aid he gives to Mexico to go to border security, fighting drug cartels in Mexico, and buying American goods.

Lopez Obrador has said: “Soon, very soon, after the victory of our movement, we will defend migrants all over the American continent and the migrants of the world who, by necessity, must abandon their towns to find life in the United States; it’s a human right we will defend."

But Lopez Obrador has grand plans for expensive social programs to help the Mexican people. He needs lots of money to help pay for these plans. If he thought cooperating with President Trump on a border wall and immigration would get him some of that money, he might be willing to work with the U.S.

This grand plan to build a wall and take other immigration control measures with Mexican help, funded by the U.S., might never get off the ground. But it’s worth a try.

Lopez Obrador’s leftist past will make it especially challenging for him to get the resources he needs to fulfill his campaign promises, because international investors might flee Mexico, fearing the nation might follow the Venezuelan path to socialist ruin.

If President Trump and Lopez Obrador become friends, the U.S. president could vouch for Lopez Obrador’s good intentions towards businesses, to help Mexico attract foreign capital. A Trump promise to not impose tariffs on Mexico would further help the country get new business investments.

Normally, it would be politically perilous for a U.S. president to give huge sums to Mexico, and few Mexican leaders could survive being seen as helping enforce American immigration policy. But both President Trump and Lopez Obrador have successfully positioned themselves as strong nationalists willing to stand up to their neighbor – so both could likely win public support for the deal.

Lopez Obrador could justify the wall to his citizens by saying they need physical protection from U.S. drug buyers. Mexico’s drug cartels have been causing record-breaking violence in the country.

President Trump could shift from saying we need the wall to keep illegal Mexicans out to claiming that “good fences make good neighbors.”

As another incentive to Mexico, President Trump could offer Mexico a jobs program where the U.S. not only pays for the wall but also primarily hires Mexican citizens to do the construction. First dibs could go to Mexican immigrants illegally living in the U.S. who agree to move back home.

A Trump-Lopez Obrador deal could solve one of President Trump’s biggest political problems – the left’s accusations of racism against him. If Lopez Obrador supported Trump and his wall, it would defang Democratic charges that Trump is somehow motivated by anti-Latino animus.

President Trump and Lopez Obrador need to reach an understanding because of the harm they could do to each other. Trump could crush Mexico’s economy by restricting imports from the nation. Lopez Obrador could exploit Trump’s political weakness – an inability to deal with illegally immigrating minors – by flooding the U.S. southern border with child immigrants from throughout the Western Hemisphere.

The visuals of all these desperate children would energize the liberal media throughout Trump’s presidential re-election campaign.

This grand plan to build a wall and take other immigration control measures with Mexican help, funded by the U.S., might never get off the ground. But it’s worth a try. If it succeeds, it would be evidence that President Trump can be innovative and truly understands the art of the deal. It could be part of his lasting legacy.

James D. Miller is a professor of economics at Smith College and the host of the Future Strategist podcast. He is @JimDMiller on Twitter.