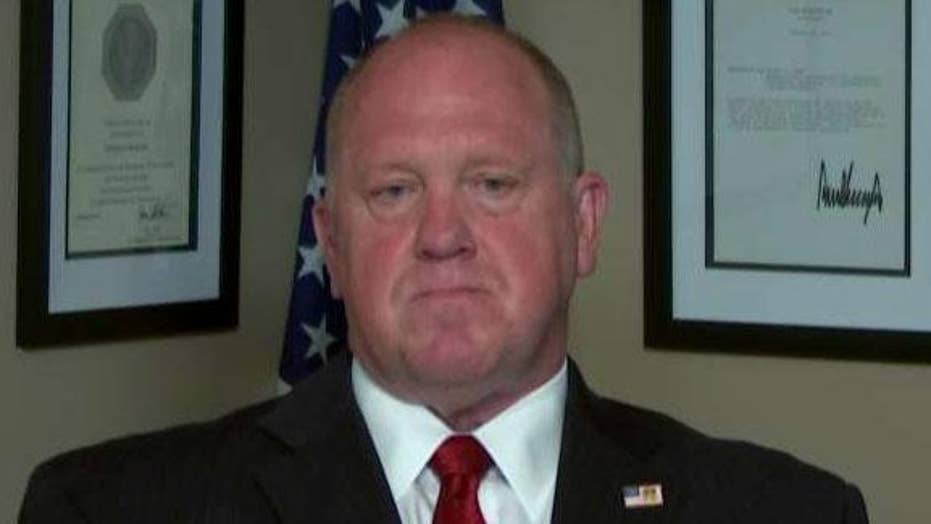 Tom Homan says the SCOTUS ruling is a huge win for the American people.

Friday’s Supreme Court decision allowing President Trump to transfer $2.5 billion of Defense Department funds to defend our southern border by building hundreds of miles of wall to replace existing fencing will protect the American people and our national sovereignty.

News stories are calling this a victory for the president, which it is. But far more importantly, the ruling that will allow Pentagon funding for border wall construction in Arizona, California and New Mexico is a victory for our country.

After Congress stubbornly refused to appropriate desperately needed funds to secure our border from increased illegal immigration, President Trump quite properly determined he had a responsibility to defend our nation. That meant he had to find an alternate way of funding a border barrier in strategic locations identified by the Border Patrol.

The president’s decision to defend our border with Defense Department funds makes sense and is clearly within his authority.

As someone who has spent most of my life enforcing immigration laws enacted by Congress and presidents of both parties, I know the Supreme Court’s 5-4 decision Friday is both important and correct. President Trump has not only a right but an obligation to act to resolve the humanitarian and national security crisis along our border with Mexico.

Historical data clearly shows that wherever border barriers have been installed, illegal immigration and illegal drug flows have decreased.

Border barriers are an effective tool. Even a young child understands that people can’t walk through walls or fences.

No one would claim that a border wall will reduce the flow of illegal immigrants and drugs to zero. But just because a measure doesn’t totally solve a problem doesn’t mean we should take no action.

Look at this analogy: Our nation, states and localities do a great deal to reduce the toll of deaths and injuries from traffic accidents. We set speed limits, design roads to minimize accidents, and require vehicles to have safety belts and meet other safety standards. Unfortunately, people still get killed and hurt in traffic accidents. But many more would lose their lives if we said there was no point in setting any safety standards because they couldn’t eliminate all deaths and injuries.

A border wall is one piece of the much-needed infrastructure that the men and women of the Border Patrol need to protect our nation. Together with the proper technology and assets to respond to intrusions, the wall will certainly reduce the illegal flow of people and drugs across o southern border.

It’s unbelievable that some of our Democratic elected lawmakers are saying they don’t want to do anything about lawbreakers when it comes to our immigration laws. These Democrats seem to be taking the attitude that we can all pick and choose which laws we want to obey and which we choose to ignore – like selecting what we want for lunch in a cafeteria.

Presidential candidate Donald Trump made a campaign promise that he would secure our border and enforce the laws of this country.  If you look at all the actions he has taken since he arrived in the Oval Office, any objective assessment would show that he has done more than any president in my lifetime to secure our border.

The president has taken a series of executive action to reduce illegal immigration.

President Trump has sent unprecedented resources from the Defense Department and the Department of Homeland Security to our southern border to respond to illegal immigration. He has declared a national emergency. He has proposed an immigration overhaul plan. And he is fighting hard on behalf of the American people to get the needed funding to build border barriers where they are needed.

In addition, the president has reached historic agreements with Mexico and Guatemala in an effort to secure our border and save lives. No other president has been able to reach such agreements.

Democrats are wrong when they say a border barrier is Trump’s vanity wall. This is America’s wall and it will provide protection for America’s national security.

No one called these security projects vanity walls when Presidents George H.W. Bush, Bill Clinton, George W. Bush and Barack Obama approved them. And both Democratic and Republican members of Congress agreed to fund the barriers under these four presidents.

Let’s not forget, how many times President Trump has been right on the issue of border security and how many times those in Congress have been wrong.

Many in the media and some in Congress said the president was wrong to say there were caravans of illegal immigrants headed to the U.S. border, but Trump was proven right.

The president’s critics said there was no illegal immigration crisis and that it was all manufactured. But here again, Trump was proven right.

The sad fact is that the governments of Guatemala and Mexico have done more to secure their southern borders than the Democratic leadership in the U.S. Congress has done to secure ours.

What’s the answer of Democrats to the illegal immigration crisis? Well, if you listen to those running for the Democratic presidential nomination and others in the Democratic Party, their ideas simply will not work.

What are the Democratic “solutions” to end the illegal immigration crisis?

It’s unbelievable that some of our Democratic elected lawmakers are saying they don’t want to do anything about lawbreakers when it comes to our immigration laws. These Democrats seem to be taking the attitude that we can all pick and choose which laws we want to obey and which we choose to ignore – like selecting what we want for lunch in a cafeteria.

If this absurd concept spread, laws would become meaningless and no one would be safe from criminals.

Yet Democrats in Congress and elsewhere say that illegal immigrants who have been ordered deported by a judge don’t have to obey that order. Mayors of sanctuary cities tell illegal immigrants that they are above the law as long as they stay in the city limits.

That means more people will put themselves in the hands of criminal smuggling cartels and tragedy will follow – more women will be sexually assaulted and more children will die.

The cartels get richer and our nation becomes less safe because half of the Border Patrol agents are tied up dealing with the flood of illegal immigrants, making it possible for more criminals and illegal drugs to enter our country.

And no, I am not saying that all illegal immigrants are dangerous criminals. But for the minority who are, getting into the U.S. is easier when half of the Border Patrol tired up dealing with migrants who have been apprehended or turned themselves in to seek asylum.

The bottom line is that the costly and complex problem of illegal immigration won’t be eliminated by construction of a border wall. But the Supreme Court decision Friday is an important step in the right direction that will make illegal immigration less of a problem than it is today.

We should all be grateful that President Trump’s ability to protect our great nation has been strengthened by the high court decision. He has shown clearly that he is determined to carry out his responsibility to enforce our laws and keep us secure, and the American people should be grateful for that.