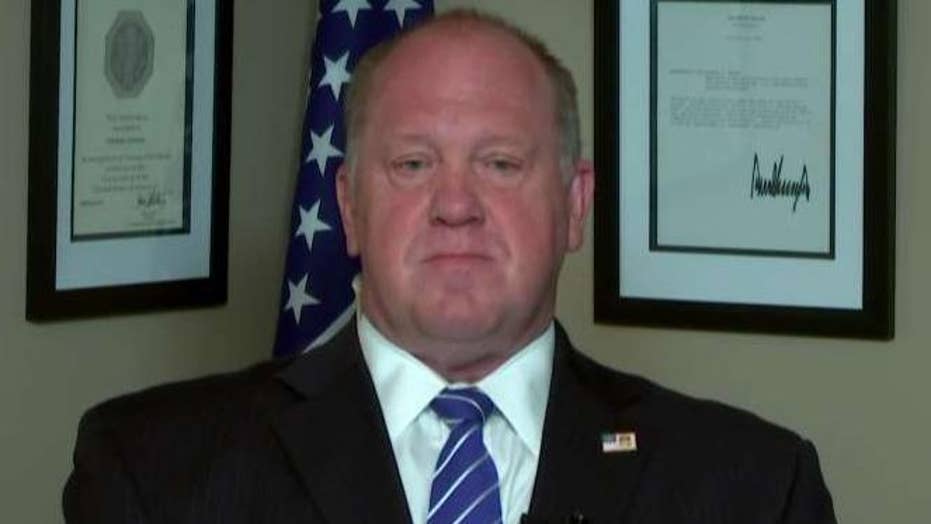 What is going on in this country right now, especially on Capitol Hill, is nothing short of deceitful behavior which intentionally distorts the truth in order to win a political battle.

I saw it firsthand when I testified on Capitol Hill this past Friday, in front of the House Committee on Oversight and Reform.  Aside from the six minutes I was given to read my opening statement, there was an attempt by most  Democrats on that committee to silence me.

The issues surrounding zero tolerance and the conditions of confinement at Border Patrol stations is an important one and it is vital that the American people know the facts. But every time one of the witnesses or members of Congress said something that was downright wrong – a lie, an intentional mis-truth – and I attempted to speak up and correct the record, I was refused many times the opportunity to speak.

The hearing was nothing but political theater to misinform the American people. It was politics at its worse.

Toward the second half of the hearing, I finally decided that I was not going to be silenced any longer. If they didn’t want to hear what I had to say, then I was going to interject, interrupt and speak to the American people.  I refuse to be bullied, and I will not be silenced in my support of the Border Patrol and ICE or in support of the truth.

Further, as ICE prepared to conduct a nationwide operation, Democratic leaders such as Nancy Pelosi held a press conference to instruct those who have violated our nation’s laws on how they can evade federal law enforcement.  How they can evade the law.  How what ICE is doing is un-American and they need to resist.

Are you kidding me?

The Speaker of the House, a lawmaker for decades, is instructing those who have violated the laws that Congress enacted – who were ordered removed from the country by a federal judge after due process – to evade arrest?  Since when is that appropriate?  What other laws can we ignore?  What other law enforcement officers should we evade?  Can I ignore the tax law and not pay my taxes?

This behavior by Democratic politicians both on the Hill and in our cities and states will result in several things:

First, it puts the public in more danger.

And it will lead to unrest and violence and death.

It’s already happened. On Saturday, an armed man, after attending a protest at an ICE contract facility in Washington state, tried to burn down the facility. Do you think he’d heard all the words of these politicians? Saying resist ICE, ICE is bad, ICE are Nazis, ICE runs concentration camps? Not only did this man lose his life when police shot him, he tried to burn down a facility where there were American civilian workers and hundreds of illegal immigrants from Mexico, Guatemala, El Salvador, Honduras and many other countries.

When politicians incite discourse and hate, this is what happens.

Here are some facts that these Democrats don’t want you to know:

For all their pleas about locking up innocent people trying to make a better life for themselves, here is the truth: 72 percent of everyone in ICE custody are mandatorily detained by law, most for criminal activity.  Congress has said that they must be detained – not by choice, but by law. All of these politicians who keep saying they want to do away with detention are saying this in spite of the fact it is their laws, passed by Congress, that say these people MUST be detained because of danger or other circumstances.

Another fact is this: nearly 8.5 of every 10 people arrested by ICE are either convicted criminals or are facing pending criminal charges.  Therefore, these facilities are helping the U.S. government and ICE to keep our communities safe.

Another fact: For all the politicians’ talk about “for profit for prisons” – these contract facilities, like the one in Colorado, have doctors, nurses, dentists, psychologists, recreation, law libraries, three nutritious meals a day, all dictated by the detention standards that were created not just by ICE but by professional outside partners.  All of these standards are inspected and overseen by several different investigative agencies that perform unannounced audits and inspections, including the Office of Detention Oversight, Office of Professional Responsibility, the DHS Inspector General, and more.

Do you think the person who attempted to burn that facility down and kill hundreds of people ever heard any of these facts?

Not if he was listening to the Democrats who want to abolish ICE and all detention.

Facts. Something that has escaped the breath of the Democratic leadership and the media that want open borders.

Who pays the price for all these lies? The American people – who will be less safe if ICE isn’t allowed to do their jobs to arrest, detain and remove those that the law says MUST be removed.