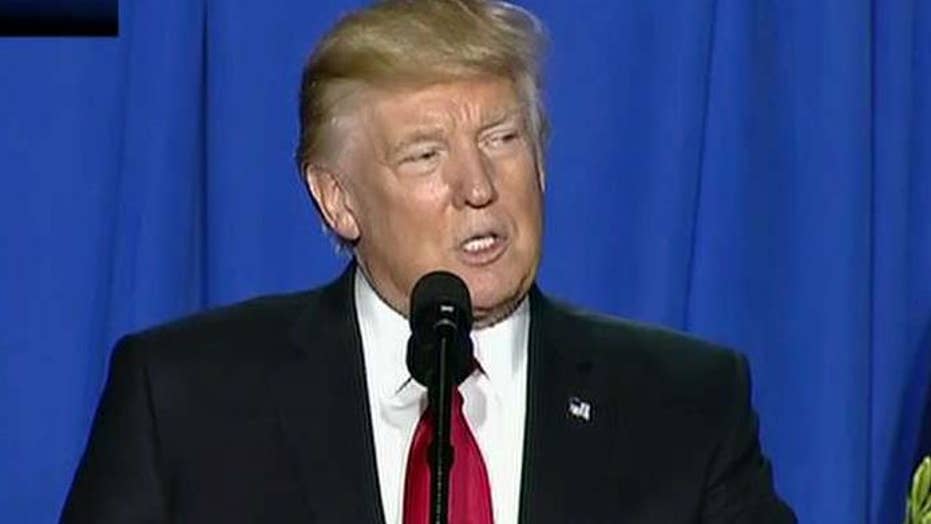 President Trump: US gets back control of its borders

Donald Trump walked into the Oval Office on the first Monday of his presidency less than 100 hours ago, and what has ensued is a frenzy of focused activity aimed at national and job security.

Through a series of executive actions, the president has been checking off his campaign promises like a Friday to-do list before a three-day weekend.

In his first 100 hours, Trump has shown that the previous administration’s choice to create law using the president’s pen and phone can and will be eviscerated one signature at a time.

But what is most significant is the political deftness Trump and his team are showing. The picture of the new president sitting with some of his most ardent opponents from organized labor has got to send shivers down the spines of Democratic Party insiders.

Open Secrets reports that private sector unions contributed more than $25 million in political donations in 2016, with an overwhelming majority going to Democrats. But the real political power of labor unions within the Democratic Party is their established political network, which provides instant trained grassroots to benefit candidates they support.

To date, the top-down rule of labor organizations has assured the Democratic Party the benefits of the money and muscle that these groups can provide, while increasingly losing their voters’ support.

In the first 100 hours of the Trump administration, Democratic Party hegemony through that top-down rule has been shaken, as many of the leaders who visited the White House received access they never had to Barack Obama, who was pivoting toward a loose coalition of millennials, Silicon Valley elites and identity politics-based voters, and away from the blue-collar voters who had been a mainstay of decades of electoral success.

The meeting with the labor leaders preceded Trump’s signature on a memorandum withdrawing the United States’ signature from the crown jewel of Obama’s trade policy, the Trans-Pacific Partnership — giving the union leaders a big win. Less than two hours later, Trump was signing another memorandum undoing the Democrat policy of administratively killing the job-creating Keystone XL pipeline, a high priority of many of the union leaders who were in the Oval Office.

International Brotherhood of Teamsters General President James Hoffa Jr. applauded President Trump, crowing in victory: “This is a major step toward putting more Americans to work, building the infrastructure that we need and creating economic prosperity.”

In his book, "The Art of the Deal,"Trump listed his No. 1 attribute for success: "I like thinking big. I always have. To me it's very simple: if you're going to be thinking anyway, you might as well think big."

In the first five days of his presidency, Trump has thought big, setting in motion a chain of events that could alter the electoral map for a generation. In an adroit political act, albeit one I disagree with, Trump signed a separate pipeline memorandum requiring that American steel be used in building the pipelines.

Through this bold move, he signaled to everyone that he is a different kind of president. Unbound by conventional philosophical constraints, he has unleashed projects that supporters of limited government and a free market believe are necessary to achieve North American energy independence and the economic benefits that entails, while putting a decidedly anti-free-market pill in the package to force-feed private-sector money into taking a small step in rebuilding the American steel and coal industries.

Anyone surprised by this approach should remember another of Trump’s principles from his book: “Deals work best when each side gets something it wants from the other.”

In the first 100 hours, we have seen this at work, as “populist” Trump and “cut regulations” Trump have come together, forcing everyone to think in a new way, beyond the set piece arguments that have calcified American politics.

Just as Candidate Trump dismantled conventional wisdom by ripping through the Democrats’ vaunted Blue Wall of Rust Belt states, President Trump seems intent on moving forward with policies he perceives will help rebuild our nation’s manufacturing base. However, unlike those Republicans in the 1950s who declared that whatever was good for General Motors was good for America, Trump’s cry seems to be, whatever is good for the American worker who makes, builds and extracts wealth, is good for the country and the world.

In the first 100 hours of Trump, everything has changed. Rather than him adapting to D.C., it appears D.C. will be forced to adapt to him. The swamp is in trouble.