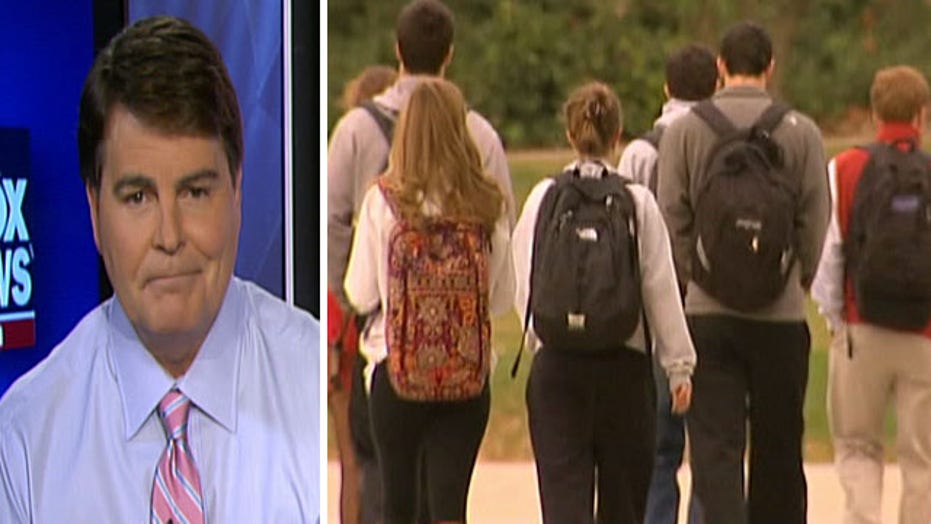 Jarrett: Surviving college, as a parent

Gregg Jarrett's advice on how to survive the process of sending your child to college.

“What do your parents know, about surviving?” asks Lemony Snicket, the fictitious children’s author.

Well, this is a story of survival. As a parent. I survived the trauma and drama of sending a child to college. Like a Snicket tale, it is a series of unfortunate (and stressful) events…with a happy ending.

In fact, I did better than merely survive. I recently returned from my inaugural “parents weekend” brimming with pride. Somehow, in the brief course of her first two months of college, my oldest daughter had blossomed. No longer beset by the angst of uncertainty common among newly minted freshmen, she was comfortable and confident. And happier than I have ever seen her. How could this be the same frightened, bewildered girl I hugged goodbye just a few fortnights ago?

But the story is more complicated than that. The road to college has been an exhausting odyssey. I highly recommend it. Yes, there have been obstacles, challenges, and inordinate stress.

Emotionally, it has been turbulent. Tears were shed. At times we felt overwhelmed and intimidated. But in the end, witnessing your child go off to college to excel as an academic and flourish as a person is all the reward a parent could ever dream.

Things have certainly changed in the more than forty years since I was applying to colleges. Back then, my discerning selection process was akin to tossing darts at a board. I did not bother to visit the campus of my eventual choice until after I was accepted. Even then, I went on my own and simply walked around. No parents, no tour, no informational session.

I was impressed. But then, I had no baseline of experience with which to compare. Thus, my approach to picking a college was neither comprehensive nor astute. Maybe even cavalier. But it worked out.

Fast forward four decades and the sometimes torturous search for the perfect college for my first born daughter. My wife and I spent more than a year taking Grace to visit 20 colleges and universities in 8 states, plus Washington, D.C.

That’s right, twenty campus tours and nearly as many informational sessions. I readily admit we fell victim to a terminal case of overkill. So that part I do not recommend. Try to be judicious. Set limits.

There are a myriad of resources available to make the search and selection less onerous. Just about every college has its own website with virtual tours and encyclopedic explanations to help navigate the maze of academic offerings.

There are guidebooks which give insight into campus life and identify strengths versus weaknesses of each institution.

We networked among friends and sought the advice of counselors to compile a realistic list encompassing a range of colleges based on our daughter’s academic credentials (so-called “reach, match, and safety” schools).

I confess, my wife was far more savvy and involved than I. But as parents, we took pains to play a supporting role. Our daughter assumed the lead, which made her more invested in her decision of where to apply.

The perils and pressures of getting admitted is a different tribulation. Again, how times have changed. In my day, if you could sign your name and lick the stamp, you were in. Okay, it’s a slight exaggeration. But I can say with certainty that I would never be accepted to my college today. Or any top educational institution, for that matter. Their current standards are much higher than my record reflected back then. Now, the admissions office would take one look at my application and burst into laughter. “This guy thinks he can attend this school?” After the hilarity died down, a rejection letter would be mailed forthwith.

Today, it is more complicated and competitive. Higher test scores, better grades, special skills, talents and leadership qualities are the mandatory ingredients of college acceptance. One mediocre high school grade or a substandard semester can make the difference between a thin or thick envelope in the mailbox. It strikes me as severe and unfair, but this seems to be the reality. I don’t envy today’s teenagers, but such are the vicissitudes of fortune that go with life.

The worst part of the college process are all the unknowns and immeasurables. Not to mention the suspense. My daughter’s mantra became, “what if I don’t get into any schools, Dad?” My constant reassurance did little to assuage her doubts.

The interminable wait whipsawed our emotions. Nervousness evolved into anxiety. Tension turned to near panic. This was so alien to me. As a high school student, I never lost a night’s sleep over the prospect of college acceptance. Now, I was losing sleep as a parent.

Relief eventually found us in the form of a letter of acceptance to Grace from her university of choice. But my other worries, which I kept private, began to manifest.

What if she doesn’t like the school or make friends? What if she is unhappy and wants to come home? Of course, millions of parents have wrestled with the same or similar concerns. All I can say, is that these things seem to have a way of working themselves out.

As I look back on it all, I am reminded of a Grateful Dead lyric: what a long strange trip it’s been. And I wouldn’t have missed it for all the gold. But truly, the hardest part is what happens at the very end. Taking your child to college and saying goodbye. Letting go, amid a flood of memories. Of kindergarten and play-dates, piano lessons and glasses, tennis tournaments, exams, parties and proms.

Sitting in a hotel room the night before our farewell, I suddenly realized I needed to say something important to Grace. Something meaningful. Sage advice perhaps, from father to daughter. But I couldn’t do it just standing there with her the next day surrounded by all the other parents and their progeny. It had to be personal and heartfelt.

So, I grabbed some blank hotel stationary and composed a handwritten letter. I slipped it to her as we said goodbye, trying my best to hold back the tears.

As you commence your college journey, I know it will be filled with joy, exciting experiences and wonderful, lifelong memories. These four years are to be treasured as you make new friends and advance your knowledge of the world. That is not to say there won't be the occasional moment of fear or trepidation in facing new challenges. This is to be expected. It is natural and quite normal to feel apprehensive over the unfamiliar and unknown. But try not to let it intimidate you or deter you from your worthy goals. Always move forward in the direction of your dreams. Remember, the true measure of a person is not how they react to success, but how they handle the inevitable adversity that accompanies life --with courage and grace. Do your best in all things, but be sure to allow yourself a good dose of fun in the many adventures to come. Please know that I will always be here to support you in all matters, however large or small. I am your biggest fan! No father could be prouder of his daughter than I am of you. I love you with all my heart,