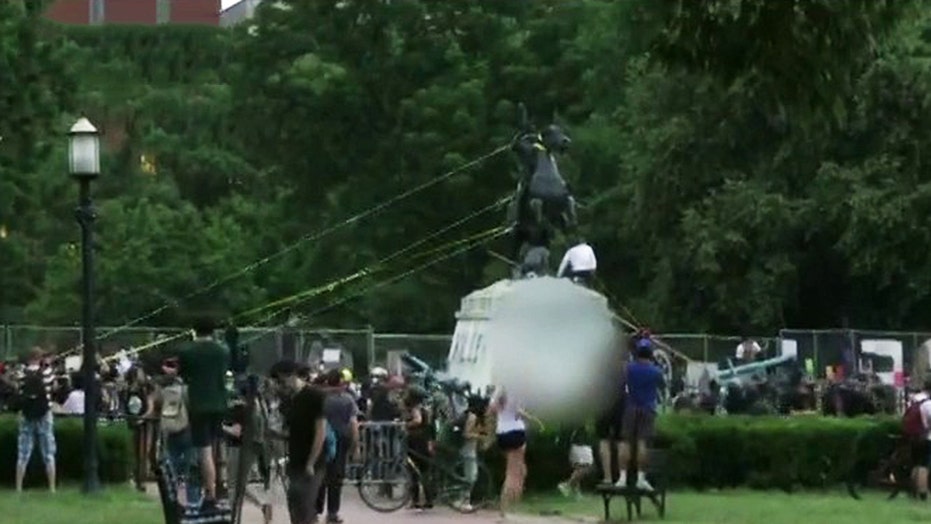 Trump authorizes arrests of anyone trying to vandalize or destroy monuments

Fox News contributor Katie Pavlich reacts to the growing unrest after protesters fail to topple a statue of Andrew Jackson outside the White House.

Hands off the statues!

Statuephobes have screamed for years: “Knock them off their pedestals. Put them in museums!”

Why, then, would Manhattan’s American Museum of Natural History remove from its entrance an 80-year-old statue of President Theodore Roosevelt? It’s already at a museum!

This dishonor is unworthy of the Republican who invited Tuskegee Institute founder and “Up from Slavery" author Booker T. Washington to dine at the White House. This made Washington the executive mansion’s first black dinner guest.

Also, TR launched the U.S. Forest Service, among other conservationist initiatives. This normally earns applause, not cancellation, at a natural-history museum.

What’s racist about this statue? A virile Roosevelt is on horseback, proudly and freely flanked by an equally muscular Native American and a robust black man. Roosevelt is not whipping them. Nor is he auctioning them off as property (unlikely, since slavery ended when TR was 6). So, what the hell is the problem? Those who call this statue racist should check themselves for infantilizing the Indian and the black man therein.

Like a decent museum artifact, visitors can learn from this piece, ponder its historical context, and read placards that explain the objet de art’s inherent and comparative significance. Rather than yank down this beautiful creation, why not treat it and other controversial works this way: Attach one or more plaques to explain the good, the bad and the ugly about the subject at hand.

Such enlightenment, rather than id-driven destruction, would resemble the “outdated attitudes” warnings that Sky TV and other media companies now use to describe old films. Better this than exiling to studio vaults such classics as “Gone with the Wind,” “Lawrence of Arabia” and “Trading Places” (!).

Beyond Roosevelt, defacement and destruction lately have befallen statues of Thomas Jefferson and George Washington — slaveholders but also, respectively, the polymath who drafted the Declaration of Independence, the first and clearest expression of America’s founding ideals, and the general whose anti-colonial Revolutionaries booted the British.

These nihilists dozed through history class. Had Grant lost, slavery might have dehumanized blacks for decades longer. As president, Grant sent federal troops into South Carolina to hunt and neutralize Ku Klux Klansman. Today, the Left says thank you by crashing Grant to the ground. Criminals in Charlotte graffitied Communist slogans and a hammer and sickle on a tribute saluting 500 local World War II heroes “who made the supreme sacrifice that you might live in liberty, freedom and peace.”

There is neither rhyme nor reason to the War on Statues. Alleged adults panic, pander and surrender to vicious mobs, then do their erasist bidding. Elsewhere, testosterone-fueled hooligans perpetrate mindless, destructive acts of toxic masculinity.

How long before today’s “untouchable” statues plunge onto sidewalks? Crazed crowds someday might decide that President Franklin Delano Roosevelt’s defeat of Nazi Germany and Imperial Japan means nothing, compared to his internment camps for some 120,000 U.S. citizens and legal residents of Japanese descent. Before President Harry Truman integrated the U.S. Armed Forces in July 1948, he decisively ended World War II in August 1945. This prevented 10 million deaths, Baylor University professor Philip Jenkins estimates, had that conflict bled into 1946. However, Truman did this by dropping atomic bombs on Hiroshima and Nagasaki, killing between 130,000 and 225,000 Japanese.

Are President John F. Kennedy and Dr. Martin Luther King Jr. safe? For all of their good, they were not Earth’s most faithful husbands. This might prove too much for tomorrow’s feminists.

See ya, JFK and MLK.

By this standard, statues of President Bill Clinton better be bolted down tightly now.

And what about Planned Parenthood founder Margaret Sanger? As a eugenicist, she wanted to whiten the planet by reducing black births.

And is even Jesus Christ safe from these hoodlums?

“I think the statues of the white European they claim is Jesus should also come down. They are a form of white supremacy,” early Black Lives Matter activist Shaun King declared yesterday via Twitter. “All murals and stained glass windows of white Jesus, and his European mother, and their white friends should also come down. They are a gross form [sic] white supremacy. Created as tools of oppression. Racist propaganda. They should all come down.”

King also is a writer-in-residence with the Fair Punishment Project at Harvard Law School. This morning he said he had received 20 death threats since addressing Jesus. “It pretty much proves my point,” King wrote. “Your religion is actually whiteness with a Christian patina.”

Demolishing supposedly racist statues undermines the very cause that these vandals and weak-kneed liberals claim to espouse. If America really is institutionally racist, why remove reminders of this wretched condition?

Rather than junk Washington and Jefferson, shouldn’t BLM and Antifa point to them and say, “See? There’s another homage to the slave owners who started this country!” These unthinking radicals are obliterating powerful evidence of exactly what they want to prove.

Today’s iconoclasm does nothing for black advancement beyond virtue signaling and chest-thumping. In 2016, five Baltimore high schools had zero math-proficient students (not one!), according to Maryland’s state tests. In August 2017, the city removed four Confederate-era monuments. That fall, new tests found that the number of local high schools with zero students who could compute at grade level reached 13. Too bad statue phobia cannot repair intellectually abusive government schools. 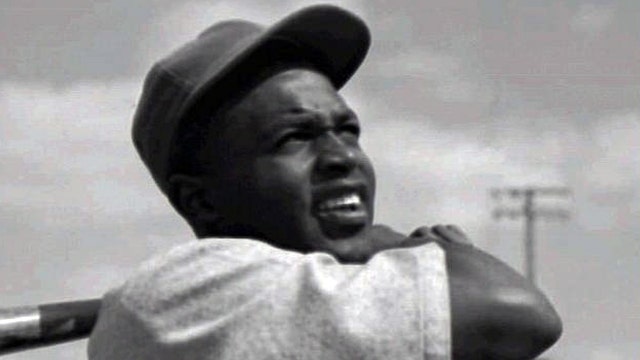 Every human being worth preserving in bronze or marble blends good and bad, since human beings are complex, imperfect sinners. The only way to present perfection on pedestals would be to sweep away today’s unfavored men and women and replace them with seamless spheres, cones and cylinders. Rendered with geometric exactitude, they should stir zero controversy, debate or thought. Perhaps that finally would satisfy America’s thoughtless new mob rulers.