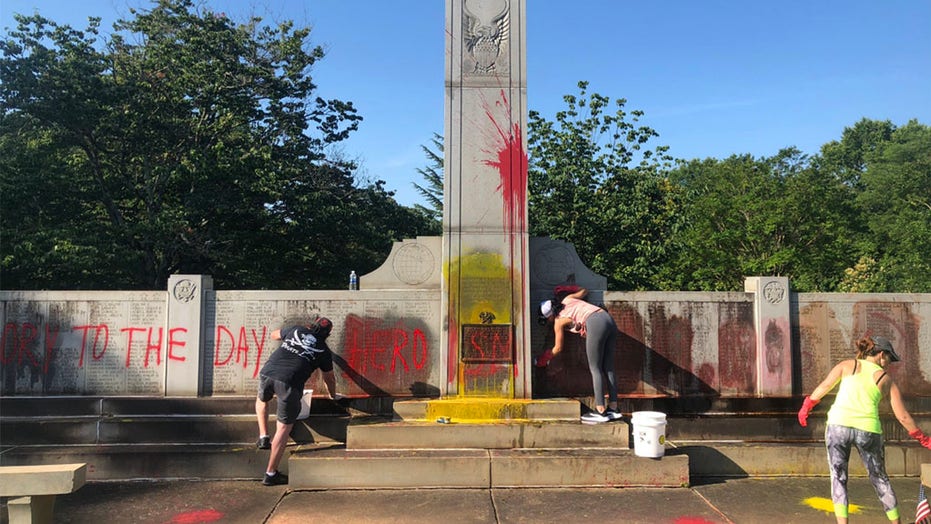 A World War II memorial in North Carolina’s largest city was reportedly defaced over the weekend with a hammer and sickle.

The 20-foot-tall memorial, located at Evergreen Cemetery in Charlotte, contains the names of more than 500 county residents who died fighting in WWII, WBTV reported.

Local residents help clean up a World War II monument in Charlotte that had been defaced.  (Fox46 Charlotte)

Somewhere between Sunday evening and Monday morning, it was defaced with references to communism, including a hammer and sickle and the words: “Glory to the day of heroism June 19, 1986.”

The phrase is a reference to a prison massacre in Peru, in which some 224 people were killed by the military after a series of riots.

A portion of the WWII monument that read, “Dedicated to the memory of the Mecklenburg heroes of World War II who made the supreme sacrifice that you might live in liberty, freedom and peace,” was also covered in yellow paint.

Later Monday, a group of people were spotted scrubbing off the paint. U.S. Air Force veteran Wayne White told Fox 17 he rounded up some friends to help clean the monument after seeing images of the defacing on social media.

Wayne told the station that the names on the memorial “are veterans and deserve the honor, respect, and dignity.”

The monument’s defacing comes as other historic monuments and statutes have become the targets of anger and vandalism during nationwide protests in the wake of George Floyd’s death in police custody late last month.