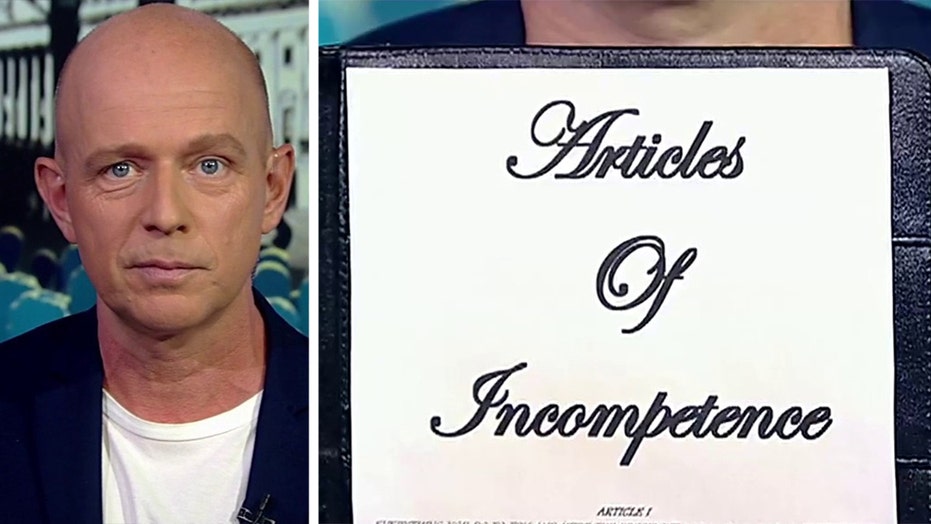 Steve Hilton presents the 'Articles of Incompetence' against Nancy Pelosi

Nancy Pelosi has spent three years blocking President Trump's actions to help the average American. Trump's high approval rating is proof he represents the will of the people Pelosi wants to dismiss.

The Senate may have voted down those articles of impeachment against President Trump last week, but that's not the end of the story.

First up, ladies and gentlemen, let me present some new articles to House Speaker Nancy Pelosi. Here they are - the articles of incompetence.

Article one: Everything you do to try and hurt the president you hate blows up in your face. Just as the Senate shut down your impeachment farce, President Trump's approval ratings hit a record high. And it's obvious why.

Second article of incompetence: Iowa. Your caucus fiasco showed - and I think this calls for a classic British expression at this point: You people couldn't organize a piss-off in a brewery.

Aside from the dark money and the Clinton connections behind the whole debacle, the serious point, as The Wall Street Journal brilliantly put it, is this: "The party that promises technocratic management of American health care, energy and finance proved less able to tally votes even than the ancient Athenians."

Article three: You can't control your temper. For three years, we've put up with your endless lectures about civility and upholding democratic norms, and then the State of the Union, you put on an embarrassing, petulant stunt.

Article four: Even when they're trying to deceive the voters, the Democrats are incompetent. Elizabeth Warren never stops raising the alarm about climate change and raging about the billionaires. Put those things together and what do you get? Private jets, gas-guzzling, plutocrat playthings.

You'd never catch the people's green champion on one of those, right? So okay, just there she is, Elizabeth Warren. She's on a private jet. She suddenly realizes she's being filmed. So she literally tries to hide behind an aide. These lefties are so incompetent, they can't even cover up their own hypocrisy.

So, on behalf of a nation crying with laughter at the Democrats, with great sadness -- and of course prayerfulness --  I sign these four articles of incompetence. There they are. Nancy, I can send you a pen if you like.

Sure, you now have Sens. Grassley, Johnson and others pushing for a review of Hunter Biden's overseas dealings. But where have they been? We've been laying out the Biden corruption for nearly a year.

What the hell do we have to do to get the Biden corruption investigated?

Hunter was hired by a Ukraine energy company while his dad was directing taxpayer dollars towards Ukraine's energy sector. You can see he's guilty from the way Joe Biden reacts when challenged on it.

Savannah Guthrie, "Today" show co-host: Do you think it was wrong for him to take that position, knowing that it was really because that company wanted access to you?

Joe Biden, 2020 presidential candidate and former vice president: Well, that's not true. You're saying things you do not know what you're talking about. No one said that. Who said that? Who said that?

Guthrie: Don't you think that it's just one of those things where people think, well, that seems kind of sleazy. Why would he have that job if not for who his father was?

Guthrie: I guess the question I'm kind of asking is, was it right?

Biden: Its appearance. Yes. Well, he said he regretted having done it. [He can] speak for himself. He is a grown man.

He said "speak for himself." Yes, exactly. In the witness chair. Hunter Biden, tell us your expertise in Ukraine, your expertise in energy in 2014 when you were hired by Burisma. When you were wandering around a crack den in Los Angeles in 2016 while on the Burisma board, was that on behalf of the company?

How about Joe, can you speak for yourself, too? How much U.S. taxpayer money went to Burisma while your son was on board and you sent billions of dollars to Ukraine's energy industry? You said you didn't know about your son's ties to Burisma. But last year, he said he told you. So who's lying? You or your son?

And while we're talking about your Ukraine corruption, how about your China corruption? So, #JoeChina, what exactly did Hunter do in Beijing in December 2013 when you took him there on Air Force Two? Was it a coincidence that less than two weeks later, his company signed an exclusive and unprecedented billion-dollar deal with a state-owned Bank of China? Any connection to the fact that you went soft on China just at that moment, and still to this day say there is no competition?

It doesn't stop with Hunter, does it, Joe? Corruption is a whole family business for the Bidens, as Peter Schweizer documents in his new book, "Profiles in Corruption."

Your son-in-law, Howard Krein, was the chief medical officer at a tiny company called StartUp Health that went on to receive unprecedented access and support from the Obama administration. 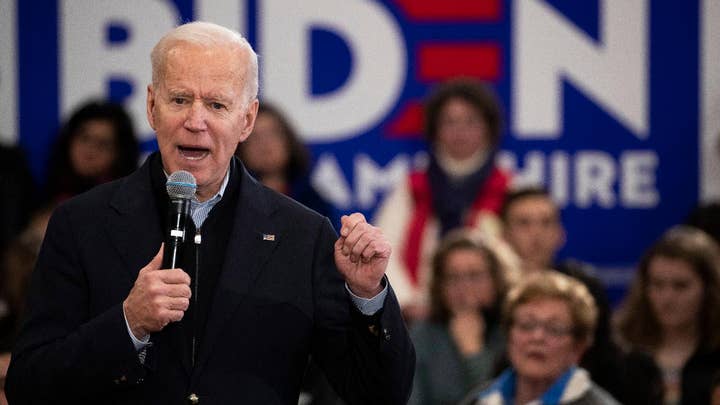 Your brother, James, with no experience in construction, was hired as an executive vice president at a construction company, the HillStone Group, less than three weeks after the firm's president visited the White House. In the following months, HillStone was awarded tens of millions of dollars' worth of government contracts.

Your brother, Frank, with no experience in real estate, or Costa Rica, got lucrative real estate deals in Costa Rica, just months after you happened to visit the country's vice president. And here is another Costa Rica coincidence for Frank Biden: heir government did a deal with Frank's energy company. Of course, he had no experience in energy, either, on a solar project that received a U.S. taxpayer-backed $6.5 million loan.

Oh, wait - there's a Frank Biden-Caribbean coincidence, too. In June 2014, as vice president, you, Joe Biden, announced the launch of a new program to boost financing for Caribbean energy projects. Later on, the Obama administration announced a $47.5 million loan to build a 20-megawatt solar facility in Jamaica.

Guess who ended up signing a deal to build a 20-megawatt solar facility in Jamaica? The man himself, Frank Biden. It's like Frank is the new Hunter.

And it looks like you, Joe Biden, and the whole corrupt snouts in the trough Biden family -- Hunter, Frank, James, Howard - for decades, you've grifted taxpayers while pretending to be just a regular blue-collar family. What a joke.

So here is the question: What the hell do we have to do to get the Biden corruption investigated? For three years, President Trump has his administration blocked and probed and hounded, but nothing on the other side. That is not fair. That is not justice. That is not the rule of law, but the law of the "swamp" - and the king of the swamp is Joe Biden.

So as impeachment comes to an end, let the investigation of Biden begin.

Adapted from Steve Hilton's monologue from "The Next Revolution" on Feb. 9, 2020.