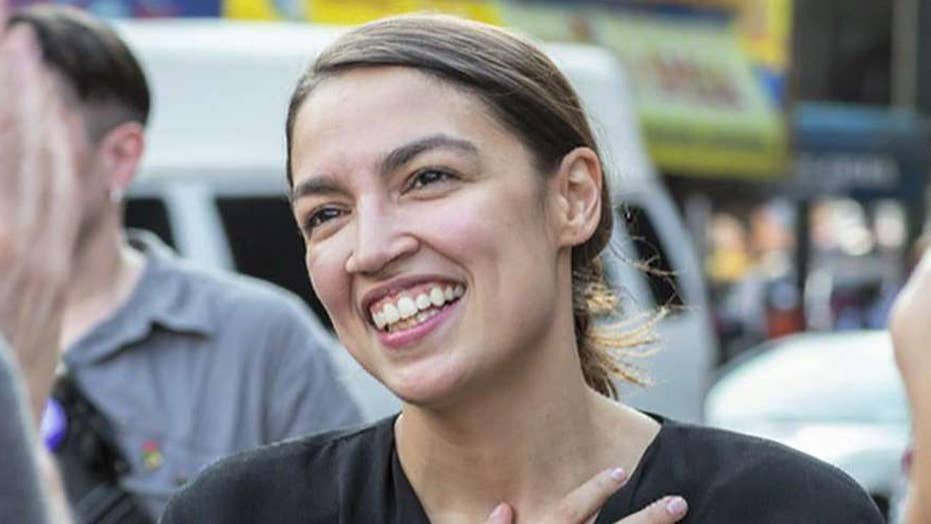 When Mayor Bill de Blasio picked Bernie Sanders to swear him in for his second term, it was a sign, much like a groundhog signaling six more weeks of winter, that the heart of the Democrat Party was changing — even if Bernie himself still refuses to acknowledge that he belongs to it.

And while Sanders-endorsed candidates have floundered nationally, they got a big win last night when 28-year-old Democratic Socialist Alexandria Ocasio-Cortez breezed past establishment figurehead Joe Crowley in the primary for the relatively safe 14th District.

Nancy Pelosi tried to wave away the obvious Tea Party parallels by saying the 14th is simply a “very progressive district … They made a choice in one district. Let’s not get yourself carried away.” But it’s becoming clearer and clearer that Democrats’ days of flirting with the more radical wing of their party are over. They’re now in a committed relationship with each other, the hammer entwined with the sickle.

Party bigwigs should’ve seen it coming. In the 2016 presidential nomination race, Sanders was supposed to be Hillary Clinton’s tomato can. Instead, he gave her a serious run for her money, such that the party had to lean on the scales in Hillary’s favor just to make sure she limped across the finish line.

In Ocasio-Cortez, comrades everywhere finally have their sleeker, new model, and can finally start to haul the old jalopy off to the junkyard. Take a bow Berniecrats, you finally have someone to rally behind that doesn’t have to be carbon dated.

After Clinton lost to Donald Trump, Democratic candidates started sounding a lot more like Sanders — Medicare-for-all and the like. Ocasio-Cortez, herself a former community organizer for the Sanders campaign, has followed suit. Her official platform included a right to housing, a universal-jobs guarantee and Medicare-for-all.

In Ocasio-Cortez, comrades everywhere finally have their sleeker, new model, and can finally start to haul the old jalopy off to the junkyard. Take a bow Berniecrats, you finally have someone to rally behind that doesn’t have to be carbon dated.

Ocasio-Cortez says her first goal, if elected to the House (an almost sure thing), is to introduce legislation abolishing ICE, a bridge too far for even Bernie, but a romanticized goal among the online far-left monster given life by Dr. Bernie Frankenstein. Minority Leader Chuck Schumer has stated that he simply wants to reform ICE. But as national media line up behind the attractive and articulate Ocasio-Cortez, and her social-media following explodes as it has done since her victory, tempering the radical Occupy remnants is going to become more difficult.

She has yet to offer any solutions on how to pay for her fairytale platform, of course, beyond the standard manifesto answer of taxing the rich. Ocasio-Cortez also supports impeaching President Trump, which many Democrats quietly support but candidates aren’t supposed to say out loud, as the midterm electorate might be wary of spending the next two years mired in such shenanigans.

Her radicalized anti-Israel stance became apparent in a tweet blaming Israel for the recent violence in Gaza perpetuated by Hamas: “This is a massacre. I hope my peers have the moral courage to call it such. No state or entity is absolved of mass shootings of protesters. There is no justification. Palestinian people deserve basic human dignity, as anyone else. Democrats can’t be silent about this anymore.”

Along with her tweets, a former New York City Council candidate whose platform was to “defeat the greedy Jewish landlords” both volunteered for her campaign and attended her election-night victory party.

This will surely give Schumer and the leadership heartburn, but like it or not, these positions aren’t outliers, and Ocasio-Cortez’s ascension will almost surely make other Democrats more confident in stating them plainly. Democrats always seem stumped when asked, “What’s the difference between a Democrat and a socialist?” Thanks to Alexandria Ocasio-Cortez, that question just got much more difficult to answer.

As the Democrats reject the moderate centrist voters that could be key to winning back support in the middle of the country, there’s a hard lesson that Nancy Pelosi and Chuck Schumer seem yet to accept from watching the Tea Party create a wave of grassroots momentum that toppled party leaders who got in its way: It’s already Ocasio-Cortez’s party.