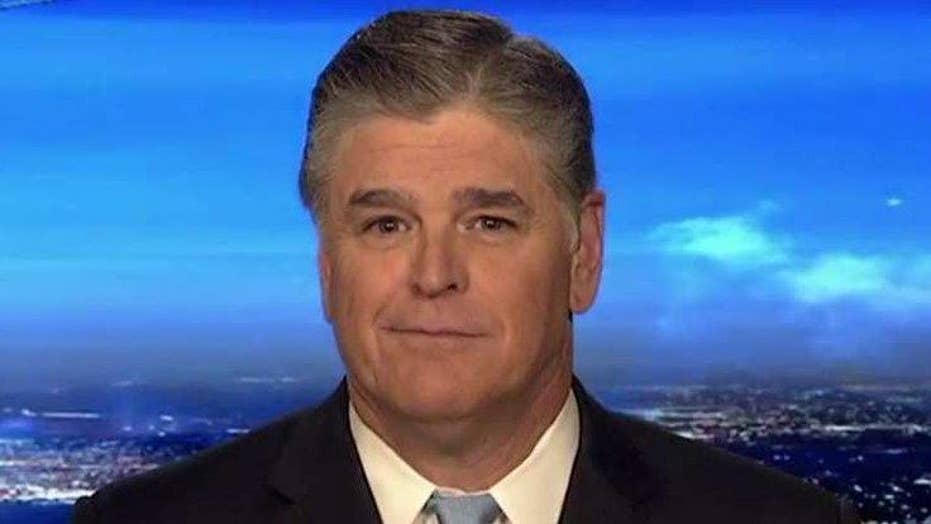 Hannity: Trump is fighting back against the propaganda media

The media utterly despises the president

While members of the mainstream media gathered in Washington for the White House Correspondents' Dinner, President Trump went to the people.

There were no hors d’oeuvres or cocktails at Trump’s rally in Harrisburg, Pa., where the president rallied his supporters and mocked the media – even as they patted themselves on the back and made lame jokes about him.

He held a big rally in Pennsylvania where he actually mocked the event and slammed some of these biased journalists who attended the fancy event 120 miles south, patting themselves on the back.

“A large group of Hollywood actors and Washington media are consoling each other in a hotel ballroom in our nation's capital right now,” Trump told the crowd. “They are gathered together for the White House Correspondents' Dinner without the president. And I cannot possibly be more thrilled than to be more than 100 miles away from Washington's swamp spending my evening with all of you and with a much, much larger crowd and much better people.”

Then, this zinger on the heels of the media’s critical evaluations of his first 100 days in office:

“If the media's job is to be honest and tell the truth, then I think we would all agree the media deserves a very, very big fat failing grade!” he said.

President Trump skipped the Correspondents' Dinner for good reason. They don't like him, and they showed it once again by lashing out at the commander-in-chief.

“We cannot ignore the rhetoric that has been employed by the president about who we are and what we do., said Jeff Mason, a Reuters White House correspondent and president of the organization. “We are not fake news. We are not failing news organizations. And we are not the enemy of the American people.”

Alleged comedian Hasan Minhaj gave a cringe-worthy performance that could only draw laughs from a press that hates Trump.

“We’ve got to address the elephant that's not in the room,” he said. “The leader of our country is not here, and that's because he lives in Moscow. It is a very long flight.

“There also was another elephant in the room, but Donald Trump, Jr. shot it and cut off his tail.”

Given the smears and so-called jokes, why exactly was Trump supposed to be at this dinner? The elitist, alt-left media was insulted that our president didn’t come to endure their abuse.

“Donald Trump couldn't take the heat, so he got out of the kitchen,” said one commentator. “He avoided getting roasted at the White House Correspondents' Dinner last night.”

Trump instead met with the American people who elected him, and CNN’s Paul Begala thinks he knows why.

“He needs this affirmation from his base because he's a moral midget and he is a deeply insecure person,” Begala said.

The mainstream media utterly despises President Trump. It's dripping from every word they say. They can't stand him or anybody else, like me, who dares agree with him and supports him.

But President Trump is not going to sit back and let these attacks go unchallenged. He's going to call out the media's extreme bias, including right to their faces. That’s just what he did to CBC News’ John Dickerson Sunday.

“You know, it's very funny when the fake media goes out -- you know, which we call the mainstream media, which sometimes, I must say, is you,” Trump said on “Face the Nation.” “But when the --

“You mean me, personally or –“ Dickerson protested.

Now that’s the kind of humor the rest of America can laugh at.