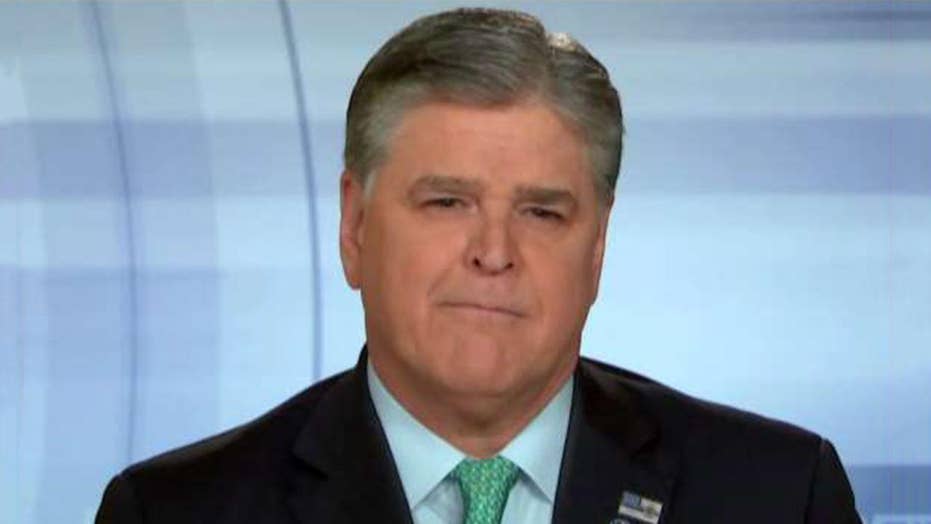 Hannity: America's borders are not safe and secure

Democrats continue to fight against funding the border wall despite Trump having the option to build his wall without congressional approval by declaring a national emergency.

On Tuesday night, President Trump will deliver a primetime address to all Americans, speaking about the crisis at our southern border. As we speak, a partial government shutdown is still in effect as Democrats bury their heads in the sand, close their eyes and pretend that America's borders are totally safe and secure.

They are not. In fact, Democrats are adamantly refusing to give border patrol agents the tools they desperately need and are asking for. And that is a strategic wall on the southern border. But now, even one top Democrat is admitting that President Trump does, in fact, have the power to build a wall without any congressional approval whatsoever.

"There's a provision in law that says the president can declare an emergency," said U.S. Rep. Adam Smith, D-Wash., in an interview on ABC News. "It's been done a number of times. But primarily, it's been done to build facilities in Afghanistan and Iraq. In this case, I think the president would be wide open to a court challenge saying, 'Where is the emergency?'"

Where is the emergency? We will answer that question. Pay attention to the following statistics, that, of course, the hate-Trump media, hate-Trump Democrats, are not telling you, that they're ignoring.

And the crisis goes much, much deeper. In towns and cities all across the country, we know about the opioid crisis, 300 Americans are killed every single week from heroin; 90 percent of that heroin is flooding across our southern border. That death toll, by the way, is equal to -- think about this -- the number of American troops killed every week in Vietnam during the year 1968. That was the war's deadliest year.

And over a 10-year period, the total Americans killed from illegal drugs coming across the southern border will be nearly three times higher than the total number of U.S. troops killed in Vietnam. There is your crisis, by any definition.

For us and most Americans, this is not a political game. We are seeing this is as about life and death. This is about innocent, brave, law-abiding Americans and legal immigrants literally dying because our borders are not secure.

But don't expect to see this on any other network. Of course, Donald Trump wants something, and they are just against it. Instead of reporting facts and truths, they seem content with just trashing Trump voters, blaming us for seeing the truth. Over on fake news CNN, commentator Rick Wilson first trashed Trump supporters, suggesting that we didn't have teeth. Now, he's saying we are not sophisticated enough; we're not smart enough to understand the issue involving border security.

And while fake news CNN insults our intelligence, conspiracy-TV, MSNBC, are referring to Americans - we the people - as cowards. Remember last week, when I was talking about how we have the hate-Trump media? And I told you about the information crisis? Personal attacks will never stop this show from reporting truths.

For us and most Americans, this is not a political game. We are seeing this is as about life and death. This is about innocent, brave, law-abiding Americans and legal immigrants literally dying because our borders are not secure.

Now, we know the story of Officer Ronil Singh. He was gunned down by an illegal immigrant just after Christmas. He was just put to rest this weekend. His 5-month-old son will never know his father. That's life and death.

And the person responsible for that heinous attack had a criminal track record. He should have been turned over to ICE. He should have been deported. But in California, they have sanctuary cities. The whole state is a sanctuary state, and those policies prevented that from happening. Government policies are now literally aiding and abetting lawbreaking and paving the way for future crimes. Why do you think the government would act and aid and abet criminals?

And like every other Democrat, you have the now-former governor of California, Jerry Brown, burying his head in the sand. But really, he ought to be taking responsibility. Sanctuary states literally prevent criminals that would normally have been handed over to ICE, from being being detained. It makes it illegal. That means they go free. What happened to Office Singh is all too common an occurrence.

Now, have you heard the name of Pierce Corcoran? On December 29, he was killed by a suspected illegal immigrant driving without a license, without insurance and on the wrong side of the highway. Pierce was only 22 years old.

The American people and the public need to start asking some really important, tough questions. How many of our fellow citizens have been murdered because of unsecured borders? Now, if that's not a national emergency, I don't know how we would ever define one.

Adapted from Sean Hannity's monologue from "Hannity" on January 7, 2019.


Sean Hannity currently serves as host of FOX News Channel’s (FNC) Hannity (weekdays 9-10PM/ET). He joined the network in 1996 and is based in New York. Click here for more information on Sean Hannity.