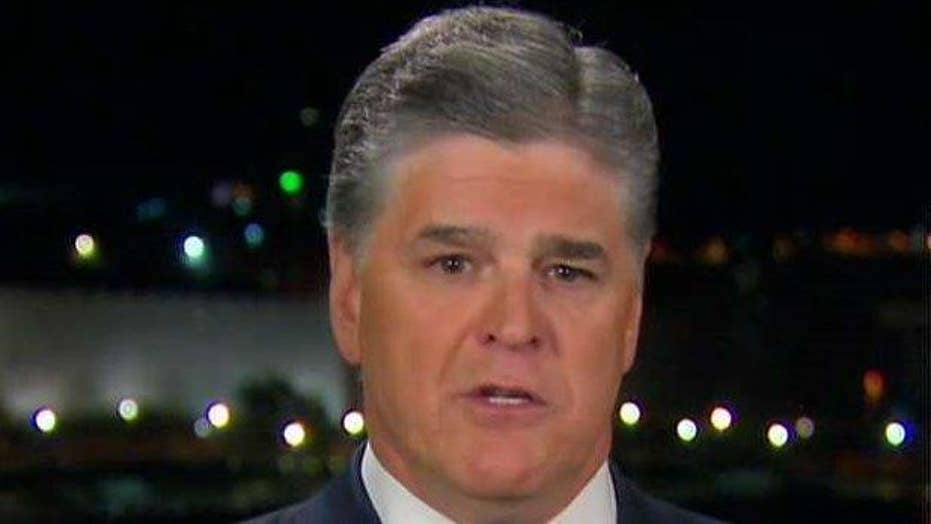 Hannity: America is leading from the front again

President Trump is sending a signal to the world that the United States of America is back, and that going forward, we will be leading from the front.

The commander-in-chief’s message that he will not be repeating the mistakes of his predecessors should not be lost on North Korea and Iran. The Hermit Kingdom, which this week threatened a "super-mighty preemptive strike" that will reduce America's military to ashes, is facing new pressure from President Trump.  And Tehran, the world’s No. 1 state sponsor of terror, is learning it is no longer dealing with a solicitous Obama administration that gave it a flawed and lucrative nuclear agreement.

These rogue regimes must never be allowed to develop or acquire nuclear weapons.  Allowing them to do so would put tens of millions of lives in immediate danger. North Korea routinely threatens South Korea and America with nuclear attacks. The Iranian government repeatedly calls for the destruction of America and Israel.

President Trump is forced to face all of these threats after years of the timid and naive appeasement policies of Bill Clinton and Barack Obama. For example, back in the 1990s, the Clinton administration struck a deal with the North Koreans, giving them $4 billion in energy aid in exchange for what they said was a promise that Pyongyang would eventually end their nuclear program.

“This is a good deal for the United States,” Clinton crowed on Oct. 21, 1994. “North Korea will freeze and then dismantle its nuclear program. South Korea and our other allies will be better protected. The entire world will be safer as we slow the spread of nuclear weapons.”

Obviously, this deal was completely flawed. It didn't work, as evidenced by the situation we now find ourselves in.

Then you have Barack Obama. Now, instead of learning from Clinton's massive mistake, he secretly brokered a deal with Iran that gave it $150 billion while still allowing them to spin the centrifuges that could weaponized nuclear material.

“Today, the United States, together with our allies and partners, has reached a historic understanding with Iran, which if fully implemented, will prevent it from obtaining a nuclear weapon,” Obama said in April of 2015.

Sort of like when Obama said his “red line” would stop Assad from ever using chemical weapons. Didn't work.

Secretary of State Rex Tillerson is now making it clear that Iran nuclear deal does nothing to stop Iran from ever developing a nuclear weapon. And with Tehran also testing ballistic missiles which could one day potentially carry a nuclear warhead, maybe even to the continental United States, you can bet the Trump administration won’t sit on its hands.

President Trump understands that when dealing with countries like North Korea and Iran, you've got to speak from a position of strength. Any time weakness is shown, they will exploit it to their own advantage.

If America wants an example of why it must lead from the front to combat these many threats, all one has to do is look toward Israel. The Jewish state shares borders with Lebanon, which is the home of the terrorist group Hezbollah, and Syria, which is engaged in a brutal civil war and where ISIS is headquartered.

Unlike America, Israel is not protected by thousands of miles of oceans. It is, instead, surrounded by enemies and complete chaos. Israel can’t afford to sit back and let its enemies have their way. And neither can President Trump’s America.