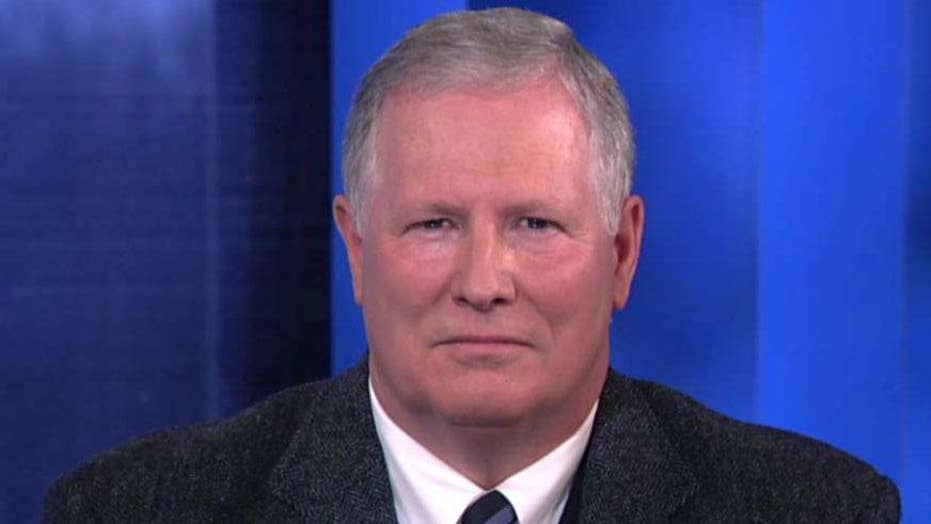 US withdraws from INF arms treaty with Russia

The Heritage Foundation senior fellow Peter Brookes weighs in on the president’s decision to withdraw from the INF arms treaty with Russia.

Pity Vladimir Putin. The Russian president’s deep anger at America and NATO is eating him up.

“The unilateral withdrawal of the U.S.A. from the INF (Intermediate-Range Nuclear Forces) Treaty is the most urgent and most discussed issue in Russian-American relations,” Putin said
Wednesday in his annual address to Russia’s Federal Assembly in Moscow.

Actually, the U.S. is leaving the bilateral arms control treaty because Russia won’t comply with the pact after years of testing violations centered on the 9M729 Novator missile.

“Our American colleagues have already tried to gain absolute military superiority with their global missile defense project,” Putin claimed. “They need to stop deluding themselves.”

But in reality, Putin is the delusional one – and he’s about to pay a big price for his country’s violations of the INF Treaty.


Flouting the INF Treaty violations and accelerating new weapons pretty much proves to the world that Putin is not cozy with Trump.

By violating the treaty and bragging about Russia’s aggressive new nuclear weapons
programs, Putin has given the U.S. and other NATO nations all the more reason to continue
economic sanctions imposed on Russia after it seized Crimea from Ukraine in 2014.

Putin has also endangered the future arms control that he says he wants. And all this for a missile with little military value.

Here’s the story of how Putin botched it.

President Reagan and Soviet leader Mikhail Gorbachev signed the INF Treaty in 1987. The pact was a compromise on arms control – Reagan wanted more – but it was a sign Gorbachev was sincere about reform. The Berlin Wall crumbled two years later and the old Soviet Union expired in 1991.

For a long time the signing of the INF Treaty stood as a golden moment when the dangers
of nuclear war receded. It was always a strange little treaty, but there was no mistaking the good will between Reagan and Gorbachev that resulted in the deal.

Then came Putin. He jumped from head of the spy service to the presidency of Russia to replace Boris Yeltsin. All Putin could see was the success and expansion of NATO and how far Russia had fallen from its days as the dominant power ruling the Union of Soviet Socialist Republics.

What provoked Putin most was U.S. missile defenses in his former Eastern bloc neighborhood.

Many NATO allies like Poland and Romania – once part of the Soviet-aligned Warsaw Pact – fall within the potential threat rings of Iran’s missiles. To that end, the U.S. began preparations to put missile detection radars into those two nations.

President George W. Bush withdrew from the Anti-Ballistic Missile Defense Treaty in 2004, in
part to deploy the Alaska interceptors that now guard the U.S. against North Korean missiles.

Putin lost it. He felt Russia was being encircled and contained.

So Russia juiced up an old missile and tested it with different, forbidden launchers. Putin did this quietly at first. President Obama noticed, and sent a stern letter in July 2014. The State Department again reported Russia’s breach of the INF Treaty in 2016.

Putin could get back in compliance with the treaty, but he doesn’t care. In fact, Russia is publishing pictures of its violations.

Putin’s simmering rage came out in his interview with Chris Wallace of Fox News in
Helsinki last year.

Putin ranted about betrayal and Russian troops marching out of Germany. The Russian president called U.S. missile defense systems “an immediate threat for our national security” and said his offensive weapons like the 9M729 Novator demonstrated that “we do have means to overcome the system.”

Good thing Putin is so pleased, because he loses a lot over Russia’s INF Treaty violations. For example, Putin is blowing any chance to get sanctions lifted on his country, attract investment and grow Russia’s economy.

Canada’s economy was bigger than Russia’s in 2017.

And on top of this, Russia is forging ahead as a commercial space launch power and aspires to threaten U.S. satellites on orbit.

With so many NATO members, Russia could never build enough missiles to take out all  potential airbases in the alliance.

Nor will Russia splinter NATO. The NATO defense ministers acknowledged the Russian treaty violations in December 2018.

Could it be that Putin wants to negotiate arms control with President Trump? Hints abound.

“It's just a negotiating item,” Putin said of the 9M729 last summer.

Russian banker Sergei Dubinin told Russian TV that an arms race is too expensive and could “cut us to pieces.”

“I will repeat that we are ready to engage in disarmament talks,” Putin said Wednesday.

Under that theory, the push to build more weapons is all about posture. Russia says it will deploy an autonomous underwater nuclear weapon this spring. Next come the hypersonic glide vehicles.

But botching the INF Treaty makes it hard for the U.S. to begin any negotiation. It also puts the New START Treaty renewal in 2021 at risk. That agreements limits the number of nuclear warheads, intercontinental ballistic missiles and heavy bombers the U.S. and Russia can deploy.

The final irony? Flouting the INF Treaty violations and accelerating new weapons pretty much proves to the world that Putin is not cozy with Trump.