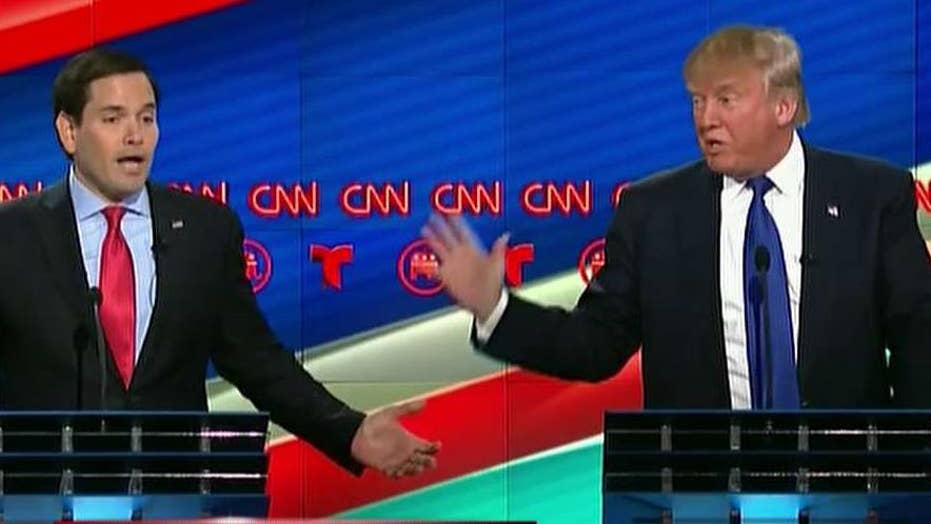 But was it effective? Reaction from Fox News contributor Charles Krauthammer

Some credit Aesop and his “Fox and the Lion” fable with first coining the phrase: “familiarity breeds contempt.”

I’m guessing you didn’t know that they held Republican presidential debates back in Ancient Greece.

A better Aesop fable in honor of Thursday night’s gathering in Houston, the tenth such GOP debate dating back to August?

It’s not “The Trumpeter Taken Captive.” If you tuned in to Thursday night’s debate hoping to see Donald Trump get his comeuppance: close, but not quite.

A better choice: “The Frightened Hares,” given the Republican establishment’s growing panic over the very real prospect of Trump actually winning the party’s nomination.

Did Trump Lose Ground? In a word: no.

Let me amend that: not with the people who believe Trump’s word is gospel – and the other candidates are Judases.

From the time he first latched on to illegal immigration and changed the dynamics of this race, it’s been clear that Trump knows how to speak to the fed-up side of the GOP electorate – more so than any other candidate still alive in the race.

The base-thumping approach was on full display in Houston. Trump took swipes at debate moderators (“I don’t believe anything Telemundo says” … “Very few people listen to your [show]”, he told talk radio’s Hugh Hewitt). Trump promised to add 10 feet to his border wall when told former Mexican President Vicente Fox said his country wouldn’t pay for it. He said he’s trim back government (no more Common Core) and crack down on fraud and waste. Trump generally stood his ground and pushed back when pushed by the moderators or attacked by his fellow debaters – and that was often.

The establishment hates the man’s style and antics, but the one-third-plus of the primary electorate that’s propelled Trump to the front of the multi-candidate pack – and won’t be leaving him anytime soon – adores the show. Which is why Trump likely will fare well on Super Tuesday, despite spending a great deal of time on the defensive and on the bad side of some pretty nasty put-downs.

Rubio Going After Trump. I was in Washington, D.C., earlier this week, listening to well-heeled Republicans carp that none of the candidates had torn into Trump. Which is kind of ironic, given that there’s nothing stopping individuals of means from doing the job (look no further than the Ricketts family of Chicago Cubs’ fame).

Rubio must have heard the griping, as he went right after Trump on the get-go. It began with allegations of Trump hiring foreign workers for his Palm Beach estate. After that: construction labor forces, Trump-signature products manufactured overseas, the lawsuit over the entity formerly known as Trump University. And on it went, throughout the night.

Rubio’s use of “Now he’s repeating himself”, after having the same words drilled into him in New Hampshire by New Jersey Gov. Chris Christie: the best sound bite of the evening.

This tactic will get Rubio a lot of air time between now and Super Tuesday. It’s also a second-guesser’s delight, as the cling-free Trump has been the Teflon Don of this field.

On Bruising – And Not Much Cruz-ing. “Consistent. Conservative. Trusted.” That's the Texas senator’s campaign slogan.

But on Thursday night, Cruz seemed consistently missing from the action. Part of it had to do with Rubio and Trump noisily locking horns. But having to ask Wolf Blitzer for a chance to weigh in on Obamacare? It seemed . . . well, kind of weak for a debate champ on his home Texas turf.

Cruz did have a strong moment when given the chance to talk about the Supreme Court – not a surprise, as that’s the constitutionalist’s sweet spot. But it wasn’t until 90 minutes into the debate that he really got into it with Trump over taxes and who’s better qualified to question Hillary Clinton’s ethics come the fall.

If Thursday night was closing the deal in Tuesday’s Texas primary, Cruz failed at the task.

What About Kasich and Carson? In-A-Gadda-Da-Vida, one of the great rock anthems of the 1960’s, runs slightly over 17 minutes. That’s about the same stretches of silence from Dr. Ben Carson and Ohio Gov. John Kasich.

To be fair, both gentlemen brought this on themselves – just as they have in previous debates.

Kasich has fashioned himself as the take-the-upper-road guy in the GOP field – he won’t butt in on any crosstalk.

Carson decided months ago that he’d speak only when spoken to.  Yes, the retired neurosurgeon had a valid complaint when he pointed out to Hewitt that he was left out of the tax-reform discussion. And he scored the other big sound bite of the night, underscoring the fact that he was going unnoticed amidst the food fight: “Can someone attack me, please?”

But that’s been Carson’s stage problem all along: he refuses to accept that debating is not a passive undertaking — sometimes the gifted hands have to do some shoving.

Presidential campaigns and their debates are a lot like criminal trials – long, drawn-out proceedings, trying to keep order in the court, a little perjury tossed in here and there, and way too many lawyers offering way too much in the way of tortured logic.

At this point, with only two scheduled GOP debates remaining (March 3 in Michigan; March 10 in Florida), the Republican field should be approaching its closing arguments.

Instead, what went down in Houston felt more like jury selection for the non-Trump candidates as they continue search for a sympathetic jury of their peers (ok, maybe I need to stop watching “The People vs. O.J.”).

The 150-minute debate in Houston underscored how the situation is driving mainstream Republicans nuts. Trump gets attacked all night long – in the process, giving Hillary Clinton’s oppo team writer’s cramp as it races to jot down the many vulnerabilities – yet he seems impervious to attacks personal, professional and policy-wise.

And no one can figure how to get it off the freeway.