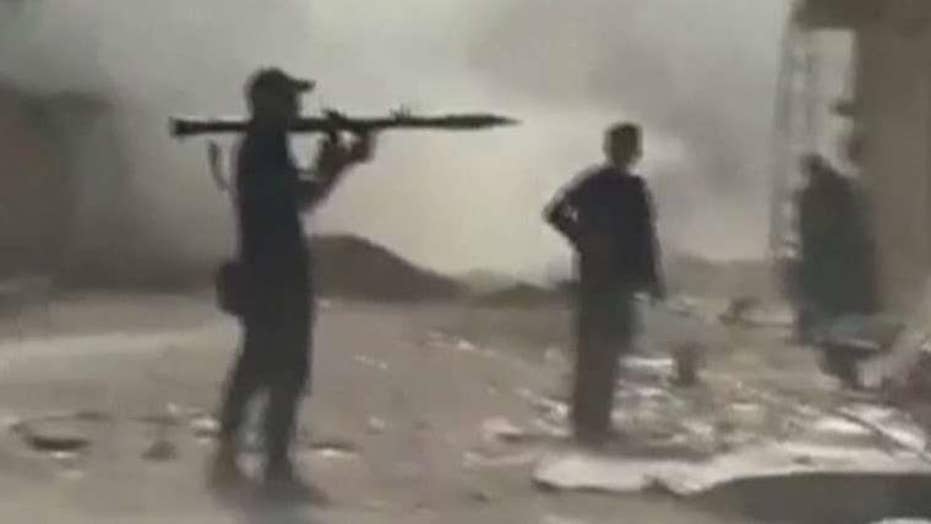 Fmr. Major General Dana Pittard says 'we are supposed to be the good guys.'

I was one of 60 members of the House of Representatives to vote against the resolution condemning President Trump’s removal of American troops from the Syrian conflict zone. I did this because America simply has no business protecting the Turkish or Syrian borders – instead, we should refocus our efforts and energy to protect our own weak borders.

Our Founding Fathers envisioned a nation that limited the power of government, empowered the individual, and could stand the test of time. The Constitution’s brilliance is often found in its simplicity. Enshrined in this simple, yet powerful document is one of the most consequential powers: to authorize the use of military force. This power belongs to Congress, and to Congress alone.

The Authorization to Use Military Force (AUMF) has been passed by Congress several times.

In September 2001 Congress authorized President Bush to use military force to combat Al Qaeda terrorists and the Taliban regime in Afghanistan following the attacks of 9/11.

If a president is going to send American troops into combat, he should have the moral courage to honor the Constitution, allow Congress to declare war, and then fight to win.

While there was no AUMF passed to authorize military action in Syria, it is exactly where we have found ourselves since President Barack Obama’s decision to strike in 2013.

My position remains the same today as it did when I spoke on the House floor in 2013: Without congressional approval, we have no business in Syria. Congress never voted to send troops to Syria, but found the courage to pass a resolution condemning President Trump’s removal of troops from Syria. That is the simplest reason for why I voted against it.

Beyond the clear constitutional parameters that enable a president and Congress to authorize military action, the Syrian conflict stuck American troops in a messy proxy war against Russia, aligned with less than ideal strategic partners.

The Kurdistan Workers’ Party (PKK) is a militant group, designated by the United States and the European Union as a terrorist organization. The PKK is a coalition of Maoists, Marxist-Leninists and other Communists. While America shares a common enemy with the PKK – the Islamic State (ISIS) – the PKK doesn’t share American ideals or have anything else in common with Western values.

As a member of NATO, the United States is a treaty-bound ally of Turkey. While Turkish President Recep Tayyip Erdogan may not be the ideal ally, we are legally obligated to defend Turkey.

I’ve had enough of our good men and women getting killed and wounded in battles that have no valid U.S. interests at stake.

In the same fashion, the Global Coalition to Defeat ISIS was formed in 2014 and has been remarkably successful in part because of American leadership, and with the help of Kurdish forces.

Now that the ISIS caliphate has been defeated, there is simply no reason for American troops to remain fighting an endless and unauthorized war. President Trump promised he would bring our troops home, stop endless wars, and defeat ISIS. That is exactly what his decision will do.

Instead of fighting wars for other countries and involving ourselves in proxy wars in the Middle East, we are putting America first.

The power to authorize military force belongs to Congress, and to Congress alone. If our great republic is to stand the test of time, we must honor our constitutional obligations and duties.

I say to those politicians who want more war: bring it to the floor of Congress, make your case and let us vote. Put your position firmly in the record. As for me, I’ve had enough of our good men and women getting killed and wounded in battles that have no valid U.S. interests at stake.

I will vote against more wars with no plan for victory and an open checkbook of taxpayer costs.

Finally, it’s ironic that so many Democrats and soft Republicans are clamoring to protect Syrian borders with our troops and money – but claim our own border should be open.