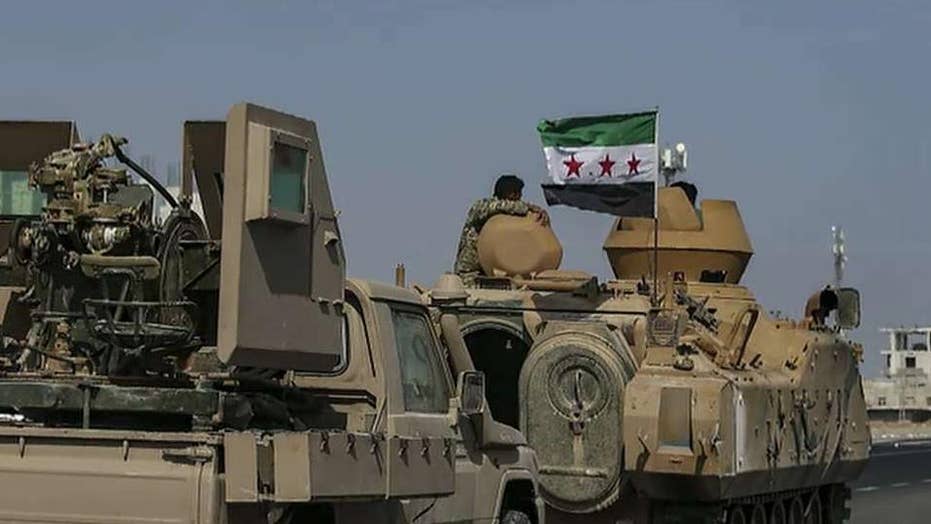 US allies in Europe respond to US withdrawal from northern Syria

When Donald Trump was running for president, he campaigned on ending endless wars and bringing members of the American military home. Last week he ordered the few special operations forces on the Syria-Turkey border to withdraw and has drawn heavily criticism from the Washington bubble for “abandoning our allies” – the Kurds.

A Republican leader has described this as “catastrophic” and at least one long-time member of Congress has said he is no longer on the “Trump train.”

One ought not to minimize the contribution to defeating ISIS made by a segment of the Kurds. To our military, these fighters were comrades in arms. However, the geopolitical landscape has changed, and President Trump is implementing a policy that hopefully will produce a more stable Middle East.

TURKEY-SYRIA CEASE-FIRE IS 'NOT A SUCCESS,' REPUBLICAN LAWMAKER SAY

If my colleagues wish to continue prosecuting the congressionally unsanctioned war in northern Syria, they can introduce a resolution that authorizes military force. They can then make their case that our involvement there is due to an articulable national security interest.

Trump’s withdrawal will result in predictable outcomes, including saving U.S. lives. Turkey wishes to gain a portion of northern Syria in order to place Sunni Muslims in that area.

The PKK (Kurdistan Workers Party, the Marxist branch of the Kurds) and Turks have deep-rooted animosity. The PKK has declared war on Turkey and carried out terrorist attacks in that country. Our own State Department deems the PKK a terrorist organization.

An offshoot of the PKK, the YPG (People’s Protection Units), is the ostensible mercenary partner enlisted by the U.S. against the Islamic State in Iraq and Syria (ISIS).

However, the Turks are concerned about U.S. cooperation with the YPG because they don’t see any separation between the PKK and YPG. In fact, it has been reported that a high-ranking State Department official admitted just this week that the YPG is the Syrian offshoot of the PKK.

All of this is incredibly complex. President Trump has offered to mediate between Turkey and YPG but has been predictably rebuffed by Turkey.

Meanwhile, Russia wants to defend Syria’s preexisting borders. It views Damascus as an ally. Kurds of many different political persuasions have begun to partner with Syria –and its ally Russia – but they will increasingly face a new Sunni Turkish buffer in the north. This buffer, by extension, will also complicate Shiite Iran’s perennial desire to influence Syrian affairs.

The Trump strategy will likely simplify the balance of power in the entirety of Syria, thereby increasing the chance of stability. In any event, the morass that has existed there for centuries – felt more acutely these recent decades – will not get worse.

Additionally, there is little chance that Russian influence will increase as U.S. efforts wind down in Syria: this great power will never risk antagonizing Israel, and it will continue to have its hands full keeping Syria and Iran in line while watching what Turkey will do next.

Trump’s strategy has the potential for success because it forces regionally interested parties to balance against each other. Any good foreign policy realist will tell you that there is more chance for lasting peace when parties balance their interests against their adversaries.

Frankly, a realist approach – long neglected in Washington – is far more likely to bring geopolitical peace and stability than our decades-long liberal approach.

The loudest voices we hear from Washington advocate for the status quo. But how long is the United States supposed to protect the PKK from the Turks? Is it to be, as one former Republican presidential candidate said, maybe 100 years?  And who are the Kurds in Syria, after all? They are a people without a nation or state, nor are they unified.

President Trump’s congressional critics have the option of passing a resolution on the use of force if they insist on further U.S. intervention in northern Syria. If we do not begin bringing home our troops now from Syria, when will Trump’s critics acquiesce to end our intervention there or anywhere else?