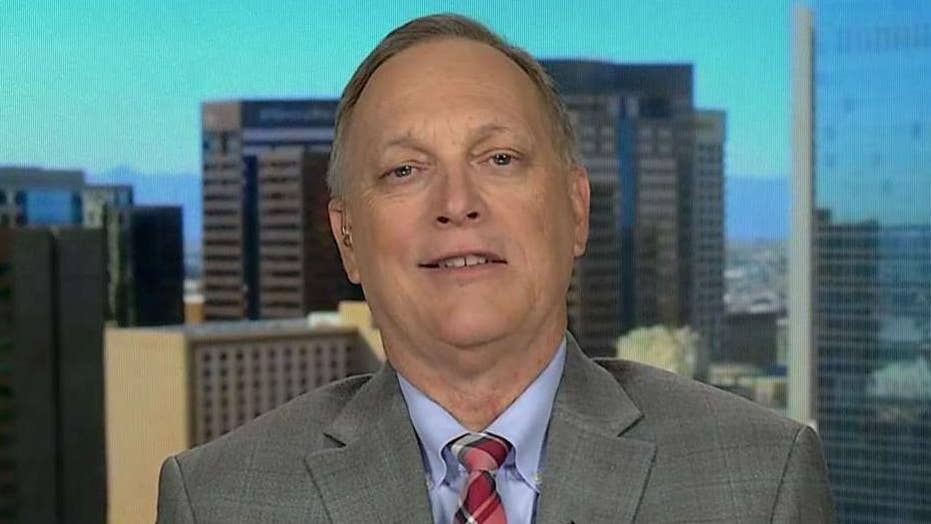 Rep. Andy Biggs: Why are the House Democrats out to get Attorney General Barr?

House Democrats are hanging onto getting the full Mueller report like it's the glory road to impeachment, the Republican lawmaker says.

Democrats in Congress are so worried that the American people will find out what is NOT in the Mueller report that they will say and do almost anything. The report exposes their false assertions that President Trump cooperated with the Russians to influence the 2016 presidential election. They will resort to embarrassing stunts like bringing fast food chicken buckets into congressional hearings. And, they will attempt to destroy the reputation of Attorney General William Barr simply because he is the messenger who released the Mueller report to the public.

House Speaker Nancy Pelosi now claims the Attorney General lied to Congress. Her accusation is outrageous because it is patently false and because she merely throws the allegation into the media wind without specifics. Her perfidy is exacerbated because she and her congressional minions, like Rep. Adam Schiff and others, have promised the world that there was direct evidence of Russian “collusion” for the past two years. There wasn’t.

Consider that House Democrat leaders are claiming Barr lied about … what? They are upset because he wrote a memo iterating the major findings in the Mueller report. They castigated Barr for the few weeks it took for him to make legally required redactions in the Mueller report before he could publicly release the report. Turns out Barr’s initial summary was accurate. And, we have a special counsel report that is available for public viewing with very few redactions, proving that Democrats weren’t telling the truth for over two years.

Barr has made a nearly unredacted version of the report available to select members of Congress, including Democrats who have a reputation for leaking classified material, but all of the Democrats have boycotted and refuse to even view it. Then, they complain that the unredacted version is unavailable.

A reasonable person might ask, “Why are the House Democrats out to get Attorney General Barr?” The answer is that they simply and viscerally hate Donald J. Trump. They still cannot believe the American voter preferred him to their candidate. They began advocating for impeachment before the president was sworn in. Democrats will say and do anything to delegitimize the president, embarrass him, and prevent his success.

Democrats are also gearing up for the 2020 presidential election. They will continue to do anything to prevent the president from being reelected. They cannot believe his regime of lower taxes and fewer regulations was the tonic to cure the anemic Obama economy. For House Democrats, the overwhelming success of the Trump economy must be overshadowed by a continued controversy, even if it is a manufactured scandal with no basis in truth.

House Democrats also are willing to metaphorically shoot the messenger because they must distract the American people from knowing and understanding that the narrative that the Democrats have been putting out for the past two years was an utter lie. House Democrats promised that the president and his campaign were working with the Russians in the 2016 election. The Mueller report refutes their story. Attacking Attorney General Barr provides a substantial distraction to their narrative failure and is an effort to cover up the exoneration of President Trump.

Democrats are also gearing up for the 2020 presidential election. They will continue to do anything to prevent the president from being reelected. They cannot believe his regime of lower taxes and fewer regulations was the tonic to cure the anemic Obama economy. For House Democrats, the overwhelming success of the Trump economy must be overshadowed by a continued controversy, even if it is a manufactured scandal with no basis in truth.

The Democrats must also be troubled that the inspector general will soon be releasing his report regarding the findings of his investigation into the abuse of power, which includes obtaining secret warrants to spy on the Trump campaign under the Obama administration. They dare not let go of their attack on the president and anyone who works with him, knowing that the IG report will likely contain damaging revelations of the Democrat National Committee and the Clinton presidential campaign working with Russians to unleash the police apparatus under President Obama to spy on the Trump campaign for political purposes.

Attorney General Barr has also indicated a willingness to investigate how this bogus special counsel investigation began in the first place. Many of us have been saying for a long time that the origins of the investigation were highly dubious. Is it possible that the Democrat smear of Barr is an attempt to undercut that investigation before it even begins?

The Democrats will continue their attacks in order to obfuscate the findings revealed in the Mueller report, to sully the president for the 2020 election, to distract from the soon-to-be-released IG report on FISA abuse, and to undercut the Barr investigation into the origins of the Russian investigation. While those are compelling reasons for the Democrats to continue their smears and antics, make no mistake, the real reason House Democrats are attacking AG Barr is not nuanced nor complicated: they simply hate Donald J. Trump.