Rep. Kinzinger on Iran: This is a failing country that's lashing out

America is currently suffering from a crisis of confidence. People are terrified that the recent rising tensions with Iran will result in World War III. The conspiracy theories do what they always do and blame America first. This doubt in the capabilities of our military and the internal divisions over the role America plays on the world stage is deeply disappointing.

Iran has crossed a line with their latest attack on the United States over international airspace, and it’s time we let the regime know that these egregiously misguided actions have very real consequences.

Some have speculated that the escalations with Iran are a direct result of President Trump’s decision to leave the Joint Comprehensive Plan of Action (JCPOA) with Iran, which was agreed upon by the Obama administration. The so-called Iran Deal of 2015 was a terrible agreement for the United States, and a treasure trove for the corrupt Iranian regime to grow in wealth and feel an emboldened sense of power to threaten our national security.

US CALLED OFF RETALIATORY STRIKE AGAINST IRAN IN LAST MINUTE: SOURCE 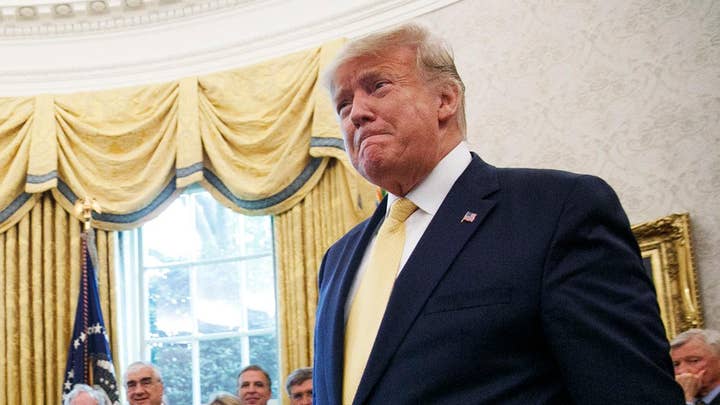 I fully supported the decision to leave the JCPOA and urged the Trump administration to deliver a comprehensive plan to hold Iran accountable, protect our own national security, and firmly restrict Iran’s ballistic missile weapons and nuclear program.

In the year that’s passed, Iran has been significantly weakened – from a shrinking economy to falling oil production. This downturn for Iran has clearly left the regime angry and desperate, as made evident by the series of provocations and lashing out against the United States, and our interests. But let’s remember, this is just the latest chapter in our 40-year history of Iran’s attacks on the United States and our allies.

Iran is the world’s largest state-sponsor of terrorism, with proxies operating on their behalf in Syria, Lebanon, Yemen, Iraq, and many others even in our own hemisphere. Without question, the Iranian regime continues to target the U.S. and our allies and has done so for decades.

Since then, Iranian-backed militias have significantly expanded in Iraq, intentionally attacking U.S. forces and targeting innocent Iraqi civilians. Their true intentions are blatant, and yet, the United States has shown incredible restraint through it all.

But now, Iran has crossed a line.

We have the ability to execute a proportional response without leading American troops to war. The U.S. could start by taking out surface-to-air missile sites, and let Iran know that we are not playing around.

The provocations by Iran are aimed at sowing chaos, both here in the U.S. and around the world. The Iranian regime took a diplomatic issue over sanctions and nuclear arsenal and responded with military actions. They felt the pressures and lashed out, and it’s time the United States show Iran that their dangerous games will not be tolerated any longer.

The U.S. military can end this desperate escalation by Iran pretty quickly, and while that’s not what we want to do, the military option must remain on the table. I certainly hope the military operation scheduled in retaliation was not called off because of a change in mind, but rather because of a tactical need. In 2013, then-President Obama notoriously canceled a strike on Syria and the ramifications from that decision are still being felt.

It’s time the people of this country remember the strength of our military and the freedoms we enjoy – freedoms and interests that are worth protecting and standing up to defend.