President Trump confirmed early Friday that he called off a retaliatory attack on Iran in response to the downing of a U.S. drone “10 minutes before the strike,” saying the number of expected casualties was not "proportionate" to what Tehran did.

In a stunning tweet thread, the president said the U.S. was "cocked & loaded to retaliate" with plans to hit three sites, but he reversed course after asking military leaders about how many would be killed.

"... I asked, how many will die. 150 people, sir, was the answer from a General. 10 minutes before the strike I stopped it, not ... proportionate to shooting down an unmanned drone. I am in no hurry, our Military is rebuilt, new, and ready to go, by far the best in the world," Trump said. "Sanctions are biting & more added last night. Iran can NEVER have Nuclear Weapons, not against the USA, and not against the WORLD!"

He also took another swipe at his predecessor Barack Obama's nuclear deal with Iran, while claiming sanctions imposed since have weakened the country. He also said more sanctions were added "last night." Existing sanctions include those covering the country’s banking and energy sectors, restricting countries from importing Iranian oil and companies from doing business with certain Iranian entities.

A source had confirmed to Fox News earlier Friday morning that the administration made a last-minute decision to call off the retaliatory strikes against Iran. But until Trump's tweets, few details about the aborted mission and the circumstances that led to the reversal were publicly available. And it remained unclear Friday whether strike plans have been definitively shelved.

Multiple news outlets, including The New York Times, Washington Post and Associated Press, had reported similar accounts of strikes being called off late Thursday — citing unnamed sources. These reports portray a mission that would have targeted Iranian missile batteries and radars.

No shots were fired and no missiles were launched, according to the AP.

Meanwhile, in Iran, the head of the Revolutionary Guard's aerospace division claimed at a news conference Friday that a manned U.S. spy plane was near the downed drone but Iran chose not to target it.

Top White House officials met earlier Thursday for a classified briefing that lasted over an hour about the drone, and those in attendance suggested that a “measured” response was likely coming soon.

Rep. Adam Schiff, D-Calif., an outspoken Trump critic who chairs the House Intelligence Committee, said the president is listening to congressional leaders who are urging caution. 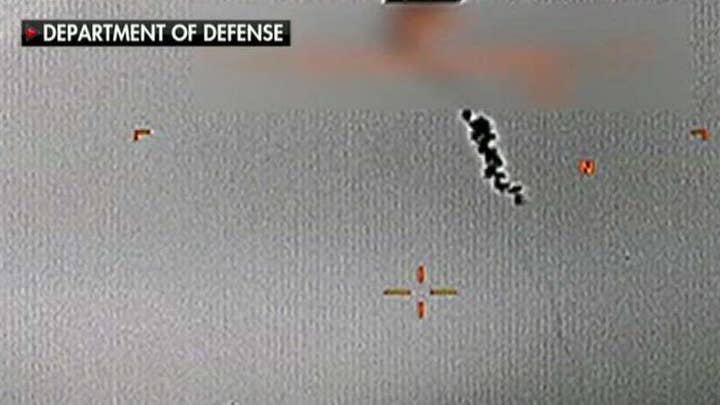 Trump told reporters on Thursday that Iran made a "very big mistake" but also said he had the feeling that it might have been the result of someone being "loose and stupid," rather than a deliberate provocation by Iran.

The Pentagon released video showing the smoke trail of the Navy drone that was shot out of the sky over the Strait of Hormuz by Iran, in what military officials described as an "unprovoked attack."

The tensions between Washington and Tehran have increased since Trump backed out of the Obama-era nuclear deal in May 2018. Iran has been under strain from U.S. sanctions after seeing its currency drop by about 60 percent in 12 months, according to European Union figures. Food and drug prices are up 40 and 60 percent respectively.

Meanwhile, the  U.S. Federal Aviation Administration issued an emergency order Thursday prohibiting U.S. operators from flying in an overwater area of Tehran-controlled airspace over the Persian Gulf and Gulf of Oman “due to heightened military activities and increased political tensions in the region.”

Fox News' Gregg Re and Talia Kaplan and Fox Business Network's Blake Burman and the Associated Press contributed to this report.