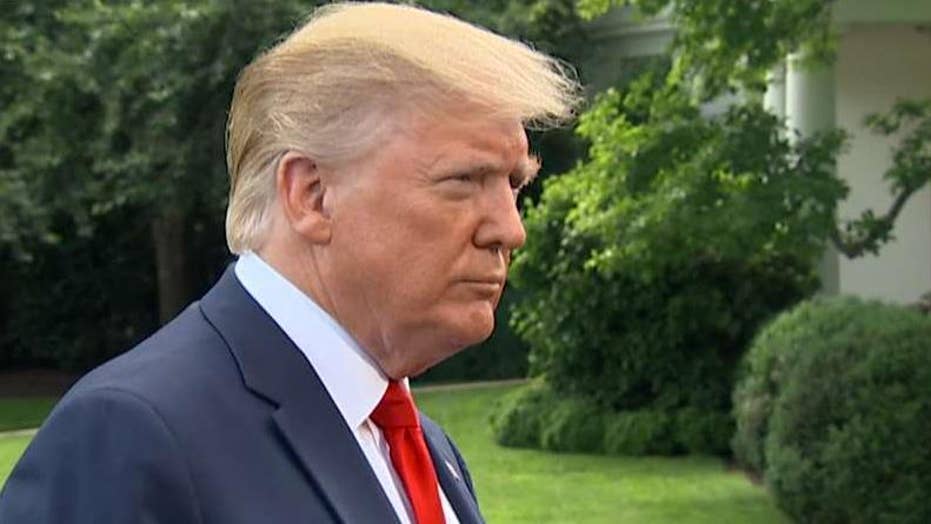 President Trump answers questions from the press ahead of 2020 campaign rally.

Here’s the bottom line requirement for a secretary of defense: a man or woman who can handle nuclear command and control.

Let’s call it a "wartime" SecDef, to use the military abbreviation.

President Trump’s has put maximum pressure on North Korea. Iran is on a countdown to a restart of nuclear enrichment. China’s military is on the loose in the Pacific. Russia is flaunting hypersonic weapons. The potential for sudden military operations in these and other global hotspots is real.

Don’t get me wrong. The president doesn’t need a restraining hand. President Trump has actually shown himself to be methodical, even cautious with the use of military force. He’s also produced a powerful national security strategy to keep the U.S. ahead of China and Russia.

Being SecDef is a tough and thankless job.

Still, being SecDef is a job like no other.

With Acting Secretary of Defense Patrick Shanahan out, Trump should be on the phone with Sen. James Inhofe, R-Okla.; former Sen. Talent, R-Mo.; and former Vice President Dick Cheney, who was SecDef in the 1991 Gulf War, to get their suggestions.

Then Trump should call Heather Wilson, who just stepped down as secretary of the Air Force. Wilson, a Rhodes scholar and five-term Republican congresswoman from New Mexico, would rock as the first female SecDef. She’s taking over the University of Texas at El Paso but maybe Texas could wait. If she won’t come, get her advice.

Also in the running is Mark Esper, now moving from secretary of the Army to the acting secretary of defense role. Esper drew up a "wish-list" of new weapons for high-intensity conflict with Russia and China and is ready to slash old Army programs to pay for it. That’s the right kind of thinking.

Washington tends to get wrapped up in reforming the Pentagon and wrangling over defense spending. Yet in the end, Congress can take care of the defense budget. They have four separate committees that know every dollar and program.

The one absolutely essential task of the secretary of defense is to help the president with command and control of military operations. And oh boy, do we have plenty of those right now. The secretary of defense has to be there with the answers – or the officers who have them – when it’s time for an airstrike or humanitarian operations or a stand-off with intrusive Russians.

The most extreme case is initiation of nuclear war. They drill for it all the time as part of deterrence. The SecDef is in a super-secure conference call as the president discusses threat assessments and issues orders to Air Force Gen. John Hyten, commander of United States Strategic Command. STRATCOM launches the B-52 and B-2 bombers, missiles and submarines. Mattis spent hefty time reorganizing nuclear command and control.

The two-way conduit between president and secretary of defense calls for real wisdom and an ability to hash out solutions under pressure. You need facts, figures and strategy at your fingertips.

Yes, the chairman of the joint chiefs of staff is there, but he is technically just an adviser, albeit an important one. When combatant commanders request forces for action in Afghanistan or Syria or Venezuela or the Pacific, the secretary of defense must give the president insight and options.

The next secretary of defense must also guide a reset in Afghanistan if talks with the Taliban succeed. There will be at least a waiting game with Iran, and possibly a naval confrontation.

A little vision would help, too. President Trump’s creation of a Space Force as a sixth branch of the armed services is still in the works. China and Russia have counter-space capabilities – meaning they can hit our satellites. Complex future force shaping issues are crying out for SecDef leadership.

Bonus points for a secretary of defense who likes engaging with Congress.

Being SecDef is a tough and thankless job. Jay Carafano at the Heritage Foundation summed up the overall qualifications in December 2018. Trump "doesn’t need an ideologue," wrote Carafano. "He doesn’t need a business person. He needs a solid, conservative national-security leader."