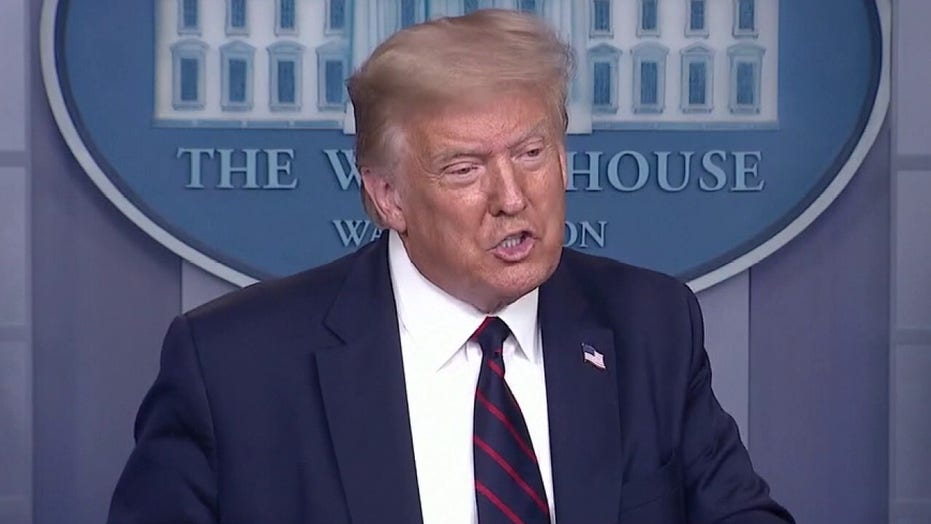 Many people misinterpreted President Trump’s tweet Thursday morning about a possible delay in the Nov. 3 election as a threat by him to postpone the election. But that’s not what his tweet said — and in any event, no president has the power to delay Election Day.

"The president is simply raising a question, whereas Democrats are proposing an entirely new system (of massive mail-in voting) that will result in enormous delays in the election results," a senior Trump administration official told Fox News Thursday afternoon.

In a morning tweet, the president wrote: “With Universal Mail-In Voting (not Absentee Voting, which is good), 2020 will be the most INACCURATE & FRAUDULENT Election in history. It will be a great embarrassment to the USA. Delay the Election until people can properly, securely and safely vote???”

As I have explained previously, only Congress has the constitutional authority to change the date of the federal general election.

The date for both congressional and presidential elections has been set by law as the first Tuesday after the first Monday in November since 1845.

Congress could delay the November election if it passed an amendment to federal law and the president signed it. But the likelihood of that happening is virtually nil, and this was made clear by bipartisan criticism of the president’s morning tweet from House and Senate members.

Congress has never delayed a federal election, even during the Civil War and World War II. Doing so would be a mistake, and it’s clear that isn’t going to happen.

Even during the coronavirus pandemic that has so disrupted our lives, it would be a mistake to go to an all-mail election.

Despite the coronavirus pandemic, experience shows that we can vote safely in-person as long as election officials implement the safety protocols recommended by health experts in polling places — the same protocols we are all using when we go to the grocery store or pharmacy.

The Centers for Disease Control and Prevention released such guidelines June 22. I voted safely in-person in my town council election recently in Virginia with those types of health precautions in place.

Even during the coronavirus pandemic that has so disrupted our lives, it would be a mistake to go to an all-mail election. Concerns that President Trump has raised about mail-in voting are based on documented problems we have seen with such voting.

Mail-in ballots are the ballots most vulnerable to being altered, stolen, or forged. Just look at the current investigation going on in Paterson, N.J., over a recent municipal election conducted entirely by mail.

Four Paterson residents have already been charged with criminal election fraud, including a councilman and councilman-elect. Evidence is surfacing of everything from voters reporting that they never received their absentee ballots (even though they are recorded as having voted) to accusations that one of the campaigns may have submitted fraudulent ballots.

Mail-in ballots also have a higher rejection rate than votes cast in person. In the Paterson case, election officials apparently rejected one in five ballots for everything from signatures on the ballots not matching the signatures of voters on file, to ballots not complying with the technical rules that apply to absentee ballots.

New York, which has taken more than a month to count the ballots from its June 23 primary election, is also reporting a similar rejection rate. This should be considered unacceptable by anyone believing in fair and accurate elections.

These kinds of technical problems — when a voter doesn’t provide all of the information required with an absentee ballot — occur because there is no election official in people’s homes to answer their questions. At polling places, by contrast, election officials can try to remedy any problems a voter encounters.

Then there is the problem of mail-in ballots being miscarried or not delivered by the U.S. Postal Service. States with recent primaries, including Wisconsin and Maryland, have reported voters not receiving their ballots or not getting them in time to be voted and returned.

In addition, there have been problems with the Postal Service not postmarking ballots, making it impossible for election officials to determine whether the ballots were mailed in time to be counted. The U.S. Election Assistance Commission says that in the last four federal elections, 2.7 million mail-in ballots were misdelivered and 1.3 million were rejected by election officials.

In the 2016 election, almost 130 million Americans voted. Does anyone really think the Postal Service will be able to suddenly handle 260 million pieces of additional mail — that is, the ballots being mailed out by election officials, and then mailed back by voters? Just from a practical standpoint, that is asking for chaos and mass disenfranchisement.

Inevitably, it will take longer to tabulate the results of the election if there is a massive amount of mail-in voting, particularly in close races for the presidency and down-ballot offices.

But if the outcome of the election is still in doubt by Jan. 20, 2021 — the day the Constitution says the winner of the presidential election is supposed to be sworn into office — due to litigation and/or the long delays in counting mailed ballots, the 20th Amendment to the Constitution provides that Congress “may by law provide…who shall then act as President.”

Under 3 U.S.C. § 19, Congress has provided that the speaker of the House shall upon his or her “resignation as Speaker and Representative” act as president until a president or vice president has been determined.

Americans should insist on their right to vote in-person in their polling places in November, where they can be sure their ballots are safely received and counted.

That assessment is just as true today as it was eight years ago. Voters should not be forced to deal with the problems that massive voting by mail would create.