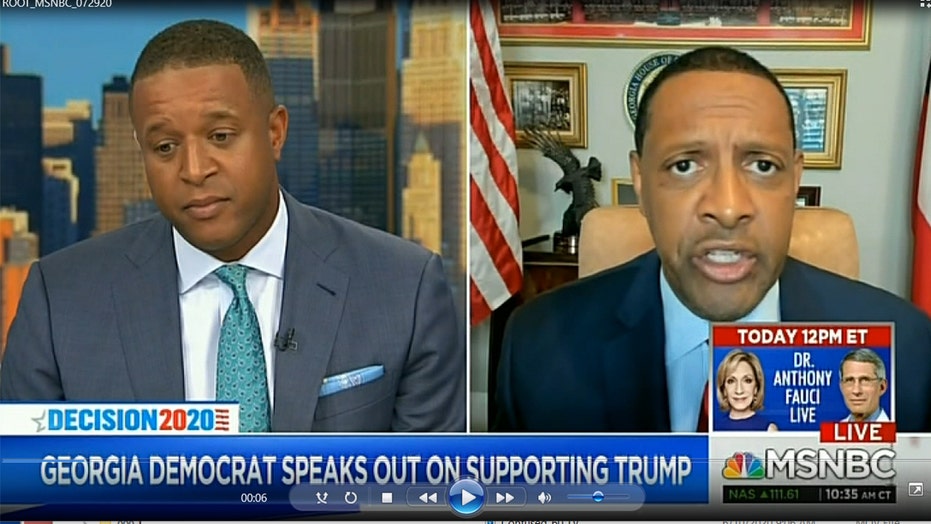 “You’re not going to imply that I asked that question because you’re Black," MSNBC’s Craig Melvin insisted after asking me if I were being paid to support President Trump.

He’s right. I’m not going to “imply” that he chose to impugn my motives because I am a Black Trump-supporter; I’m going to come right out and say it. MSNBC asked me a question it would never dream of asking a Black Democrat like me if I were on their station defending Joe Biden.

The network did it in order to perpetuate a myth that makes its predominantly-White, liberal audience members feel good about themselves. The myth is that the only African-Americans in the country who support the president are financially motivated hucksters putting on a minstrel act for some imaginary cigar-chomping conservative White man.

Despite Mr. Melvin’s protestations, I cannot recall a single instance of the network asking a question like that of any one the deep roster of Black faces it has on to defend every embarrassing gaffe and racially insensitive remark that comes out of Joe Biden’s mouth.

It’s a narrative that MSNBC’s White viewers crave because it lets them feel like one of the “good Whites” who stand selflessly on the side of poor, helpless Black people — who they casually assume are universally in favor of the big-government policies favored by their White “allies.”

It’s a demonstrably false narrative. In 2016, more than 1.3 million Black Americans cast their ballots for Donald Trump, a marked improvement over Mitt Romney’s performance despite a desperate campaign by MSNBC and other mainstream media outlets to convince us that Trump was an unforgivable racist.

Since then, President Trump’s performance in office has delivered more genuine economic prosperity and social progress to Black Americans than any of his predecessors, Obama included. The results have convinced many more Black people who are “supposed to” vote for Joe Biden to come over to the MAGA movement.

I am one of them — and not only was I not paid to make my decision, it didn’t even require me to adjust any of my principles or beliefs.

I was elected in Georgia as a Democrat in three separate decades. I don’t support Donald Trump because I’ve changed my ideas on what’s important; I support him precisely because I have not changed.

I got involved in politics in order to help working people in my community — especially the Black people who had gotten the short end of the stick in successive Democratic and Republican administrations — not to join in the social crusades of an over-educated and overwhelmingly liberal elite.

I support Donald Trump because he is objectively better at lifting Black people — and all people — out of poverty and into prosperity and upward mobility than any big-government Democrat has any hope of being.

MSNBC’s cynical question, posed to me and my fellow Trump-supporting African-Americans, is intended to intimidate us and keep us from expressing that plain truth. If MSNBC can get away with casting people like me and Bruce LeVell as paycheck-hungry, desperate sell-outs, then its viewers can go on pretending that Black Trump supporters like us do not exist.

They won’t be able to play that game after November, when the president will outdo his 2016 support among Black voters. Are they going to imply that millions of us are all being paid?

Vernon Jones is an American Democratic politician from the U.S. state of Georgia. Jones was chief executive officer of Dekalb County, Georgia, from 2001 until 2009, and in the Georgia House of Representatives from 1993 to 2001. Jones was elected to the Georgia House in 2016. Jones is also an Advisory Board Member for Black Voices for Trump.

Republican Vernon Jones serves as a representative in the Georgia House of Representatives.