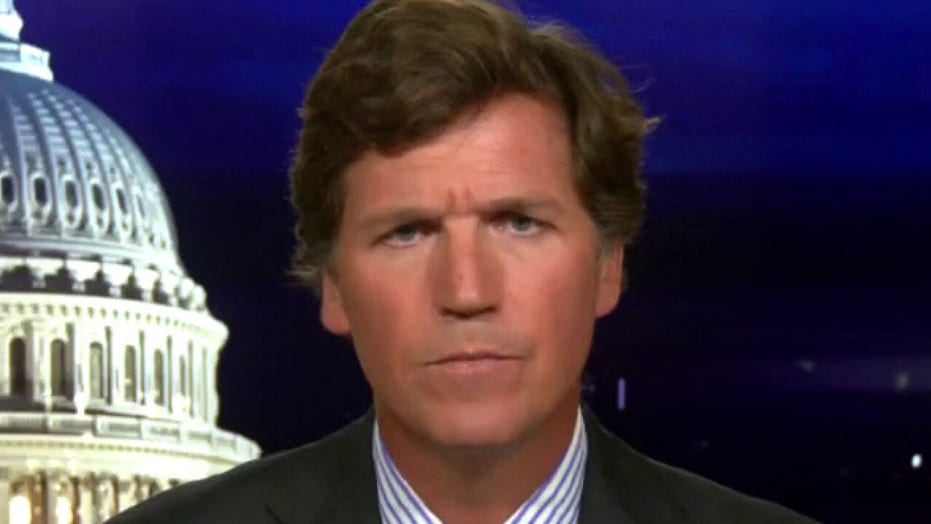 Tucker: Joe Biden's VP pick will be the most consequential in history

Presumptive Democratic presidential nominee Joe Biden could win in November. But he isn't capable of running the country.

Believe it or not, this is Joe Biden's third attempt to run for president. History is lost when you live in the eternal present as we are now, but it's worth remembering some facts -- three times.

The first time Biden ran was in 1988. That was before most of the people who work on the show were born, and he was caught lying about his biography in speeches and forced to drop out.

Biden suggested to audiences that he had grown up in a coal mining family in Wales. That's not true. Joe Biden is actually from America. His father sold cars in Wilmington. Biden went to a Catholic prep school in the suburbs. So it was pretty embarrassing.

It took 20 years before Biden ran again. And when he did, it did not go well. In 2008, Joe Biden got a total of one percent of the vote in the Iowa caucuses, and he dropped out that night.

Joe Biden, whatever his strengths, turns out to be so bad at running for president that even Barack Obama, supposedly his close friend, repeatedly refused to endorse him. He just can't win. That was Barack Obama's view.

Then the Wuhan coronavirus arrived. Democratic governors shut down the country. Millions lost their jobs. The economy tanked. Americans huddled in their homes cut off from one another and deeply miserable.

From his basement, strategically cloistered away in silence, Joe Biden shot ahead in the polls, not because of anything he did. He just happened to be there.

As of tonight, Joe Biden could win the race. Unfortunately, if he does, Joe Biden cannot govern the country. He isn't capable of it. He's all but admitted that. He said he won't run for a second term.

So Biden's running mate will be the most consequential VP pick in American history, and soon we'll know who it is. Apparently, the announcement is coming in the next week.

As of tonight, Sen. Kamala Harris of California seems like the frontrunner. She is certainly the best known. Harris is a product of the same highly credentialed, yet deeply unimpressive world that spawned too much of our media. Needless to say, they love her. She's one of them.

The public, though, has been much less impressed, including Democrats. Harris was so unpopular with Democratic primary voters that she never made it to the first vote in the primaries.

When she dropped out in December, Harris was polling at around three percent. The wrap on Harris in exit polls is that she is a fraud. She doesn't really believe in anything. She'll say whatever it takes. Of course, that is also Harris's primary strength. Here she is promising free health care to illegal aliens.

JAKE TAPPER, CNN ANCHOR: So you support giving universal health care and Medicare-for-All to people who are in this country illegally?

SEN. KAMALA HARRIS (D-CALIF.), FORMER PRESIDENTIAL CANDIDATE: Let me just be very clear about this. I am opposed to any policy that would deny in our country any human being from access to public safety, public education or public health. Period.

CARLSON: Oh, now wait a second, you may be wondering. I'm sitting in my house, maybe unemployed, paying a huge percentage of my net worth for health care. So why should people who aren't even allowed to be in this country in the first place get it for free at my expense?

And by the way, how can a government that's already $27 trillion in debt afford to pay for the rest of the world's medical bills?

Now, those are all good questions. Kamala Harris has no answers. Fixing problems is not the point of the exercise, winning is the point. And over the years, Harris has been willing to do pretty much whatever it takes to win, including using the power of her office to crush political opponents.

As the Attorney General of California, Harris relentlessly defended her big donors in the abortion industry. When a journalist called David Daleiden criticized Planned Parenthood in a documentary, Kamala Harris sent the police to his home. Daleiden later described the authoritarian nightmare Harris unleashed on his life.

But that's what Kamala Harris went ahead and did at the behest of Planned Parenthood in order to cover up for them and in order to protect them from increased further scrutiny for the crimes of selling aborted baby body parts, sometimes from criminal partial-birth abortions.

CARLSON: So I think we can conclude from this episode that Kamala Harris or any politician willing to use law enforcement to stop journalism she doesn't like probably doesn't care too much about civil liberties or equality under the law, and indeed, she doesn't.

Harris supports allowing universities and employers to discriminate based on the skin color of applicants. What decade is this?

She supports race-based reparations. She'd like to rewrite the Constitution to eliminate the Electoral College because it's inconvenient.

To give you some perspective on these positions, just 10 years ago, Barack Obama would have run away from them. That's how much the Democratic Party has changed, and if you're looking at more evidence of that change, you should also know that Joe Biden is considering Congresswoman Karen Bass of Los Angeles as his running mate. She's also on the shortlist.

Unlike Kamala Harris, Karen Bass is not a fraud. Karen Bass means it. She's sincere. She's an unapologetic, leftwing bomb-thrower who spent decades working to help Fidel Castro in his Cold War against the United States.

Karen Bass kept praising Fidel Castro all the way to his death just four years ago.

In the 1970s, Karen Bass belonged to a group that the LA Police Department accused of training revolutionaries, in quote, "terrorist tactics and guerrilla warfare." Bass apparently visited Cuba multiple times a year.

So it's not pejorative to note that Karen Bass is not a mainstream figure. She literally co-sponsored the New Way Forward Act. That is a lunatic bill that would force the U.S. government to reimport at taxpayer expense hundreds of thousands of illegal aliens whom we've deported for committing crimes. Bring them back here, in many cases, violent crimes. For real.

Karen Bass is so extreme that, like Kamala Harris by the way, she's currently trying to repeal California's main anti-discrimination law. Bass wants to make racial discrimination legal as it was before the Civil Rights Movement. We are not overstating this. Karen Bass has issued press releases bragging about it.

You may not have heard about any of this. The details are so shocking that virtually no media outlet bothers to cover them. But it is all real. Look it up before it's scrubbed.

Keep in mind, this is the person, these are the people who could soon be running our country.