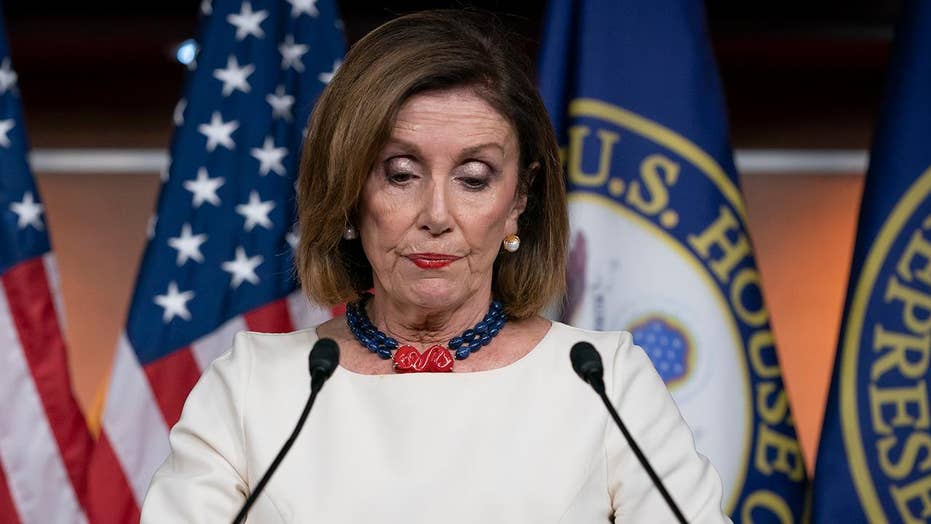 House Speaker Pelosi says impeachment is worth losing House over

One of the most telling characteristics of a partisan investigation is that there’s a rush to judgment before the facts come in. Look no further than the recent headline by The New York Times editorial board, “Why The Trump Impeachment Inquiry Is the Only Option.”

Seriously? The only facts we have is the transcript and a complaint from an anonymous whistleblower who’s already been identified by the inspector general as having an “arguable political bias.” Before "Trump derangement syndrome" set in, the Gray Lady would have asked Congress to respect the process. But not with President Trump.

The process of starting an impeachment investigation of a president of the United States is no small matter. You don’t consider undoing the will of 63 million people unless you fully investigate the matter first.

An impeachment inquiry before gathering facts is totally premature, but these rabid Democrats are desperate. Congressman Al Green, D-Texas, admitted that Trump will be reelected unless he’s impeached. House Speaker Nancy Pelosi won’t even slow down long enough to hold a vote on the House floor to approve the start of an official impeachment inquiry, because we know this is all political.

No one knows the pitfalls of rushing to judgment better than Pelosi’s chief investigator in this latest political witch hunt, Intelligence Committee Chairman Adam Schiff, D-Calif. Who can forget Schiff being hoodwinked on a phone call by foreign radio hosts claiming to have dirt on Trump? Not only did Schiff take the phony bait hook, line, and sinker, but it showed his willingness to collude with purported Ukrainians looking to interfere in our democracy.

Schiff is a garden-variety political hack, plain and simple. He didn’t waste any time solidifying that reputation when he falsified the transcript of the Trump-Zelensky phone call in his opening statement at a hearing with the director of national intelligence.

Political calculations, such as artificial timeframes and deadlines, must not be present during the impeachment decision making process. The facts need to come in and then carefully considered; only then can decisions be made in an appropriate fashion. Headlines such as "Articles of impeachment by Thanksgiving? Pelosi wants to move 'expeditiously'" reek of a fatally flawed investigation destined for the ash heap of history.

Make no mistake; Pelosi made an enormous mistake by coming out in favor of an impeachment inquiry before the transcript of President Trump’s phone call with Ukrainian President Volodymyr Zelensky was even released to the public. Pelosi’s knows better because she’s seen this situation play out before.

Pelosi said in 1998 that Republicans on Capitol Hill were “paralyzed with hatred” with their quest to impeach President Clinton. Any objective American would tell you that the same could be said of Pelosi’s Democrats in the U.S. House of Representatives today.

The latest effort to impeach President Trump with the so-called CIA whistleblower is already coming apart. First and foremost, the whistleblower did not personally listen to the president’s phone call with the new Ukrainian president. Secondly, The Federalist reported that between May 2018 and August 2019, the intelligence community changed its whistleblower rules that only allowed persons with firsthand accounts to file a "disclosure of urgent concern” form.

Convenient timing, isn’t it? Schiff should explain what he knew about this rule change and when he knew it.

Another mistake commonly made by overzealous congressional investigators is that they build expectations to a level they can’t possibly meet. Last week’s circus is no exception. First, the transcript was supposed to reveal a quid pro quo. That didn’t transpire. Next, the transcript was going to show President Trump pressuring his fellow world leader. That didn’t work out either. Then the call was going to indicate that President Trump mentioned former Vice President Joe Biden about eight times throughout the call. That didn’t pan out either.

The bottom line is that what happened on this call does not rise to the level of an impeachable offense.

The senators even went as far to say “as strong advocates for a robust and close relationship with Ukraine, we believe that our cooperation should extend to such legal matters, regardless of politics.” These senators asked Ukraine to help Mueller. Why can’t President Trump ask Ukraine to help Attorney General William Barr?

The dishonest mainstream media refuses to cover the contents of this letter in comparison to the Trump-Zelensky phone call, and will not face reality about the Biden-Ukraine quid pro quo that the blowhard former vice president bragged about publicly on video.

The Democrats are desperate to find something and this will backfire just like the Russia collusion lie. Unhinged anti-Trump committee chairs Schiff, Jerry Nadler, D-N.Y., Maxine Waters, D-Calif., and Elijah Cummings, D-Md., have been working to impeach Trump since the day he took office. It’s devolved into a sick political obsession and the American people see it for what it is.

An impeachment investigation will choke from a lack of oxygen if the American people think it’s being driven by politics. Public support and polling data drives the decision-making process for members of Congress. If the public isn’t behind an impeachment drive, it will never be successful.

Furthermore, if Pelosi makes the decision to plow forward regardless and impeach the president in a party line vote, not only will the effort fail in the Senate, Democrats will pay a high price on Election Day 2020. Imagine President Trump being impeached by the overzealous partisans in the Pelosi-led U.S. House and then being overwhelmingly re-elected by the American people.

Democrats had their chance for three years with the Russia collusion myth and they failed. If they want to defeat President Trump, the best idea would be to try it at the ballot box. But it won’t be easy to defeat peace and prosperity.