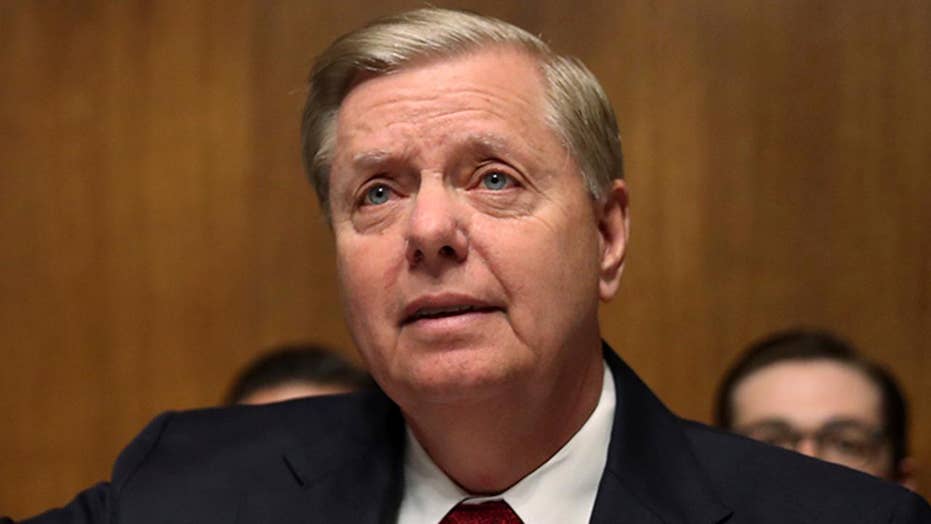 Sen. Lindsey Graham reads text messages from fired FBI agent Peter Strzok to Lisa Page, including one calling Trump a 'f---ing idiot,' during his opening statement to the Senate Judiciary Committee hearing on the handling of the Mueller report.

Senate Judiciary Chairman Lindsey Graham, R-S.C., stirred an already simmering pot this past Wednesday when he read aloud an unedited expletive laden text message from former FBI agent Peter Strzok to jumpstart the grilling of Attorney General William Barr over his handling of the Mueller Report.

The senator apologized to the “kids” in the audience for the R-rated content and continued to lament the controversial and crass exchanges between Strzok and his bureau counterpart and romantic interest, Lisa Page.

The use of profanity is not new, of course, and not by a long shot.  History suggests it dates back at least seven-hundred years to the medieval period, but it’s likely that its use is even older than that.

But if the use of profanity is not novel, surely the proliferation of it in otherwise polite company is something of a modern-day phenomenon.

In fact, I was a bit startled to pick up the Wall Street Journal a few weeks ago and see an unedited swear word on the front page.  The author of the article was simply quoting President Trump, someone who is known for “colorful” language both in private and, occasionally, on social media.

Presidential profanity is legendary and bipartisan. Andrew Jackson's use of curse words was so common that his parrot swore up a storm at a memorial for his deceased owner. Time once noted that Abraham Lincoln was never caught swearing on tape - but only because audiotape hadn't yet been invented.  JFK swore like a sailor - because he was one.

But journalists used to censor in order to protect sensibilities and maintain a certain editorial decorum. Not so much anymore.

Call me old-fashioned or hopelessly idealistic, but this trend saddens me, as does the overall coarsening of culture.

If you want to widen your world, widening your vocabulary is a good place to start.

As the father of three young, impressionable boys, I cringe when we’re out at a sporting event and encounter fans letting the expletives fly. But it's not just at stadiums. I hear it in restaurants, malls, even in Little League. It always raises the question: should I say something – or simply ignore it? I usually try to distract and redirect my boys' attention.

It's interesting that most kids are drawn to profanity like moths to light. I guess it somehow seems cool and rebellious. Some of my friends cursed so much growing up that I really didn't have to, though I was surely no angel either.

Our little guys are in the "potty humor" phase these days but surprised me some time ago when one accused the other of calling him the "f" word. "Will called me a 'fool!' Alex complained.  Not to be outdone, Will replied, "Yeah, well he called me the "e" word. He called me an 'eediot!'

Of course, the severity of swearing falls somewhat on an arbitrary, sliding scale, and not all vulgarities are created equal.  Maybe that’s because “Hell” is a real place and the concept of “damnation” is biblical. But context, use and intent are everything.

Growing up, my mother used to remind us that profanity was the sign of a poor vocabulary, a thought that echoed President Theodore Roosevelt’s insightful, rhetorical question: “Why curse when there is such a magnificent language with which to discourse?”

President Roosevelt had a point. There are hundreds of thousands of words in the English language – yet studies show most people use the same thousand or so ones every day.  If you’re inclined to express yourself forcefully, why not be a bit creative and utilize some of the many other available words in the English lexicon?

It would be difficult, if not impossible, to overstate the power of the tongue and the danger that accompanies the weaponization of our words. We have the freedom and opportunity to be either profane or to season our vocabularies and conversations with words of encouragement and good cheer, sentiments that leave a smile and put a spring in the step of another person.

Good language is one of the golden keys to better living and the surest antidote to a profane and vulgar world.

If you want to widen your world, widening your vocabulary is a good place to start.