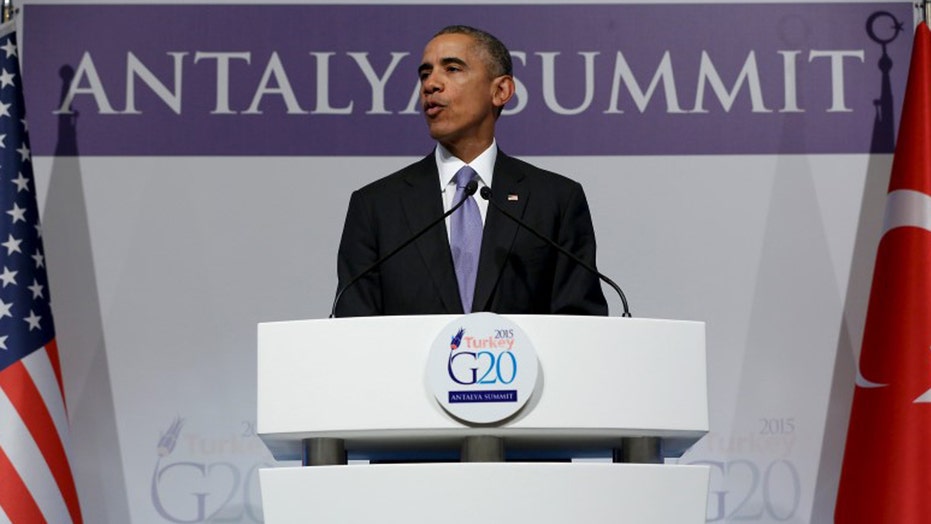 Is Obama clueless on taking out ISIS?

Following the ISIS attacks on Paris, to say that President Obama looks weak on the world stage would be an understatement. And Monday’s performance at the G-20 summit in Antalya, Turkey, was an embarrassment.

In tone, his remarks were defiant, arrogant, and dismissive. In substance, he offered no ideas or proposals for combating the ISIS threat. Indeed, he openly rejected the idea that America should lead, saying:

“But what I'm not interested in doing is posing or pursuing some notion of American leadership or America winning, or whatever other slogans they come up with that have no relationship to what is actually going to work to protect the American people, and to protect people in the region who are getting killed, and to protect our allies and people like France. I'm too busy for that.”

This could have been a Churchillian moment for the U.S. president, rallying the free world at a time of great crisis. But as we know from Obama’s extensive track record of inaction and foreign policy disasters, he is no Winston Churchill.

President Obama is in denial with regard to the scale of the threat facing the free world. He refuses to acknowledge that we are at war with a vicious and brutal enemy driven by Islamist ideology.

Instead, it was clear that the leader of the free world has no strategy for winning against ISIS and nothing to say except to condemn his critics at home, whom he seems to think are his biggest enemy. Even French President François Hollande has shown more resolve in the wake of the Paris attacks than the U.S. president, which is a damning indictment of the White House’s approach.

This is all music to the ears of America’s enemies, who are taking advantage of Washington’s weakness on the world stage. President Obama is in denial with regard to the scale of the threat facing the free world. He refuses to acknowledge that we are at war with a vicious and brutal enemy driven by Islamist ideology. These are not merely “violent extremists” as Obama likes to call them. As British Prime Minister David Cameron has noted, the West cannot rest until “we have defeated this evil terrorist death cult, and the poisonous ideology on which it feeds.”

We must be under no illusions about the nature of the enemy we face and what needs to be done. Our enemies seek to destroy us and everything we stand for. In other words, our civilization faces a grave threat. Such times demand resolve and strength on the international stage.