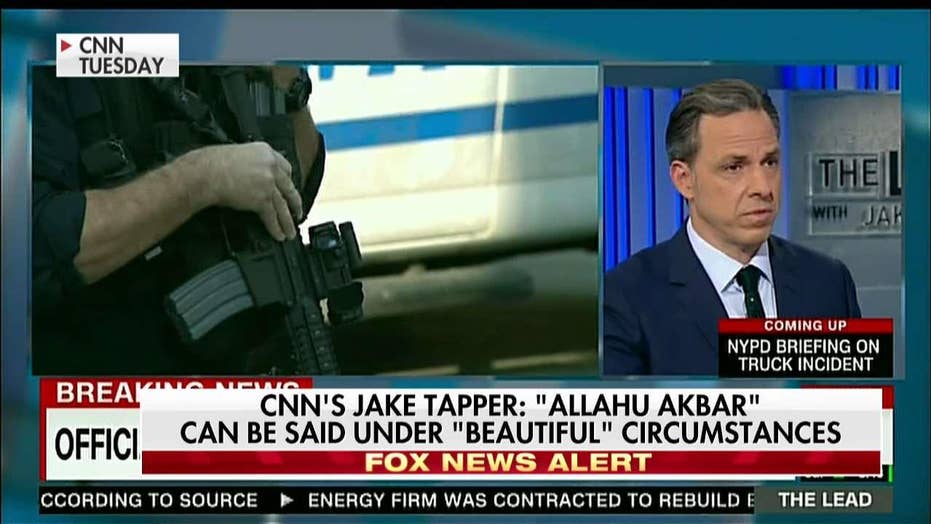 The media have a playbook to downplay any connection between terrorist attacks and Muslims.

First, journalists avoid the politically incorrect phrase “radical Islamic terrorism,” sometimes blaming the weapon, not the attacker for the terrorist strike. Then they move into defensive mode for the Muslim community. Lastly, they blame Republicans and conservatives for politicizing a deadly attack, often while politicizing the attack themselves.

Journalists ran all of those plays when an Uzbeki Muslim man was accused of running down and killing eight people and injuring a dozen others in New York City on Halloween. Sayfullo Habibullaevic Saipov was charged by the U.S. Attorney's Office with one count of material support of a terrorist organization and one count of violence and destruction of a motor vehicle.

The journalistic response was predictably awful. Several outlets – ABC News, CBS News, CNN and HuffPost among them – used headlines about “truck rampage” or something similar to a truck attacking the victims. This was after news outlets were reporting the attacker had shouted “Allahu Akbar” (Arabic for “God is greater”) as he exited his vehicle.

Then the PR effort shifted into high gear. The New York Times ran two separate pieces defending the use of “Allahu Akbar,” including: “I Want ‘Allahu Akbar’ Back.”  The Times did all it could to downplay the Muslim connection to terror, asking “When is an attack terrorism?” The paper tried desperately to make the terrorist seem to be a deranged man like the gunman in Las Vegas, even noting how he had “monsters inside.”

NBC ran a much-mocked piece warning how “some Muslim Americans and community leaders expressed concerns over how their religion would be perceived and whether Muslims would become targets of violence.”

CNN’s Chris Cuomo (D-Less Famous Cuomo) pretended Trump was attacking a Muslim simply because he was a “brown guy with a beard.”

MSNBC terrorism analyst Malcolm Nance did much the same. He claimed that “what you’re seeing is not Islam, whatsoever.”

Then the media shifted into the gun debate. New York Times columnist Nicholas Kristof was skewered online for tweeting: “The NYC terrorist had a pellet gun and a paintball gun. Good thing that in NYC he couldn't buy assault rifles, or the toll would be higher.” Kristof added that truck licenses were “the model for gun safety.”

Soufan Group CEO and MSNBC guest Ali Soufan told “Morning Joe” that the terrorists “want to divide us.” He added, shockingly, that President Donald Trump concurred that the terrorists had a powerful message. “President Trump agreed with them in that by dividing our country further today.”

2. More Sex Scandals: Media sex scandals are increasing. New allegations against actor Kevin Spacey include what Vulture.com described as a “sexual relationship” with a 14-year-old boy that ended in attempted rape. This is only the most serious of the new allegations. The Advocate actually knew about the allegations against Spacey in 2001 but refused to report them following its “no outing” policy of anyone who was gay. Spacey has already lost his starring vehicle  “House of Cards” on Netflix.

That wasn’t all. “NPR's Senior Vice President for News, Michael Oreskes, has resigned following allegations of sexual harassment from several women,” announced NPR. That followed claims he kissed two women on the lips while discussing job prospects. “An NPR employee has also come forward publicly about harassment that allegedly occurred during a business meeting-turned-dinner in 2015,” added NPR.

3. Former DNC Head Blasts Clinton Deal: One of the biggest media stories of the week came from an article by former Interim Democratic National Committee Chairwoman Donna Brazile for Politico. Brazile blasted a deal the party cut with Hillary Clinton long before she ever defeated her opponent for the Democratic president nomination, Sen. Bernie Sanders of Vermont.

Brazile said an agreement between the party and the Clinton camp “was not illegal, but it sure looked unethical.” Vox called it a “bombshell.” Several outlets keyed off of a comment by Sen. Elizabeth Warren, D-Mass., agreeing that the campaign had been rigged.

This was an incredible example of Democrats tearing each other apart, though Brazile conveniently forgot to mention her own efforts to leak debate questions to Clinton. The result was almost guaranteed. ABC, CBS and NBC all ignored  the story Thursday night when it broke.

4. Sins Of Omission Are Worse Than Commission: It’s not just what journalists report, it’s what they don’t. This week featured the 500th anniversary of the Protestant Reformation, perhaps the biggest religion story in 500 years – especially for Catholics and Protestants. It also set the stage for wars, discovery and alliances for centuries.

Thankfully, the broadcast networks covered an anniversary that day – the 10th anniversary of the iPhone. They loved it so much it got nearly 5 minutes of coverage. They set aside nothing for the Reformation anniversary. It’s hard to make the disconnect between journalists and people of faith more obvious.

That was only one of several prominent stories the broadcast networks chose to skip this week. There was no network coverage of how Alexandria, Va.’s historic Christ Church was removing two plaques that had been in the church for nearly 150 years. The plaques honored President George Washington and Confederate Gen. Robert E. Lee. It’s worth noting that Trump had predicted the left would go after the founders like Washington. He was entirely accurate.

The networks love political scandals – until Democrats get charged. None of the broadcast evening news shows have reported on U.S. Senator Bob Menendez’s corruption trial since it began Sept. 6.

And over at ABC’s “The View,” censors inexplicably censored the word “Jesus” two times in one discussion. Co-host Paula Faris mentioned "Jesus" twice – or at least she tried to do so, before someone intervened. Sometimes journalists are exactly the stereotypes we believe they are.

Hurray For Hollywood: Entertainment is a reminder just how liberals really feel. Rapper Snoop Dogg posted a photo to Instagram that he later deleted showing him next to a supposed corpse with a toe tag reading “Trump.” The play on words invokes one of America’s most notorious gangs: “Make America Crip Again.”

“Ferguson,” journalist and playwright Phelim McAleer’s play about the incidents in Ferguson, Mo., sadly is closing its New York run this Sunday. McAleer was highly critical of the media narrative. So his “verbatim theater” play featured only the dialogue from the trial. The drama was taken “from the 25-day grand-jury proceedings that resulted in a decision not to charge” Officer Darren Wilson, according to National Review.