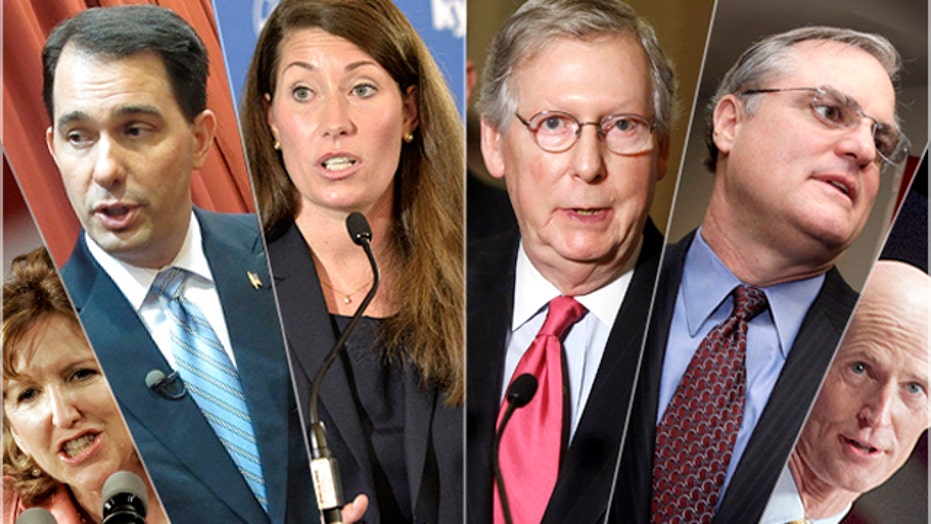 Inside the 2014 Midterms campaign trail

Behind the scenes in the 2014 Midterm elections

For some weeks now on our Fox News show "Political Insiders," I have been expressing my concern that if we look at the polls, we seem to have two elections going on.

With only days to go before the midterm elections we continue to see a true anomaly which is a strong national position for the Republicans nationally and yet a host of very close elections for dozens of key races in the Senate, House and for governor.

Despite millions of dollars spent on scorched earth negative television advertising, from both parties, the electorate seems strangely detached and disengaged from it all.

Frustrated, angry and scared as hell as American voters may be they just don't seem to be that engaged with the current campaign compared to past elections. And perhaps why should they be?

Record numbers of Americans say the U.S. is in actual decline, that their children, the next generation will be worse off than our current generation, worse off than their parents and the majority who feel that even if you play by the rules and work hard, ordinary Americans can't get ahead.  These historic negative sentiments are fueling an environment of concern, apprehension and even fear. -- Even if almost no one running dares to mention them.

However, in the key individual races in states every campaign seems only tearing down an opponent and almost none of the candidates from either party are offering real visions for how to revitalize America.

Yet, at the national level the picture could not be brighter for the Republican Party.

President Obama has been getting very low job approval numbers for some time. And opposition to his handling of various policies has become almost all negative. Huge majorities of voters believe the country is off track and going in the wrong direction.

The Obama administration has been beset by a series of political sinkholes. Leaving aside the long-simmering opposition to ObamaCare, and scandals like Benghazi, the IRS and Fast and Furious, in recent months we have had one disaster after another: Starting with the VA crisis where incompetence and indifference has led to the inability of our veterans to not only not get the health services they're due but even resulting in deaths.

The overwhelming of our southern border by unaccompanied immigrant children, which was not only a humanitarian disaster but has reinforced the belief among voters that the U.S. cannot control its borders.

The crisis in the Ukraine, where Russian President Putin has clearly read Obama's weakness as an invitation for his annexing of the Crimea and his de facto invasion of Eastern Ukraine.

Then there’s the Sgt. Bowe Bergdahl exchange which, despite laws to the contrary, saw the U.S. trade a soldier, whose conduct on the battlefield was questionable to say the least, being hailed as a hero by the Obama administration, and traded for four top Taliban terrorist leaders. Now the investigation into the prisoner exchange and Bergdahl’s conduct while serving in the military has been put on ice until after the election.

But wait, there’s still more. There’s the rise of ISIS and its sweep across Iraq, parts of Syria and the absolute breakdown of the Iraqi army to oppose it. For the first time we have a terrorist army occupying territory larger than the country of Belgium and routinely massacring, crucifying and raping the people whom it is occupying. And to that the strategy and action of the United States in response has been dubious in the eyes of most Americans. And now we have lone wolf attacks by terrorists in Canada and possibly in New York.

Finally, we have the handling of the Ebola crisis by the Obama administration which has come as its own October surprise.

Indeed there have been so many crises that have come so quickly, one on top of another, that it is understandable that it’s hard for voters to keep track of them all.

With all of this, as well as an economy that most Americans feel still is not benefiting them, history will tell us that voter sentiment should be favoring a landslide on behalf of the opposition party. Indeed, most but not all of the national polls seem to be breaking strongly for Republicans in the generic vote making the prospect of a landslide very real.

And yet, the opposition party, the GOP has not been able to lock down victories in Senate races even in red states. In race after race the polls tell us, heading into an election in 4 days, that the races still are too close to call.

I'm not sure anyone really knows the answer to this question but I want to offer some possible reasons.

1. As much as voters might want to chastise the president and the Democratic Party it's unclear that they are unhappy with rewarding the Republican Party whose brand has been highly negative since 2012.

2. Surprisingly, for most of the two year cycle since 2012, the Dems -- at all levels -- have been outraising the Republican Party by large margins. And they also seem to have had at least a semi-coordination of message even if it has not been particularly illuminating.

3. Of course, to this must be added, the overall alienation, cynicism and anger of a vast majority of voters towards the political class in Washington and what they feel is a government which no longer works for them. Which may explain why independent and third party candidates are doing better than ever and may be the decisive factor in many races.

Even if you credit the Democrats with running superior tactical campaigns in individual races -- which is quite disputable -- what still is baffling is why such a massive national mood is not being translated into an at least the traditional "throw the bums out" groundswell.

I think part of the answer lies in the failure of the leadership of the Republican Party -- and its allies -- to provide even a semblance of a positive message and secondly a failure to nationalize the 2014 campaign with a national campaign.

In 1994, the image remains of every Republican candidate running for Congress and the Senate standing together on the steps of the Capitol with their “Contract for America.”

In truth, no voters really knew what the Contract with American was, but there was at least the sense that Republicans were uniting around some kind of alternatives to the Clinton policies and were standing for real change.

Since the election in 2012, my colleagues and I on “Political Insiders,” have hammered away at the need for Republicans to put forth some kind of vision of what they would do to change the direction of America. And nothing has come. The country still waits.

Having abandoned a strategy of offering a party-wide positive vision the national Republican leadership has eschewed any kind of nationwide campaign message. Instead, more and more money and tens of thousands of political spots are being dumped onto voters in well less than half of the 50 states.

If you want to have a referendum election on the president, which all the evidence suggests would offer much promise, you could imagine the message as quite simple: how about national advertising which took the president's own statement about his policies being on the ballot and featuring either specific policies or even a montage reminding voters of all the terrible things they feel and ending with this, "if you don't like these policies, then send Barack Obama the message: vote Republican."

As the Fox News poll has been asking, if the president' policies were on the ballot, would you vote for them or against them, and the results have been consistently around 36 percent in favor, 58 percent opposed, one might think that would be a sagacious strategy.

But the failure to run a national message campaign, with national advertising in 2014, while it may not be a fatal mistake is a disastrous failure of political imagination.

If your intention is to ignite a national tide wouldn't you want to carry your national message not just in the states that you think are competitive but in places where you have candidates running who are under-funded and may not be on the radar screen?

In addition, it would provide a national framework around the individual contests being waged in states and districts. And believe it or not, it would be more efficient, less costly than to continuing to have to jam more ads into already oversaturated television markets in tight races.

It astounds me that the 2014 midterm election has not seen the utilization of a national campaign. Having a deserted the possibility of any positive platform the thematic imperative is crystal clear: SEND PRESIDENT OBAMA A MESSAGE -- ENOUGH! As Marshall McLuhan famously said, "the medium is the message."

For voters in this kind of an election, where the electorate is unhappy with everyone, why not go right to the heart of their dissatisfaction?

The reasons that the Republican Party doesn't have the imagination to have overlaid a national campaign – everywhere -- will remain a mystery.

Some will say it's because the consultants will make far less money on national advertising than they do in the knockdown, drag out state advertising.

I leave it to the reader to make their own conclusions. However, one thing stands out. If the results on Tuesday night are a surprising large Republican landslide, this question will be left to aficionados. However, if the Republicans come up short in an election they should have won easily this year, this question should be at the forefront of why they did not succeed.