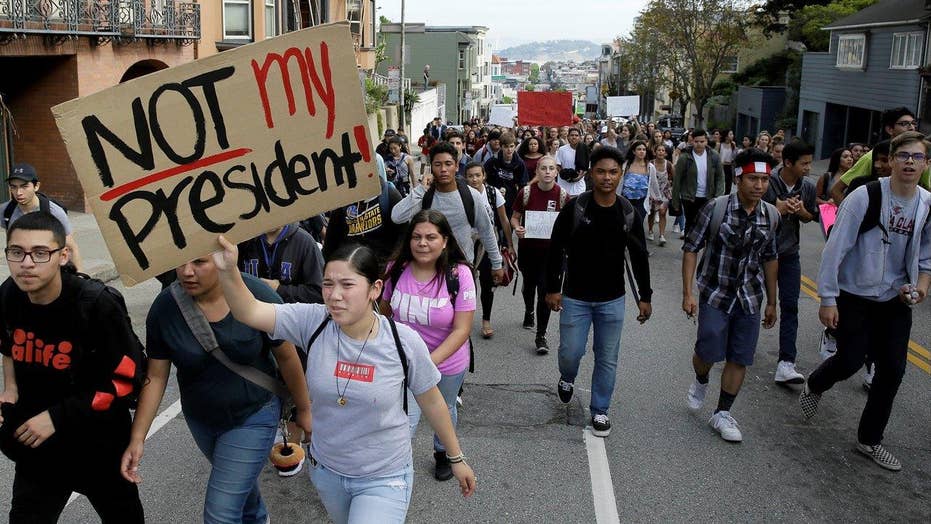 Anti-Trump demonstrators take to the streets in many cities

The White House urged protesters to do so non-violently; James Rosen explains on 'Special Report'

Right now many of the “Not My President” protestors are behaving like spoiled children who didn’t get their way. They are having tantrums. Some are breaking things. Some are getting violent.

This is how a two-year-old acts when they don’t get their way. What these protestors need is someone to show them how to man up. (I know, liberal academia banned that phrase, but actually, their attacks on manliness are part of what has led to their post-election temper tantrums, as the liberal elite have long told boys not to be men and then offered them nothing else they can be, but boys.)

Since I’m the author of a new book ("This Will Make a Man of You") that uncovers an ancient formula for building men and women of character, perhaps a few of them will pause and heed this advice.

First, this means, if they are 18-years-old or older, they should have voted. Many of the protestors didn’t vote. “More than half of the anti-Trump protesters arrested in Portland didn’t vote in Oregon, according to state election records,” reported Portland’s KGW. Next, this means following through on achieving whatever it is they are advocating for.

A mature adult doesn’t simply complain, they point out a wrong and offer a real solution. The “Occupy” movement collapsed because they didn’t even know what they wanted. It looked like a party. “Dude, everyone is camping out in downtown Manhattan, let’s go.” But then pretty soon everyone wanted a shower and to get away from all the criminals the camps attracted.

Okay, “gentleman” is considered to be a bad word by much of academia and the Left, but you know what, that’s part of the problem. By being polite a person isn’t just showing respect for others, they are showing respect for themselves. And if you think it’s not cool to be a gentleman, you need to read up. Gentlemen are honorable, courageous bad-asses who fight for good. Think Captain Kirk, James Bond or Superman, as all were gentleman.

If being a gentleman is too politically incorrect or foreign to you, think Gandhi. Protest peacefully.

If a reporter or anyone asks why you are there say love, not hate. A lot of conservatives voted against Hillary Clinton. These millions of voters will at least respect you if you show them respect. In that way, if your goals are honorable and just, perhaps you can sway a larger swath of the populace to you cause.

This isn’t the Vietnam era. You aren’t what your hippy professors once were or thought they were. Even much of what they did—spitting on returning soldiers and more—wasn’t right. If you were assaulted would you want a cop to be there? Police officers have spouses and children and are members of the communities they serve in. They also don’t set the policies. They are manning up to a hard job.

If you want to be taken seriously, be serious. Do you want that guy who just kicked in a store window to speak for you?

The Tea Party early on elected leaders and it has endured despite constant and dishonest mainstream media attacks and some real resistance from the establishment, because they organized.

Consider the West Point code, as it is brilliant for its brevity: “A cadet will not lie, cheat, steal or tolerate those who do.” It is easy to remember and it rules out passive injustice by forcing anyone living under it not to “tolerate those” who lie, cheat or steal. This makes it an antidote to so much of what this generation is taught about their relationship to society and authority. You are not an individual rebelling against a fascist regime; you are a free citizen who knows that freedom isn’t free. Act like it.

Paying a protestor is like paying someone to be your fake friend. The “protestor” who takes the money is no longer a protestor; they are an instigator. No worse than that, as they are wearing the guise of a passionate citizen utilizing their First Amendment-protected right to protest and they are doing this for personal profit. You should toss these fakes out of your protests.

A man—and by this I mean a mature person—says what they mean and follows through. They can openly change opinions with new information, but they are men of action. Of course, this means you actually have to know what you want. If it’s only not to have a President Donald Trump, then you must wait for the next election; otherwise, what you’re advocating for isn’t a peaceful transition of power, but a revolution that upends the U.S. Constitution. If you want something else, then man up and articulate it.