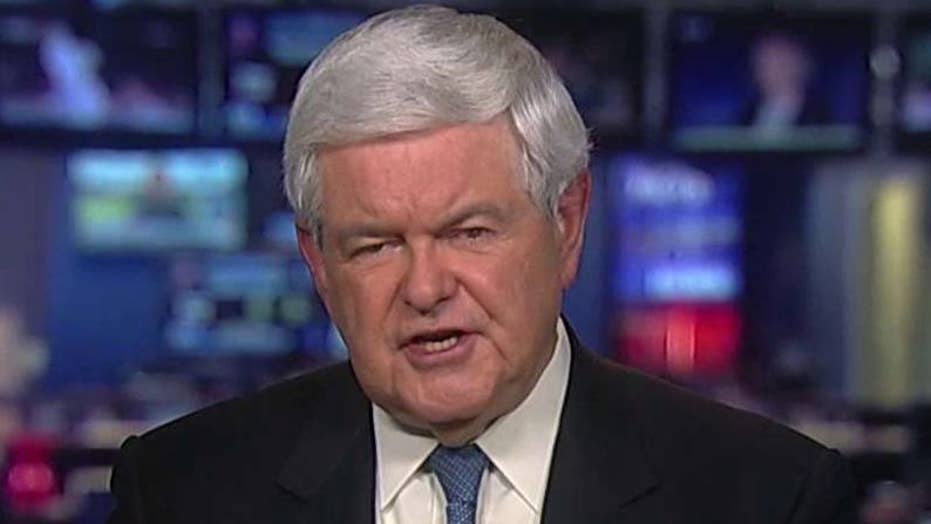 Former speaker of the House weighs in on 'Hannity'

We have now finished two weeks of two conventions by two parties. For Americans who watched both presentations, the contrast was jarring. They weren't just offering two different political visions. In many ways, they were offering two radically different versions of reality.

In that sense, the gap between the two conventions was an accurate reflection of where we are as a country. There really are two very different visions of reality competing in the political campaigns underway this year--with their own value systems, sets of ideas, and interpretations of the facts.

The version of reality that many Republicans, Independents, and even some Democrats are experiencing was the basis for the Republican convention in Cleveland.

In the Republican understanding of reality, the country is on the wrong track, the government isn’t working, and the problems are getting worse.

Republicans see a country in which the threat from terrorism is increasing here at home and around the world.

They see a country in which crime is getting worse, murders are up 70 percent in Chicago, and police officers are being assassinated at the highest rate in decades.

They see a country in which the border is not secure and the political class has done nothing about it.

They see health care costs going up, with a new law that makes it more complicated and gives people less choice about what doctors they can see.

They see a country in which the economy has left ordinary middle class Americans behind and fewer people are working.

That’s the Cleveland version of reality.

The Philadelphia view is very different.

Democrats see a president who is relatively popular and who has achieved a great deal of his agenda. They see a first lady who is a good role model and who is even more popular than the President. In this version of reality, eight years of their administration have worked pretty well.

They and their highly educated friends have good jobs and more influence.

They see their health care law as a statistical success, even if it remains unpopular.

They see major victories on social issues--although they would like to push the boundaries even further.

They see terrorism as a persistent but manageable problem in which the intolerant and Islamophobic West occasionally provokes clinically insane people to violence.

They see crime as low by historic standards and not a major national priority, except for the special case of gun control.

They see police abuses and police killings of innocent people as widespread and the product of racism.

These are two very different versions of reality in America.

Both are based on real facts and feelings, assessed using very different value systems.

If you accept the Cleveland version of reality, you are far more likely to understand the appeal of Donald Trump, who wants to keep Americans safe and would drastically change the bureaucratic systems you see as failing.

On the other hand, if you accept the Philadelphia version of reality, you are comfortable with a candidate like Hillary Clinton who wants to make minor changes to the status quo.

The Bernie supporters are a special case. They are a little of each. This faction of the Democratic Party is not happy with the status quo, and it makes a critique that is surprisingly similar to that of Trump’s populist rebellion within the GOP: the system is rigged, the wealthy and the well connected are exploiting the rest of us, and our foreign policies have failed.

Where the Sanders wing of the Democrats departs from Trump’s populism is in their solutions.

These versions of reality in America are about to collide at the ballot box. When the American people vote in November, in part they will be deciding which version of reality is more real than the other.