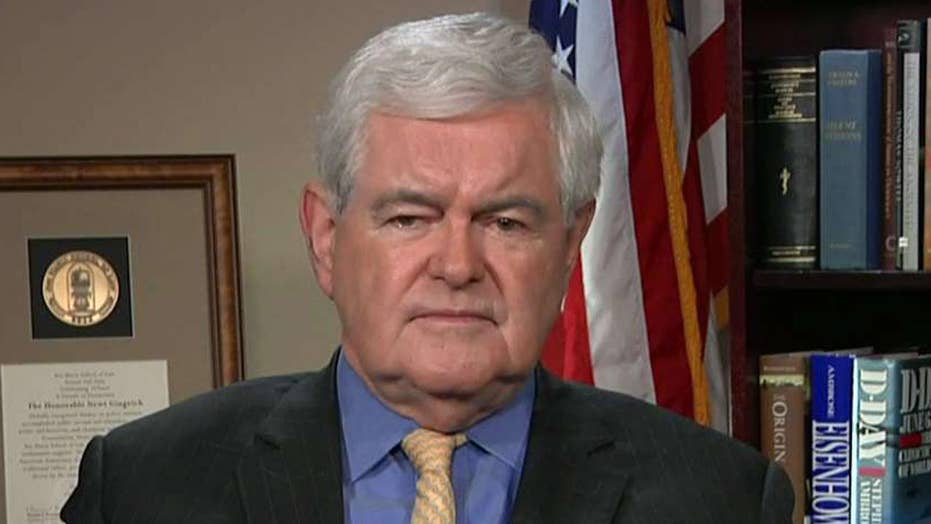 Newt Gingrich: Left have lost all touch with reality

After nearly five months of his presidency, the liberal media and the Washington establishment still don’t understand Donald J. Trump.

President Trump is different from any political leader we’ve seen in the presidency – at least since Andrew Jackson (1828-36). As a result, reporters and those in the elite political class literally have no idea how to understand him. Each day, they are faced with a president who doesn’t fit the norms of politics as usual, and their persistent instinct has been to attack.

I have watched this hostility since then-candidate Trump announced his bid for the presidency at Trump Tower nearly two years ago on June 16, 2015[CM1] .  It is a major reason why I decided to write Understanding Trump, which was released Tuesday.

In fact, President Trump’s candidacy announcement, as I explain in the first chapter [CM2] of "Understanding Trump," is a great case study on how completely incapable the D.C. media insiders have been in comprehending the President – and why the American people elected him.

“Think about the torrent of criticism Trump received for his announcement event at Trump Tower. In addition to the intense criticism he received for what he said about people who are in the country illegally, Trump was mocked for ad-libbing his speech, boasting about his wealth, and his theatrics. The elites snubbed him, but his message resonated with normal Americans.

“Trump understood that since he was running as an outsider, the more he sounded like a politician, the more it undercut his message. So he abandoned his prepared remarks and spoke extemporaneously. This choice to go without the security of written text at such a big moment was, in fact, an act of extraordinary message discipline. The pundits accused him of ‘rambling.’

“Trump also understood that most Americans believed that their voices were not being heard, that the only people whom politicians listened to were ones who could cut big checks. So Trump spent a lot of time boasting about his wealth and promising to self-finance his campaign. In the following days, much attention was paid to whether Trump was really worth $9 billion, as he claimed, or if he was worth ‘only’ about $2 billion.

“The frustrated voters Trump was reaching out to heard only one word—billion. And they understood that they finally had a candidate who would not be bought.”

The media’s immediate reaction to President Trump’s announcement was full blown hostility. They couldn’t imagine that people would ever consider him a serious candidate. They didn’t care what he said. They didn’t care how the American people responded to his message. But within a few weeks, the media’s offensive had completely failed.

“After weeks of nonstop media criticism and declarations that his announcement in mid-June had been a disaster, the first polls were released that included Trump. After one month of Trump campaigning, he was leading in an average of all the polls, and he lost the lead only for one three-day period for the rest of the primary election.

“You would think this would have been cause for the media and establishment voices to pause and reconsider their assumptions about Trump, but the coverage and analysis has only gotten worse from there.”

Twenty-four months later, the hostility hasn’t changed a bit. The elite reporters and pundits remain baffled and predisposed to attack a president they don’t understand.

I wrote "Understanding Trump" for the grassroots activists across the nation who are dedicated to holding Washington accountable and ensuring it once again serves the American people, instead of the big government, monied special interests and political influence peddlers.

Just this month, a reporter asked me via email to comment on a story. The entire premise of the clearly biased article was that President Trump had been undoing Obama initiatives but not replacing them with anything of his own.

I responded by rejecting the entire notion.

Congress is grinding forward on health care, tax cuts, deregulation, infrastructure, and rebuilding the military – any one of which could define a presidential legacy. I reminded the reporter that it took nine months to pass President Ronald Reagan’s tax cuts and 18 months to pass welfare reform when I was Speaker.

Citing the current bull market being spurred by the surge in small business, entrepreneurial, and CEO confidence, I pointed out that in the first five months of the Trump presidency, the Trump effect has added $3.3 trillion to stock values[CM3] . This is nearly four times the size of Obama’s media-lauded $900 billion stimulus package in 2009.

Finally, I told the reporter the misguided assertion completely ignores President Trump’s meeting in Riyadh, Saudi Arabia, which resulted in over $400 billion in contracts for American jobs and the potential for a Sunni-American alliance.

Not surprisingly, my comments weren’t included in the article.

This constant attack by reporters, pundits, and the political elite is going to continue. But I didn’t write this book for them.

I wrote "Understanding Trump" for the grassroots activists across the nation who are dedicated to holding Washington accountable and ensuring it once again serves the American people, instead of the big government, monied special interests and political influence peddlers.

This book is for those fighting to repel the elite media offensive and those who want to know how they can better help President Trump drain the swamp and steer our country toward a much brighter, more prosperous future.

Finally, I wrote this book to help the millions of Americans who elected President Trump to understand him, as I understand him – as an incredibly smart, successful, passionate leader, who loves this country and sincerely wants to make it great again.