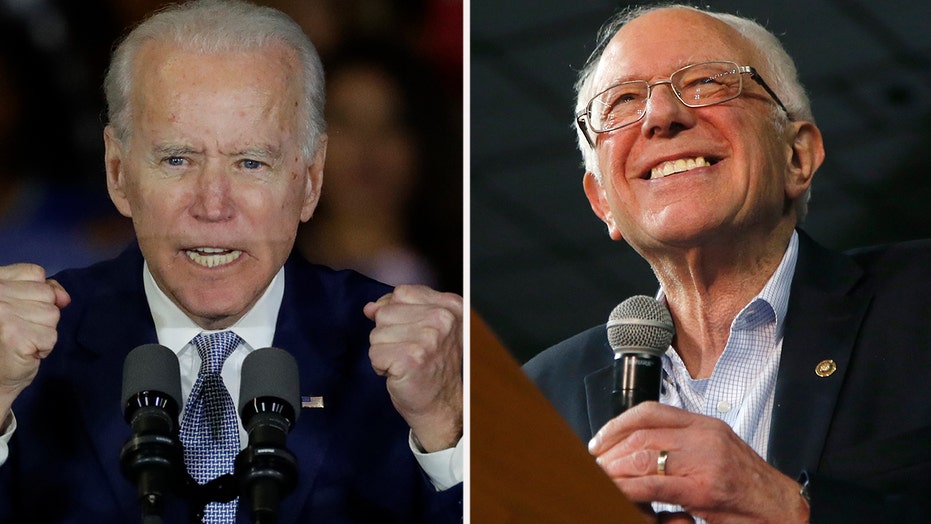 One week ago, no one expected the current race for the Democratic nomination.

Remember this the next time you see or hear one of us so-called experts on television or radio confidently predicting a future we don’t understand.

With the backdrop of the emerging coronavirus threat, the wild swings in the stock market, the signing of an Afghanistan peace plan, the Chuck Schumer attack on Supreme Court justices, here is what happened in seven short days.

AOC BLASTS DEMOCRATS WHO WON'T BACK A SANDERS NOMINATION

Former Vice President Joe Biden went from being almost out of the race to being the front runner and probable nominee.

Sen. Bernie Sanders, I-Vt., went from being the strong front runner and probable nominee – who was going to sweep Super Tuesday – to being a battered and isolated challenger underdog who may not have a path to the nomination.

Former South Bend Mayor Pete Buttigieg went from being a media darling, to having an incredibly weak showing in South Carolina, to withdrawing and endorsing Biden.

Sen. Amy Klobuchar, D-Minn., got remarkably few votes in South Carolina and faced a devastating series of defeats on Tuesday. So, she withdrew, endorsed Biden, and flew to Texas to join him on stage at a rally on the evening before the state’s primary.

Former New York City Mayor Mike Bloomberg, after spending more than $620 million, figured out his debate disasters had wiped out the positive effect of his advertising and withdrew, also throwing his support to Biden.

Sen. Elizabeth Warren, D-Mass., stayed in a few extra days, but after coming in third in her home state to Biden and Sanders decided she, too, was withdrawing. As of now, she has not endorsed anyone (although remember in 2016 she endorsed former Secretary of State Hillary Clinton over Sanders).

Now, the race is down to Biden and Sanders, with the Democratic National Committee preparing to change its debate eligibility rules to keep Rep. Tulsi Gabbard, D-Hawaii, off the debate stage. Standing with two old white guys, she could maybe make an appealing contrast and represent a last stand for diversity – but not with the Democratic establishment that hates her firmly in control.

Biden and Sanders find themselves with real dilemmas, but the dilemmas are different for each candidate.

In Biden’s case, he is already looking ahead to the general election against President Trump. A major selling point in the flood of endorsements is the belief among establishment Democrats that Sanders is simply too far to the left. So, one challenge for Biden will be to communicate that he is more reasonable. (His campaign and the media will use the word “moderate,” but the fact is Biden is well to the left of Obama and without Sanders in the race it would be obvious how many of Biden’s positions are opposed by most of the American people.)

However, if Biden over-emphasizes his differences with Sanders, he may make the convention in Milwaukee unmanageable. The left-wing activists might see the party establishment once again supposedly stealing the nomination from the left-wing challenger.

Biden must be asking himself if his major goal should be, like Bill Clinton in 1992, to find a “Sister Souljah” moment to take on the hard left and repudiate one of its more unpopular positions. Or, should Biden adopt the principle of “no enemies to the left” and keep absorbing the ideas and proposals of Sanders and his supporters? This could lead to a more unified Democratic National Convention – but unity might come at the expense of independent voters and moderate Democrats who conclude that Biden is so close to the Sanders’ positions that he is simply too big a risk to become president.

Meanwhile, Sanders has his own dilemma.

If he wants to become the Democratic nominee, he has to take Biden down. This means speeches, advertising, and debate performances that are harshly critical of Biden and expose his many weaknesses. Biden is potentially susceptible to attacks on his family making money overseas, or his past positions to a whole series of issues which now run afoul of left-wing canon.

Still, a truly effective, harsh assault on Biden may alienate those Democrats whose primary focus is on how to beat President Trump. There may be a real penalty among party loyalists for either candidate if they are seen as weakening the Democratic Party’s chance to beat the president.

All of this will begin to be obvious in the next few days.

Sanders cannot get back into the nomination race without forcing major differences with Biden and pushing the former vice president in the hope that Biden will make a major mistake.

Biden cannot become passive and look toward the general election until Sanders has been defeated. Bloomberg’s passive debate performance was a vivid reminder that remaining passive while being attacked looks like a combination of weakness and guilt.

The race is very different than we thought it would be a week ago, but it remains incredibly interesting – and in many ways still capable of great surprises.