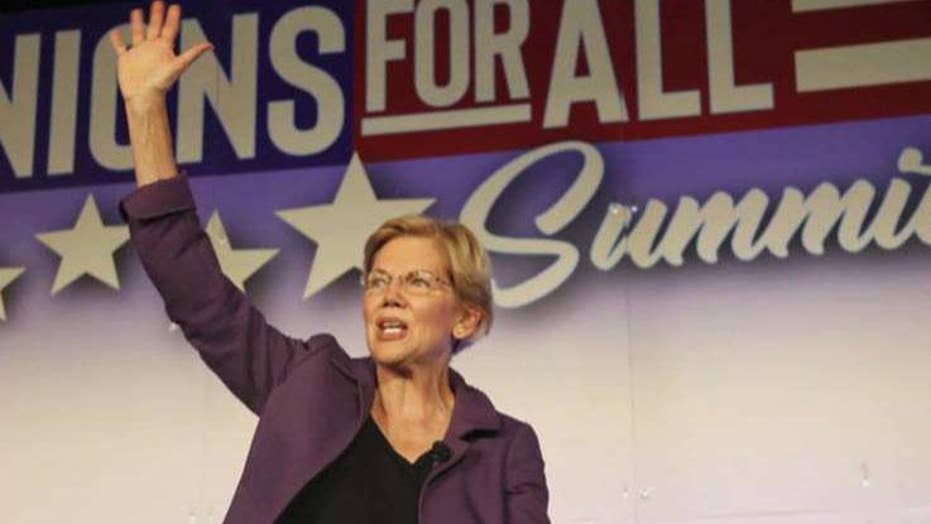 Colin Reed and Michael Meehan weigh in on whether or not presidential hopeful Elizabeth Warren would win in a head-to-head matchup against President Trump.

Tuesday night’s Democratic presidential candidate debate was one more reminder that we are living through the death of the Democratic Party. It is being replaced by a new Democratic-Socialist Party.

If you think I exaggerate, consider these examples.

Imagine what would have happened if any candidate in the debate had the courage (or lack of sense) to actively defend President Bill Clinton’s policies on welfare reform, capital gains tax cuts and balanced federal budgets, or his 1996 State of the Union assertion that “the era of Big Government is over.”

RONNA MCDANIEL: FOURTH DEMOCRATIC DEBATE WAS ANOTHER WIN FOR PRESIDENT TRUMP AND GOP

Imagine that any candidate had agreed with President Barack Obama’s original 2008 position that “I believe marriage is between a man and a woman. I am not in favor of gay marriage.”

Or imagine that a candidate had defended ObamaCare as the solution to health care in America.

Rep. Alexandria Ocasio-Cortez of New York is now the spiritual leader of House Democrats. And every major Democratic presidential candidate has endorsed radical Green New Deal-type proposals that would expand government, destroy the energy industry, radically change America, and plunge the economy into a depression.

The Democratic-Socialist Party wants to outlaw private health insurance, punish the successful (especially the wealthy), and expand government control over virtually everything.

In 2020, every Democratic candidate will be faced with the challenge of defending a national party that is now the Democratic-Socialist Party.

The Democratic-Socialist candidates embrace policies ranging from wanting to confiscate guns; forcing the radical California gender curriculum on every state; removing the tax exemption for every church, synagogue, and mosque that defines marriage as between a man and a woman; providing free (meaning taxpayer-funded) health care to people living in our country illegally; and opening the border so anyone and everyone will be able to enter the United States without having to worry about immigration laws.

Some of these radical candidates favor tax-paid sex-change operations in prison – and genderless prisons (one of Biden’s contributions to the dialogue) so male criminals could declare themselves female to be sent to women’s prisons.

Imagine that one of the candidates had said he or she was against abortion. The result might have been a riot – and at a minimum an expulsion of the heretic. Instead, the new Democratic-Socialist Party stands for abortion on the last day of pregnancy, and its most radical acolytes are now for infanticide after delivery as long as “the infant would be kept comfortable” (see the New York state law endorsed by the Democratic governor of Virginia).

Almost equally heretical would have been a candidate defending Columbus Day (favored by 57 percent to 29 percent of the public, with the Democratic-Socialists once again in a position favored by about a quarter of the country).

Imagine that candidate attacking the National Education Association’s pledge that “educators must acknowledge the existence of White supremacy culture as a primary root cause of institutional racism, structural racism, and White privilege. ...the Association will actively advocate for social and educational strategies fostering the eradication of institutional racism and White privilege perpetuated by White supremacy culture.”

White supremacy culture is left-wing code for American history, American exceptionalism, the rule of law, the Constitution, and the various habits and patterns that made America the most prosperous and powerful nation in history.

Can you imagine one of the candidates in the debate arguing that our schools should not be centers of anti-American indoctrination dictated by left-wing unions? Of course not. They would be booed off the stage.

As The Wall Street Journal put it in an editorial headlined “Warren and Sanders, Policy Mates.” the pattern is overwhelming:

The editorial says this about Warren and Sanders: “They both would force these companies to get a new federal charter requiring them to consider ‘stakeholders’ rather than shareholders in their business decisions. They both want to reimpose the old Glass-Steagall fence between commercial banking and investment banking. 'The business model of Wall Street is fraud,’ Mr. Sanders likes to say. Ms. Warren also thinks bankers are crooks: 'Wall Street is looting the economy.’ They agree the U.S. Postal Service should become a bank that offers government checking accounts and would compete with private banks.

“On college as an entitlement, the two again see eye to eye.  'It’s time to cancel student debt and make universal free college a reality,’ one says. The other reverses the order: 'We are going to make public colleges and universities tuition free, and cancel all student debt.’ For the record, Ms. Warren’s plan is the first one.”

There are a scattered handful of traditional liberal Democrats in the House and Senate, but none have any chance of ever being a national candidate in the emerging Democratic-Socialist Party.

We are watching a historic moment in which a once-great American political party is transformed into an anti-American engine of radical change. In 2020, every Democratic candidate will be faced with the challenge of defending a national party that is now the Democratic-Socialist Party.

It will be a wrenching, defining moment for the party of Presidents Franklin Delano Roosevelt and John F. Kennedy if it is conquered by the party of AOC, Sanders and Warren.